Dieppe: Sunday at the beach

With our Rouen friends we drove up to Dieppe, a town of about 35,000 on the English Channel, for lunch and an afternoon on the coast on Sunday. We were very lucky to have sunny, if windy, weather for the whole day. Dieppe is about an hour's drive north of the city of Rouen (pop. 500,000 or so in the metropolitan area).

The Michelin green guide for Normandy describes Dieppe as "the beach closest to Paris" and "the oldest French seaside resort," adding that "the harbor is modern but many old corners and alleys remain," making Dieppe "one of the most unusual towns in Normandy." I had been to Dieppe years ago, but only briefly, and Walt never had. 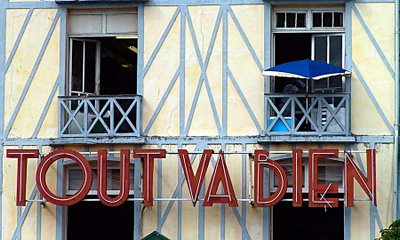 A café on the harbor at Dieppe that has a nice name
For lunch, Marie had made reservations at a little restaurant called Les Ecamias, located on one of the main streets along the big boat basin at Dieppe. Like many of the old fishing ports along the French coast, Dieppe's harbor now receives more pleasure boats than it does working fishing vessels. 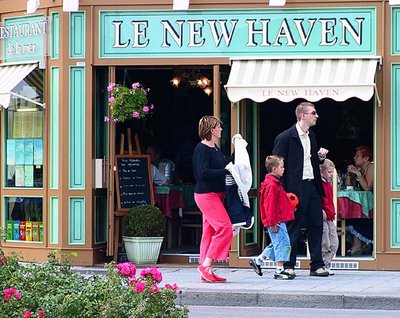 A restaurant on the harbor at Dieppe. From Dieppe there is car ferry
service to the town of New Haven, on the coast of southern England.
For lunch, Walt and I had mussels and French-fried potatoes — moules frites in French — and our friends both had aile de raie au beurre noisette — skate wing with brown butter. Walt had his mussels marinière style, which means steamed in white wine with butter, shallots, and parsley. Mine were prepared à la crème, which means they were cooked the same way but cream was added to the broth at the end of the cooking. Normandy is famous for its good cream and butter.

As appetizers, two of us had half a dozen oysters on the half-shell. That's what I had, and they were excellent, I thought. The other two of us had little shellfish called amandes de mer — sea almonds — cooked in a parsley-garlic butter like snails. They reported that the amandes, which are like little scallops with a reddish-brown shell, were excellent as well. 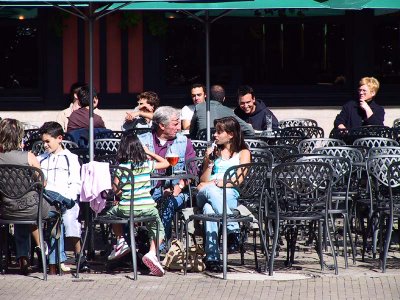 People enjoying a sunny afternoon at a café in the shopping district at Dieppe
The weather has been cool and cloudy a lot in August, and there has been so much talk on the radio about the end of summer vacation and what is called la rentrée — the start of a new school year and work year — that it was easy to forget that it really still is summer. On Sunday August 27, Dieppe was full of tourists, many British, and French vacationers and day-trippers, like us.

After lunch, we walked through the old town of Dieppe and stopped in the two big churches, St-Jacques and St-Rémy, to take pictures. At St-Rémy, an organist and three singers were rehearsing for an evening concert, so we stopped and listened for a while. There were quite a few people strolling through the streets, and a few shops were open. 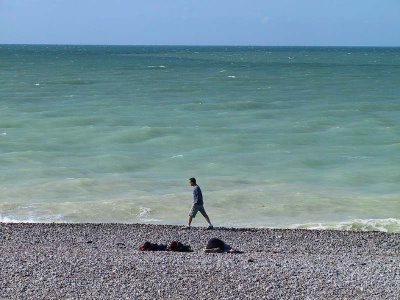 The beach and the sea at Dieppe
Afterwards, we took a long walk along the seafront. There were hundreds of people out. It was sunny but pretty windy on the beach, so there weren't many people sunbathing or swimming, even though green flags were flying along the boardwalk to indicate that swimming was safe. 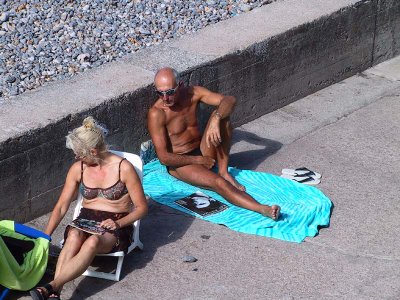 Sunbathers found shelter from the stiff wind on the beach at Dieppe
The beach at Dieppe is not sand. It's millions of little rocks that have been worn smooth by the action of the waves washing onto the shore. There are little cafés and restaurants along the seafront, and there's also a big amusement park with rides. The city is famous for its kite festival — which to me is a good indication that it's often windy there the way it was on Sunday. 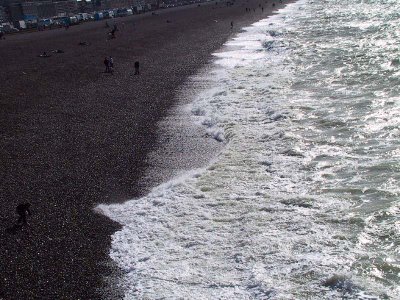 Waves crashing on the shore
At the end of the promenade along the beach, there's a long jetty jutting out into the sea to protect the entrance to the harbor. The huge car ferries from New Haven, four hours away in England, steam in several times a day and dock at the outer edge of the harbor to unload cars and people. As I've said, Dieppe was full of English people on Sunday afternoon. 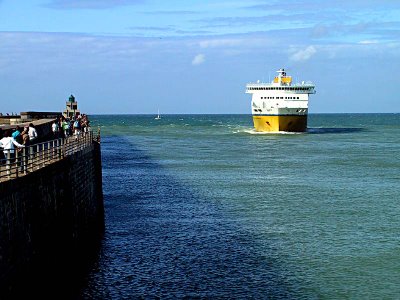 A car ferry coming into the port at Dieppe Sunday afternoon
We walked out to the end of the jetty. We got sprayed by waves breaking against the structure a couple of times. A lot of people were fishing. We spotted the ferry out on the horizon, and by the time we had walked back along the jetty to shore it had arrived in the harbor. We stopped in a café near the harbor for a drink before driving back to Rouen.
Posted by Ken Broadhurst at 20:15