Walt took Tasha to the groomer's on Tuesday for a bath, brushing, and trim. All went well. On the way back home, he stopped at the boulangerie in our village to buy some bread. (We still can't get yeast, so we can't make our own breads. The fact is, it's hard to make bread that's as good as the bread you get in a good French bakery.) Walt came home with two little individual tarts like one below for our dessert. It's a disk of pâte sablée (cookie crust) covered with fresh strawberries standing at attention on a layer of lemon custard. 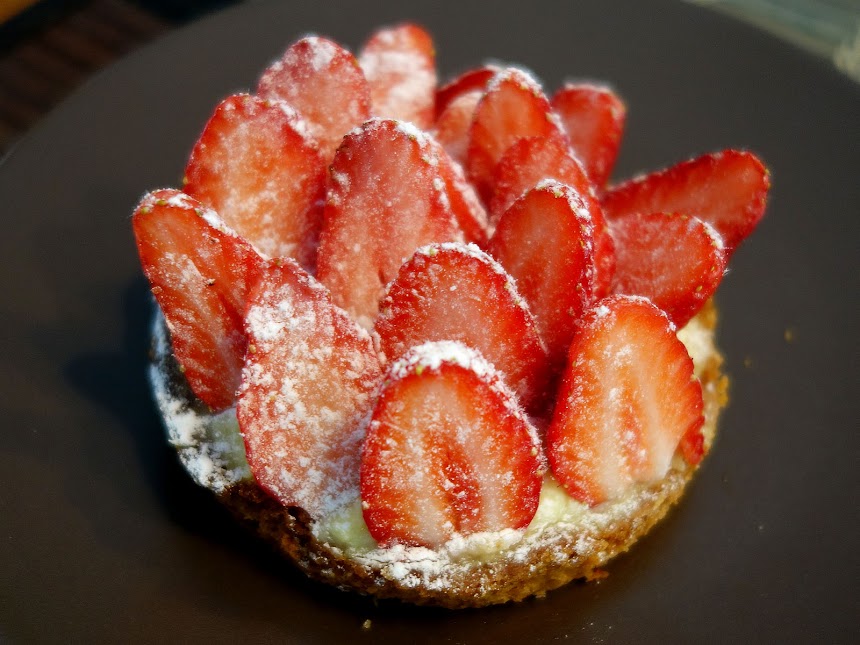 Meanwhile, I needed to go to the pharmacy yesterday. It was the first time I'd been out wearing a mask. My glasses fogged up, which was a pain. There were six or seven other customers inside the shop, or standing out front in the parking lot, waiting for the people inside to leave before entering. I think the rule is that there shouldn't be more than six customers inside at any given time.


With one exception, everybody was wearing a mask, but not many people had gloves on. I did, in fact. Some people were wearing their mask over only their mouth, leaving their nose uncovered. Maybe their glasses had been fogging up like mine. Leaving your nose unprotected doesn't seem like a good idea to me. Advice on how or why to wear a mask varies widely.


When you come right down to it, I'm convinced that the best solution for now is to stay at home if you possibly can. I'm waiting for post-confinement reports on the number of new French cases of Covid19 before I become more adventurous about going to the supermarket or into other shops or stores.

I would like to go out for a drive in the country, which is always so green and beautiful at this time of year, and I might just do so when the weather improves again. Yesterday was another chilly day. We've had nearly two inches of rainfall over the past four days. Our part-time neighbors from Blois arrived yesterday. They were out in the rain trying to mow the tall grass that has taken over their big yard.


Walt says he might go down into Saint-Aignan on Saturday to see if the open-air market is set up and operating. We'd really like to get some good local strawberries and asparagus, and the vendor who sells those just might be there. Masked, I imagine, but we'll recognize him.