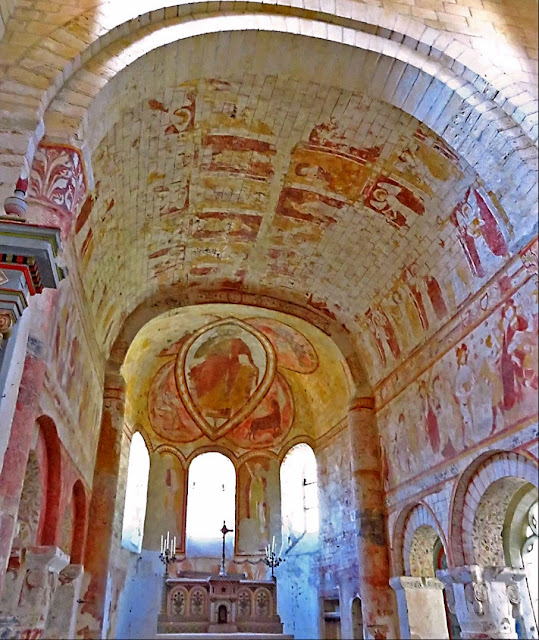 St. Genès (or Genest, Genêt) was a Roman actor who converted to Christianity during a performance and later was martyred. The church in Lavardin is dedicated to his memory, as are churches and chapels in about 10 other towns all around France, including Metz and Flavigny-sur-Ozerain. A dozen French towns towns also carry his name. 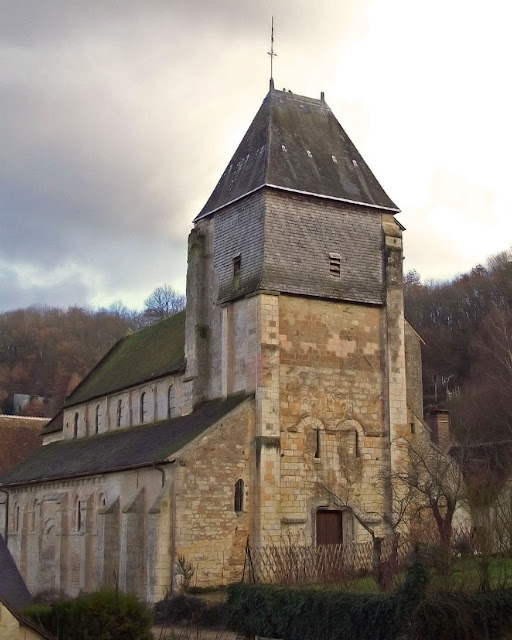 L'Église Saint-Genest de Lavardin — I haven't read anything that explained why the church is dedicated to him — is famous for the wall paintings inside the church, which date back to the 12th century. The church itself was more than likely built in the 11th century, or at least construction was started then. Here's what it looked like when I was there in January 2004. 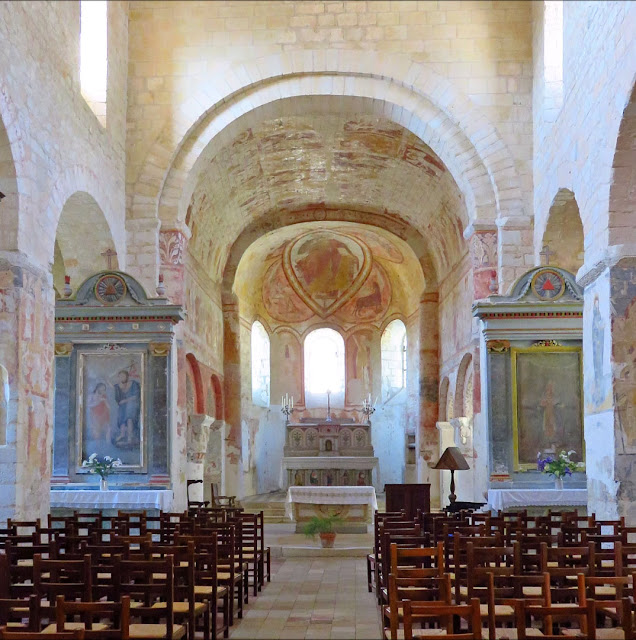 Back then, Walt and I drove up to Lavardin and Vendôme from Saint-Aignan just for a day out, after feeling a little confined because of miserable winter weather through December and January. We took advantage of one of the first nice days we'd had in two or three months to enjoy an excursion. I didn't really know anything about Lavardin at that point, but Walt and I had drive through the village in June 2001, when we were spending two weeks in the wine village called Vouvray, nears Tours. We didn't go inside the church, however. We didn't know about the wall paintings inside. This is another view of the interior of the St. Genest church. 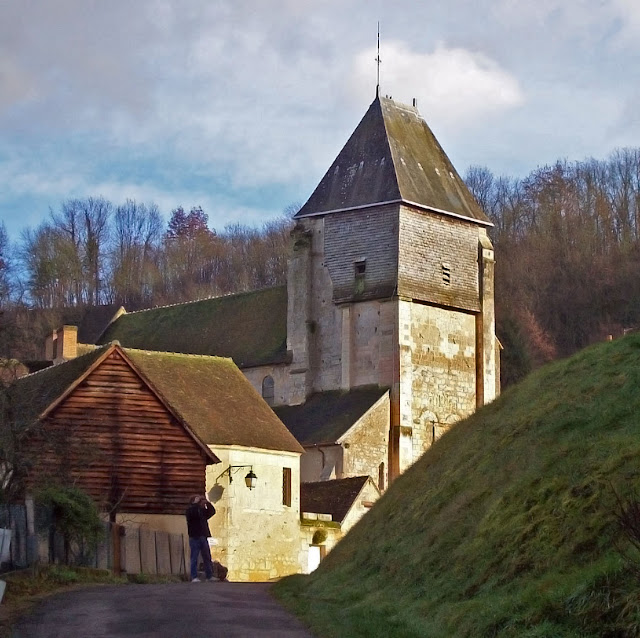 Here's another photo of the church. It's bathed in the light of the afternoon sun on January 25, 2004. That's Walt on the road taking a photo. I went back to Lavardin in 2015 with my friend CHM and finally went inside the church to take some photos. It was more interesting and the murals were more extensive than I had imagined. 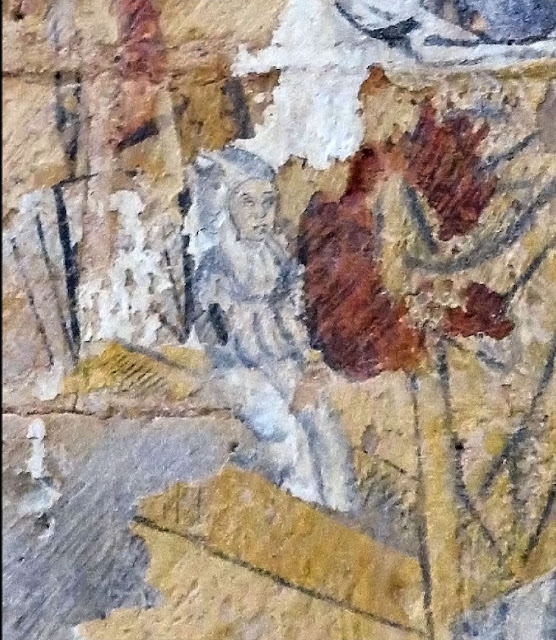 I took these pictures of the murals using a Canon SX700 HS camera that I don't even have any more — I gave it to a friend in 2018 because I had another camera that I liked better, a Panasonic. But I have to say the Canon camera did a very good job inside the Lavardin church. I've posted some of the photos as slide shows and others in other blog posts over the past five years. 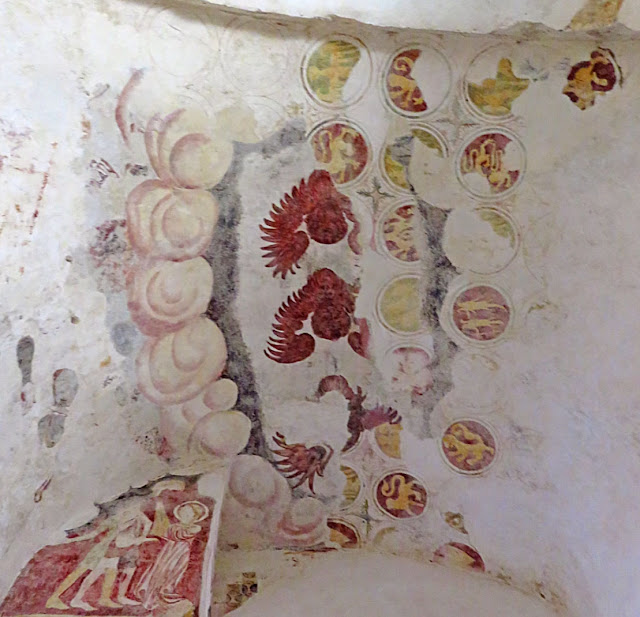 This painting, or what is left of it, looks fairly mysterious, I think. If you have any ideas about what it represents, I'd appreciate hearing them. 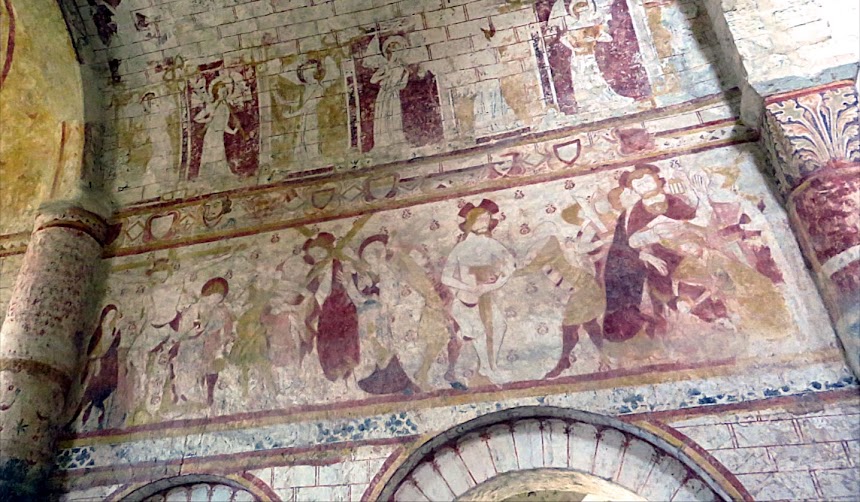 These wall paintings in the church at Lavardin were hidden by a coat of whitewash or plaster for two or three hundred years and re-discovered in the early part of the 20th century, just before World War I. They've been restored in recent years.