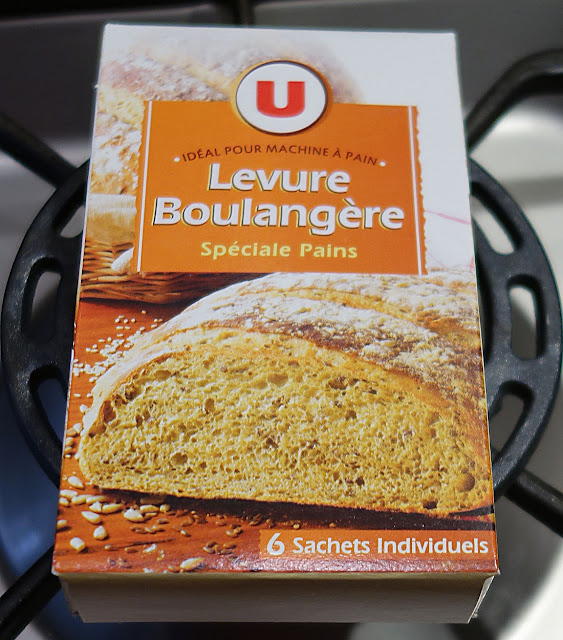 Levure is a confusing term in French for us anglophones. In English "yeast" is what you you use to make leavened bread. In French, you have to specify that it's bread-making yeast by saying levure boulangère or levure de boulangerie— bread-baking or baker's yeast. That's because the other kind of levure — what we call "baking powder" — is called levure chimique in French. It's "chemical yeast" as opposed to natural yeast. Natural yeast is a living organism that in French is called un champignon.
"Chemical yeast" (baking powder) is what we use to make cakes and what we call "quick breads" like zucchini bread or banana bread. Those kinds of breads are not called "bread" in French but cakes. Yes, that's a French word, and it's pro-nounced [keck]. Un cake is baked in a loaf pan rather than in a "cake pan."
Be all that as it may, we finally got yeast. The yeast we got is called spéciale pains. It's marketed as bread yeast and as idéal for use in a bread machine (une machine à pain or MAP). The total amount of yeast in the box is 30 grams — one ounce — divided into 6 little 5-gram envelopes. 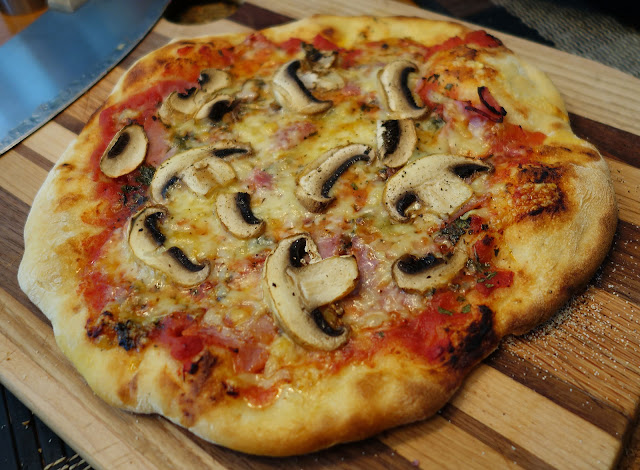 So Walt made pizza for lunch yesterday. He uses a no-knead recipe that involves making the dough — flour, water, yeast, and salt — 18 hours before you plan to cook the pizza. He makes the dough at about six p.m. the day before for lunch at noon the next day. It makes a good crust — crispy but not too crispy, bready inside. Chewy. (Can you tell I love bread?)

We topped the pizza with tomato sauce, ham, grated Comté cheese, and mushrooms. We're out of our own tomato sauce from last year's vegetable garden, so we had to use commercial sauce. We put thinly sliced raw mushrooms on top of the grated cheese, with the sauce and ham underneath. We make two individual-size pizzas and eat the first one cut in half before putting the second one in the oven, on a pizza stone, to cook. Then we eat that one while it's hot.
Posted by Ken Broadhurst at 06:45