A côte is a rib, and a côte de bœuf is a rib of beef, a rib steak, or a rib roast. It's thicker than your average steak, but smaller and thinner than a full roast. In France,the côte de bœuf is generally a single rib, unlike American prime rib, which is several ribs cut to be cooked as a roast in the oven.

We cooked a côte de bœuf on our new gas barbecue grill yesterday. It was a big success. Delicious. It's not something we eat often. But Walt has mastered the new grill already. He seared the meat on both sides on a very hot grill. Then he turned the heat down and let the meat cook for 10 or 15 minutes. After that, it went on the warming rack under the domed lid of the grill with the burners turned off and it rested for as long as it had cooked, about 25 minutes. 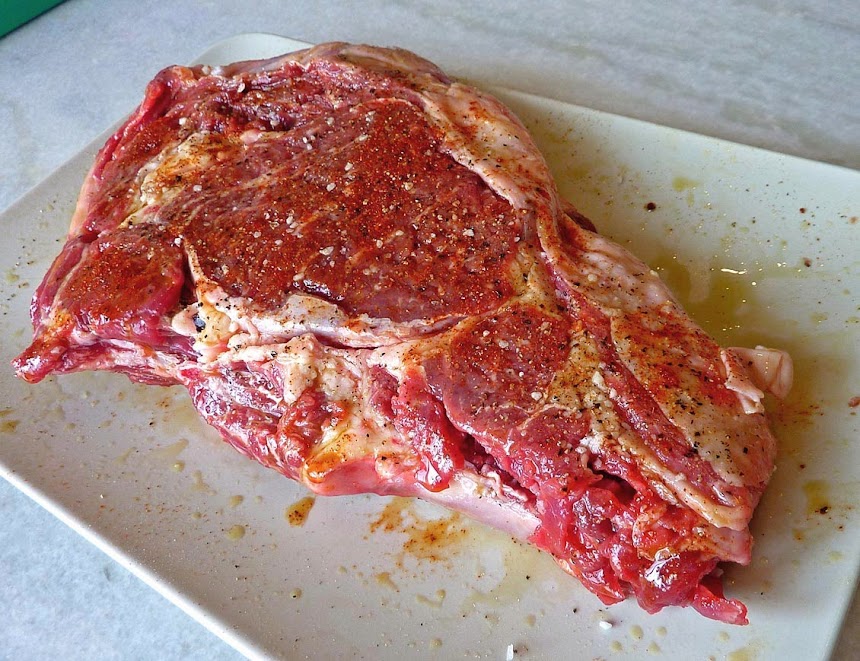 This côte de bœuf was 2 inches (5 cm) thick and weighed about 800 grams, or about 1¾ lbs. It cost just less than ten euros. I removed the bone with the idea of cutting the beef into two steaks, each one inch thick. I dropped that idea, though, and decided to pound the boneless steak with a batte / attendrisseur à viande to tenderize it and flatten it a little, for quicker cooking.

Some people from other countries tell me they aren't crazy about French beef, but I don't understand why. It might not be as fatty and tender as American beef, but it is tasty cooked either fairly rare or slow-cooked (braised, boiled) until it's nearly falling apart. American beef can't be imported into France because the French authorities object to the growth hormones that beef cattle are treated with. French cattle are grass-fed rather than fattened on so much corn, so the meat is leaner and has a different appearance and taste.
Posted by Ken Broadhurst at 07:40