The wild life in La Brenne

Here's something that has made me happy: the speed of our Internet connection doubled yesterday. I placed an upgrade order with Orange.fr and 24 hours later it was filled. Now don't think we are speed demons. Our old connection was 1 Mbps. We live out in the country, pretty far (as DSL goes) from a phone switching station. We are lucky to have broadband Internet service at all.

Now we have 2 Mbps for downloading data and 260 kbps for uploading. I can feel the difference when I open certain sites and when I upload pictures to my blog. The funny thing about the upgrade is that we were paying 26.46 euros a month for the slower service. The price of the faster service is 21 euros a month. What's not to like about that? 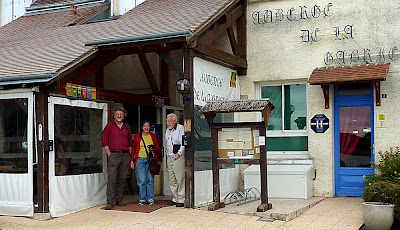 Simon, Susan, and CHM posing in front of
the Auberge de la Gabrière after lunch
Another thing that makes me happy is a good lunch with nice people in a not-too-expensive restaurant. That's what CHM and I had yesterday. Walt decided to stay home. He's not big on car trips. CHM and I drove down to an area called La Brenne, an hour south of Saint-Aignan, and met up with Susan and Simon of Days on the Claise for lunch at a place called L'Auberge de la Gabrière. 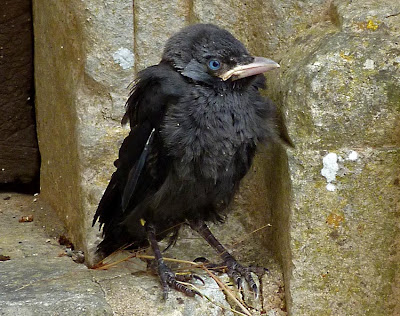 A little jackdaw sitting on the steps of the church
at Mézières-en-Brenne
La Brenne is an area of small lakes and lots of wildlife. The little lakes are called étangs in French, and there are 1300 of them. Some are more or less natural, and some are completely man-made. The largest étang in the Brenne is L'Etang de la Mer Rouge, at 160 hectares (400 acres or .6 square miles). The Brenne is the site of a 550 sq. mi. Parc Naturel Régional, so birds and other animals are protected there. The environment is made up of infertile prairie, wetlands, marshes, and heath. 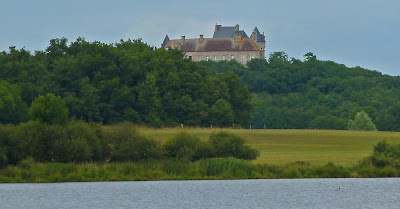 Le Château du Bouchet on a hill overlooking the water
The restaurant is on the shores of the Etang [ay-TÃ] de la Gabrière. After lunch, we drove down to a place called Le Bouchet, where there's a nature center and an old château, and then on to the Etang de la Mer Rouge, where we walked along a levee that holds back water to form the shallow lake. The lord of Le Bouchet, who owned the château and artificial lake, had been to the Holy Land on a crusade and held prisoner for a while near the Red Sea. 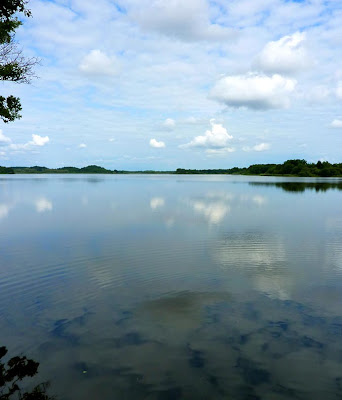 L'Etang de la Mer Rouge, dans la Brenne
We saw a lot of birds, including a couple of kinds of herons, some egrets, grebes, and other waterfowl. We saw frogs and turtles (terrapins). We saw some kind of muskrat or other aquatic mammal swimming along the shore. And luckily for us, we ran into and talked to a young man and his grandmother who had a telescope on a tripod to get close-up looks at different birds and other animals. We chatted with them for a while and they let us look through the telescope too. 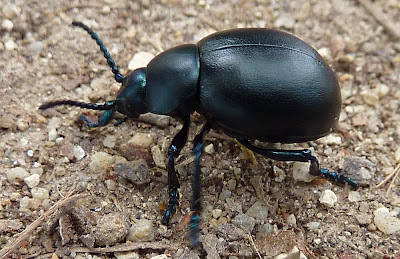 There's insect and plant life, too, in the Brenne
I'm not a naturalist or birder at all, but it was fun to see the wildlife and take some pictures with my little travel camera. It does a good job, as I've said, and with Photoshop I can sharpen, saturate, and crop the photos to make them even better. Some of the ones I took yesterday are posted here. 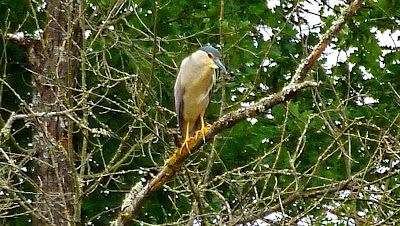 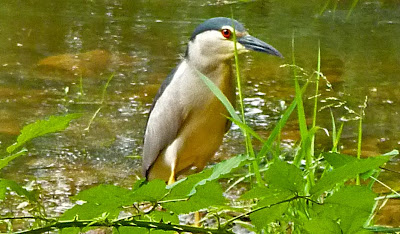 A night heron, first sitting on a branch of a dead tree
and then watching me from the shore
Oh, and lunch. CHM had a rabbit terrine with prune compote as his starter course, and I had a salad with duck gizzards and a raspberry vinaigrette. We both had a bavette d'aloyau steak with stewed shallots as our main course. The steak came with mushrooms in a cream sauce and a little broccoli soufflé. It was delicious.

There was a huge cheese cart — Susan took a picture of it and might post it on Days on the Claise. CHM and I both had a selection of goat cheeses: Sainte-Maure, Valençay, and Pouligny-Saint-Pierre, all more or less local. The wine we drank was a rosé from the Châteaumeillant vineyards, which are located just to the southeast of the nearby town of Châteauroux. 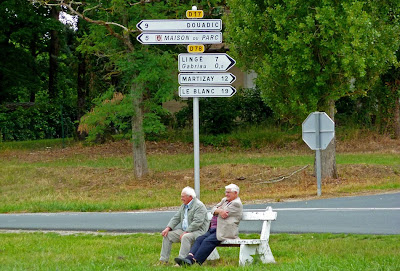 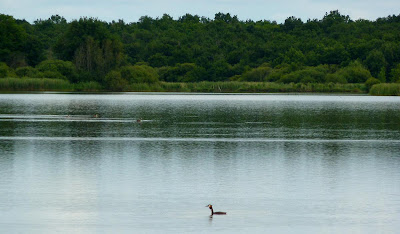 Two old guys (like me) sitting on a bench and taking in
the views of the Etang de la Gabrière
There was an adventure with CHM's Visa card too. The young woman who waited us on at the restaurant took one look at it and pronounced her judgment: it won't work in my machine. These cards sans chip never do.

She swiped it through anyway, and said: « Vous voyez ! Ça n'a pas marché ! » Just then, the little paper receipt started coming up out of the card reader. Wow! That's the first time such a card has ever worked, she exclaimed. CHM had to explain to her the necessity of a signature — she didn't have a clue.
Posted by ckb at 21:57