A week ago today CHM and I drove through the town of Soissons (pop. 28,500), visited the ruins of a big old church, had lunch, and then walked around in the cathedral for a few minutes taking pictures. The town was strangely quiet and deserted, especially — in hindsight — compared to the crowds of pedestrians and the traffic jams we ran into later in Reims (pop. 180,000), Troyes (61,000), and Sens (26,000).

I like to give population figures because they convey an idea of scale. Reims is a major city in France (like Tours), Troyes a small city (like Blois), and Sens and Soissons are even smaller cities (like Romorantin or Châteauroux). And I give the populations also for comparison with U.S. cities. Have you ever heard of Sunnyvale, California? Walt and I used to live there. Its population is 140,000 and it sits in the middle of a metropolitan area where more than 7 million people live. That's a world away from where we are now, in so many ways. 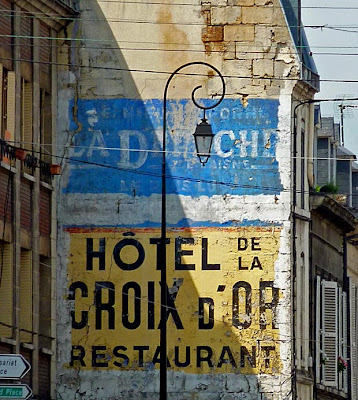 Street scene in Soissons
Passons. Soissons is an historic old town that existed long before the Romans arrived in Gaul 2,000 years ago. It was a kind of capital city for the « belgo-gaulois » people who lived in the region to the north of the Seine River up into present-day Belgium, and who held sway back then over the island called Great Britain. Julius Caesar described Soissons as a town that was "sprawling and prosperous." 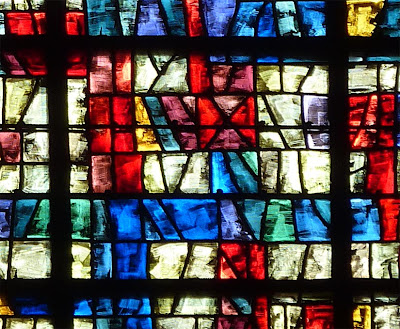 New stained glass in Soissons cathedral
In about the year 500, after the Roman Empire started falling apart, Soissons was conquered by the Frankish king Clovis, who made it his capital or, at least, his main encampment. Several Frankish — French — kings were crowned there over the centuries, and the city was very prosperous in the 12th and 13th centuries. In the 16th century it was besieged and seized by the Protestants. Finally, it lost out to nearby Laon as the chief administrative city of its département at the time of the French Revolution, more than two centuries ago. 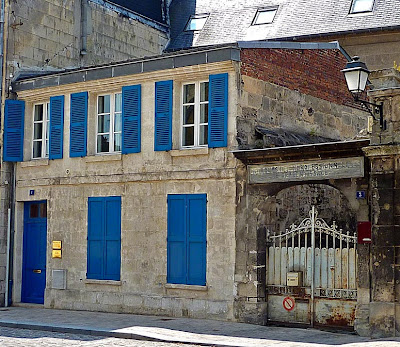 Across from the cathedral
In the 1870s, Soissons was shelled by enemy forces during the Franco-Prussian War. Shortly thereafter, the old walls of the town were torn down and replaced by wide boulevards, as happened in most French cities. Finally, Soissons was heavily damaged during the 1914-18 war by the invading Germans. The city was in the middle of major battle zones and changed hands several times over the course of the war. It suffered major destruction again during the 1940-1945 war. 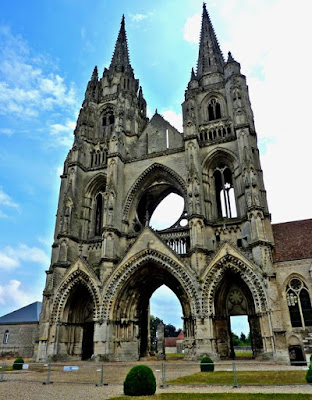 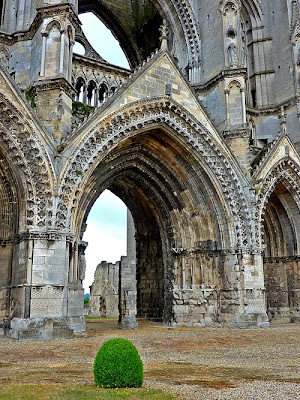 The ruins of the Saint-Jean-des-Vignes abbey church
One of the main landmarks in Soissons is the old abbey church called Saint-Jean-des-Vignes — or what remains of it, which is just enough to be impressive. The monastery was founded in 1076. Several churches were built in succession, including the one that lies in ruins today. The monastery was disbanded during the French Revolution, and the church was gradually torn down. The stone it was built of was used to build houses in Soissons. Like Jumièges in Normandy, the old building was used as a kind of quarry for decades or generations. 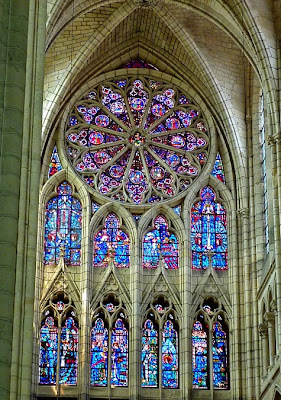 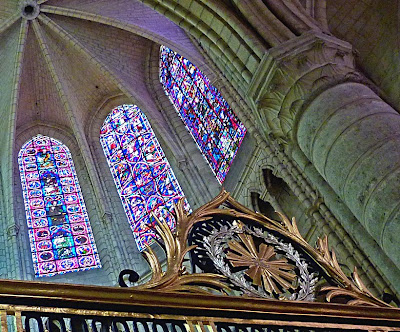 Two examples of stained glass windows in Soissons cathedral
After much degradation and abuse during the Revolution and again under Napolean, when it was used as an ammunition dump, the cathedral in Soissons, as in so many other northern French towns and cities, was nearly completely destroyed during the First World War. It has been rebuilt. Some of the stained glass windows are very old — 14th century — and beautiful. Others are modern, and beautiful in their own way. 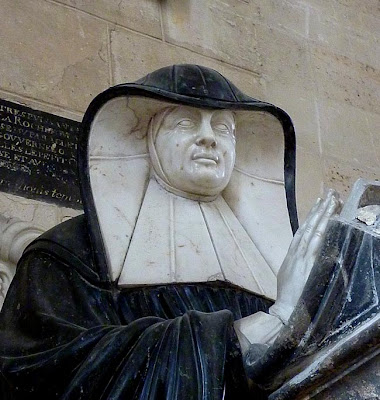 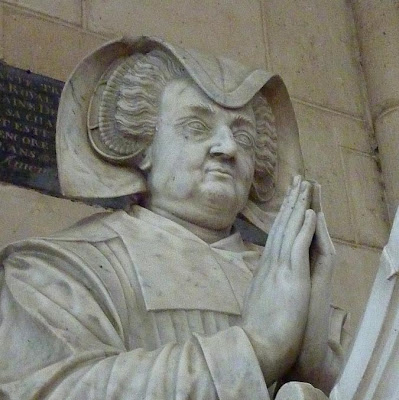 Statuary inside the cathedral at Soissons
What we did in Soissons last Sunday was drive around on the city's wide streets and boulevards, admire the ruins of the Saint-Jean-des-Vignes abbey church, and walk around in the cathedral. The weather was hot and turning muggy. There was thunder and lightning that night, and it rained heavily, off and on, the next day. But no, the drought — la sécheresse — is not yet over. There has been rain but not nearly enough to make up the deficit. 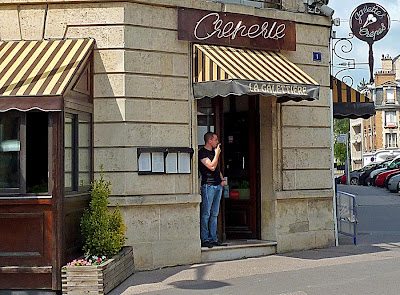 The crêperie by the cathedral and our waiter
having a cigarette in the doorway
We also had lunch. We didn't see many places open, but we drove past a crêperie near the cathedral and decided to have lunch there. We each had savory buckwheat crêpe, called a galette au sarrasin, filled with ham, cheese, an egg, and (for me) mushrooms. Then I had a dessert crêpe with coconut and CHM had some ice cream. 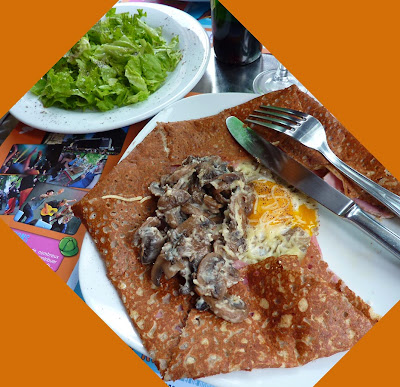 Une galette « complète » aux champignons et une salade verte
The food was good, and the waiter was funny, talkative, and efficient. I'll keep a good memory of Soissons, which I had never visited before.
Posted by Ken Broadhurst at 06:51