The fine wines of Chablis

Chablis, population 2600, is a village in the northern part of Burgundy where one of the finest French white wines is made. The village, located just a few kilometers east of the big town of Auxerre [oh-SEHR], is surrounded by vineyards growing up hillsides. I think everybody knows how to pronounce [shah-BLEE].

The Chablis vineyards cover 4870 hectares (nearly 50 sq. km) of prime Burgundy grape-growing land. That's 12,000 acres, or nearly 20 square miles. The vineyards were first planted more than 1000 years ago by monks who took shelter in Chablis after being chased out of the city of Tours by the Viking invasions of the 9th and 10th centuries. So there is a Touraine/Loire Valley connection. 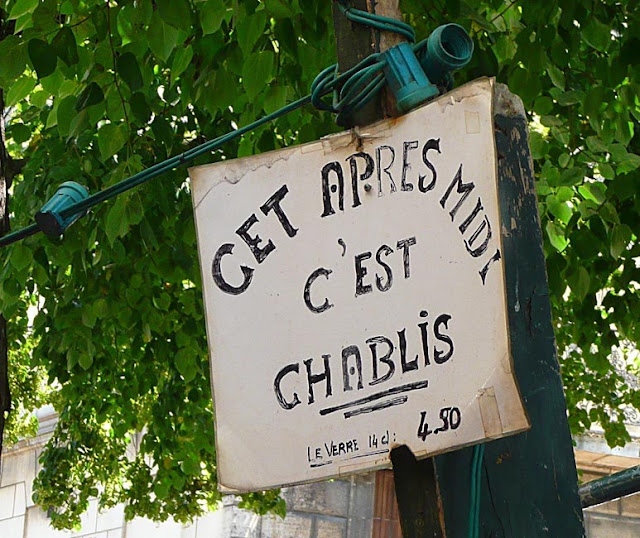 Chablis wines have a very long history, then. But the vineyard used to cover eight or nine times more land than it does now. Chablis supplied Paris with white wine because barges could carry barrels of it to the city, 160 kilometers away, on the Seine River. That was the situation until the construction of the first railroads in the 19th century made it possible to bring to Paris the less expensive wines of the South of France, or even Spanish wines. 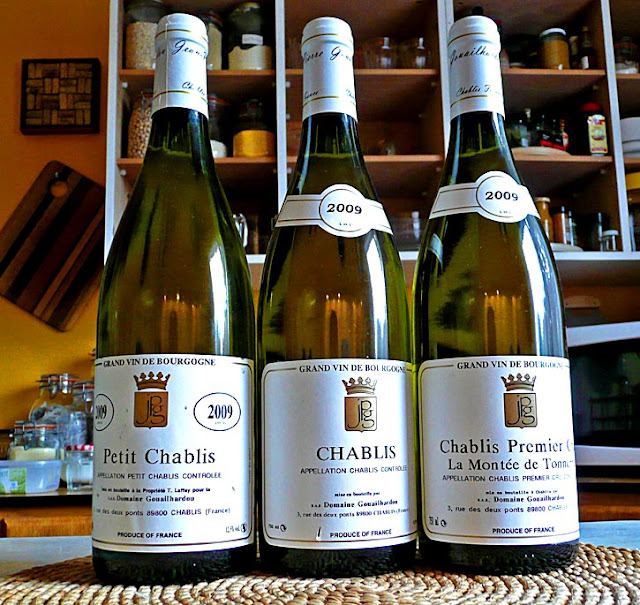 Three bottles of 2009 Chablis wine, which is made from
Chardonnay grapes in northern Burgundy

A vineyard so far north in France, like Chablis, is a high-risk enterprise, as wine expert Hugh Johnson points out in his Modern Encyclopedia of Wine (1983). Remember, Chablis is actually farther north than Quebec City, Minneapolis, or Seattle. The weather these days is iffy, at best, with some summers turning cold and damp. In spring, late frosts can — and often did, in the past — nip the grape crop in the bud. On top of all that, in the late 19th century the grapevine mite called phylloxera was accidentally imported into France from America and nearly killed the French wine industry altogether. Chablis suffered a triple whammy. 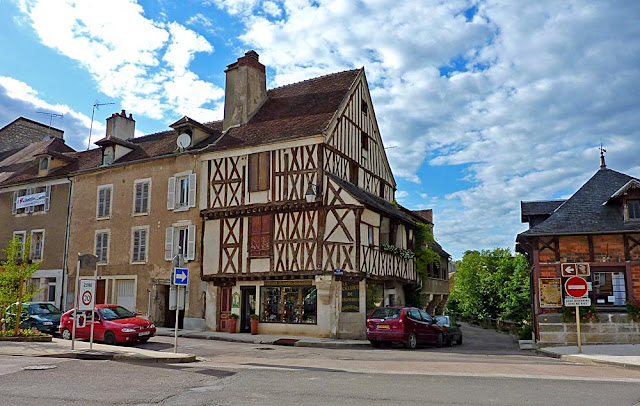 It wasn't until the 1960s that the Chablis vineyards fully recovered. Modern practices that limit damage to the vines caused by late springtime frosts have made grape-growing around Chablis practical and profitable again. First, smudge pots were used, and later growers put in sprinklers that can coat the new shoots on the vines with a thin layer of ice to protect them when temperatures go below freezing. If Chablis white wines hadn't been recognized as some of the finest produced in France (and beyond), the vineyard would probably have disappeared generations ago. 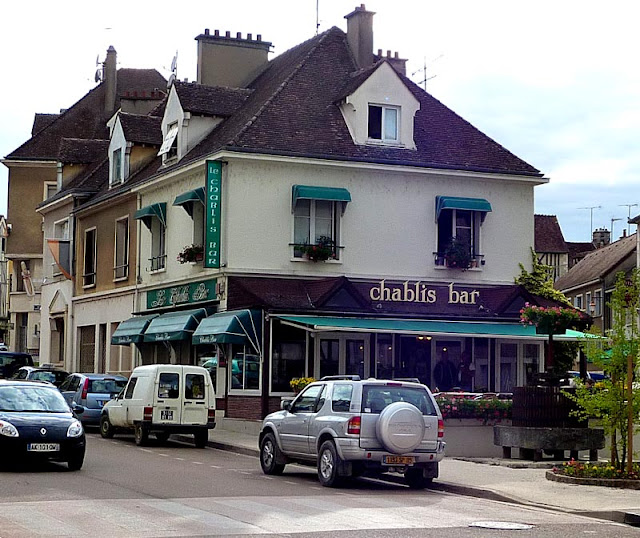 The wine industry in California did a lot in the 1960s and 1970s to sully the reputation of Chablis wines in America. In California back then, red wines were marketed under the name Burgundy or Mountain Burgundy, and white wines were marketed as Chablis. No matter that Chablis is a place, not a grape. Even in the 1980s, Hugh Johnson writes, the name Chablis was synonymous, in Calfiornia and elsewhere, with white wine — wherever it came from.

A lot of the time, that white wine called Chablis was pretty bad. So people got the idea that Chablis was low-quality wine. Nothing could be farther from the truth. Chablis is made exclusively with Chardonnay grapes. Saying that, given the controversies surrounding the oaky, buttery California style of Chardonnay that used to prevail, doesn't help the reputation of Chablis very much either, I admit. 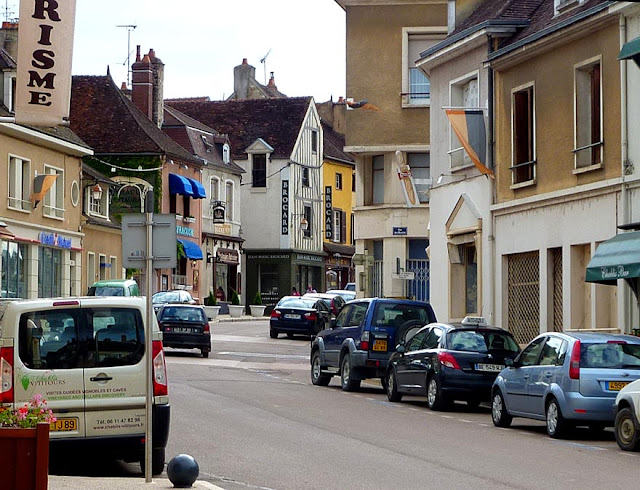 The main street in Chablis

Oak barrels used to be the only containers wine-makers had to store wine in. Nowadays, there are concrete, fiberglass, and stainless steel vats. While some Chablis vintners still prefer oak, many say oaking the wine changes — even denatures — its essential character. Chablis wine should be very dry and even flinty when young, according to many connoisseurs, like the Sancerre and Pouilly Fumé wines produced a little farther east using Sauvignon Blanc grapes and not aged in oak barrels. 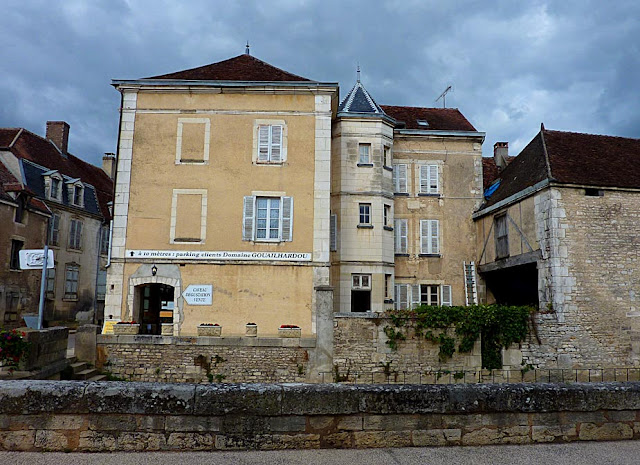 The fact is, Chablis develops fullness of flavor with age, even if it hasn't been aged in oak. Chablis Chardonnay comes in four styles: 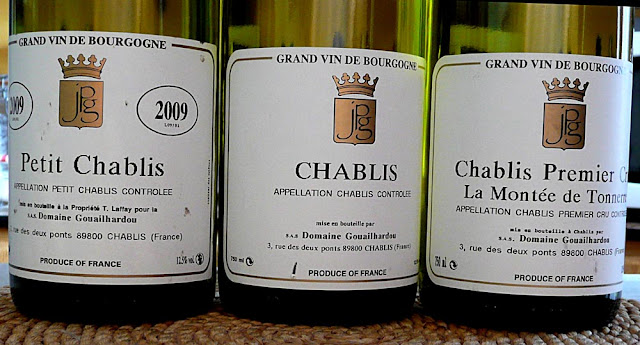 I bought two bottles each of Petit Chablis, Chablis, and Chablis Premier Cru for just over 50 euros from a grower/producer who has a shop in the village. I plan to keep the Premier Cru for a while, but we'll drink the others this year. I couldn't justify buying the expensive Grand Cru Chablis because we don't have a real wine cellar to store it in.
Posted by ckb at 09:08