The temperature in Saint-Aignan this morning, according to the little gadget I have on my Windows 7 desktop, is 2ºC. That's dangerously close to freezing. Our outside thermometer, however, reads 9ºC. On the radio early this morning, the weather report talked about frost on the ground in parts of Touraine.

Yesterday it was 97 or 98ºF in my home town on the coast of North Carolina. That's hot for May — or any time. Over here, by Sunday the average high temperature across northern France is supposed to be close to 30ºC — that's 86ºF. It's crazy. And still no rain. Maybe 1.5 mm day before yesterday in our rain gauge. That's hardly a trace. Walt is out watering the garden now, at 6:15 a.m. 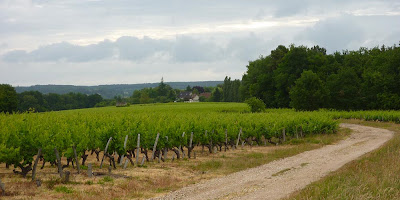 Touraine vineyards and our hamlet
Meanwhile, I think I might have been scammed. I'm not absolutely convinced, but there's that nagging doubt and fear in the back of my mind, keeping me awake at night. It all started last week when I got a call from the British company that handles our currency operations, taking the dollars we have sent to them and forwarding the money on to our bank in France in euros.

The representative on the phone said he had a special offer on homeowner's and automobile insurance to talk to me about. He asked if he could have a representative of the insurance company, which is in France, call me. I said yes, I could take a call the next morning. 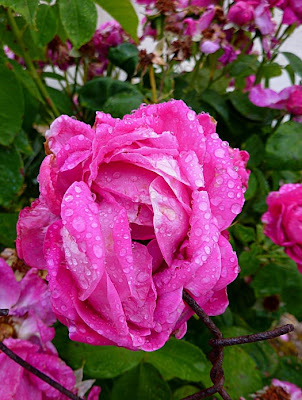 A neighbor's rose after a brief rain shower...


That call came in last Friday, and I had a long chat with a British guy who works for a French company that is actually a subsidiary of the bank where we have our accounts in France. At least that's who he said he was. He was calling from Normandy. He said he would work up a quote for our homeowner's insurance and send me all the necessary documents by e-mail.

I subsequently got his e-mail, read through all the papers he sent, called him back, and then filled out the forms and e-mailed them back to him. It was an attractive offer, and came with a 20% rebate for the first year because I am a customer of the currency-exchange firm in London. Did he have a deal for me, or what?

One form that I sent in was an authorization for the company to draft the annual insurance premium from one of our French bank accounts. After I sent him that authorization and a lot of other documents, the man called me again and said he had made a mistake in calculating the premium, which he said was going to end up costing me nearly twice as much as his initial quote. 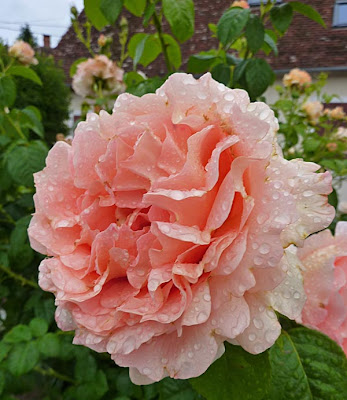 ...and another
Now I'm worried that the company will take money out of our account even though I decided not to go ahead with the policy. It's unlikely, since the insurance company is a subsidiary (supposedly) of our bank, and it's one of the largest banks in France. I'm getting ready to go off on a driving trip for a week, and I don't have time to deal with this. But now I feel like I need to drive over to my bank over in Montrichard and put a stop-payment on the authorization I sent out. It's all a big pain.

And it's my fault. I know better than to try to business with British companies operating in France. They are just not up to snuff when it comes to French regulations, laws, and business practices. And any time you add an international element to any financial transaction, you are asking for trouble. And that's with a capital T.

This is a British outfit that targets British expats in France who don't necessarily speak much French and who need services and information in English. That's not my case, but I fell for it anyway. 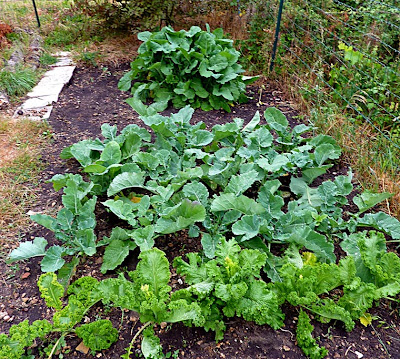 My greens after a generous watering — not by Mother Nature, but thanks to the garden hose
The insurance company representative said he had initially misunderstood the legal details regarding how we own the house — we are incorporated and our corporation owns it. In other words, we own the corporation, which in turn owns the house. When he realized that, he jacked up the premium. And that happened despite the fact that I explained everything to him during our first phone conversation. He just wasn't listening. As Walt says, he was too busy trying to sell me something...

I hope I'm worrying myself silly over nothing. But I guess I now need to do something to protect myself against fraudulent withdrawals of funds from my bank account by this so-called insurer.
Posted by Ken Broadhurst at 06:59