A special variety of beans has been cultivated in the Soissons area since the middle of the 18th century. At the beginning, the beans were planted among grapevines wherever there was a little extra space. Soissons ([swah-SÕ] — Õ is the French nasal O) is in northeastern France, 100 km/60 miles northeast of Paris and 60 km/35 miles northwest of Reims in Champagne. They don't really grow many grapes up there any more.

Soissons beans are a kind of giant white lima bean. They resemble the beans called « pois du cap » — "Capetown peas" — that are sometimes available in France. The Soissons beans I found up in Picardy seem to be about the same size as pois du cap but are fatter and not as flat. I don't know if you've ever cooked and eaten giant white lima beans, but I know we ate them when I was growing up. They're nutritious, filling, and tasty. 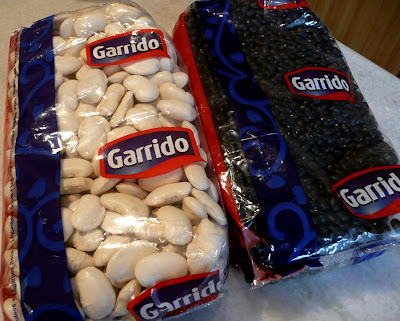 Bags of haricots de Soissons and haricots noirs
I've also been buying and cooking giant white limas in France for a few years now — here are three posts I've done featuring them (one, two, and three) I use them in the place of smaller white beans (haricots blancs, lingots) in Southwestern France's cassoulet and with Touraine's version of pita bread called fouées.

While I can buy giant lima beans here (in Blois, actually) I had never seen haricots de Soissons in the supermarkets or on the open-air markets in Touraine. They're a regional specialty, I guess. But about two weeks ago I was in the town of Soissons with CHM. Here's a link to the post. That made me think of the Soissons beans again.

Giant white beans named after the French town of Soissons
A couple of days later, I found them just by accident in an Auchan supermarket in the town of Péronne, about 50 miles north of Soissons. I was just looking around to see if there were any local specialty products to be had, and I found not only a bag of dried haricots de Soissons but a bag of dried black beans. I'd never found black beans here in the French countryside before.

It seems that since 2003 a group of farmers around Soissons (in the Aisne département) has started growing these giant white beans again. Never mind that the ones I bought came from a distributor in Spain! This is the new Europe. It doesn't say on the package where the beans were grown. Maybe in Spain, maybe France, or maybe even in America. Some of the dried beans I get here come from Portugal, but on the label it says they are grown in the USA. 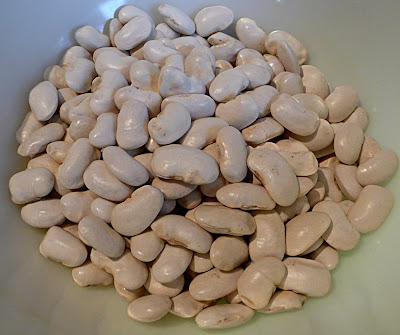 Soissons beans need to be soaked for 12 hours
in cold water before being cooked.
The Soissons bean was a major source of dietary starch for generations in northern France. It lost some of its popularity when the potato gained acceptance as a food in France in the 19th century. Like white, green, red, pinto, and black beans, the Soissons bean plant originally came from South America. I'm going to cook some for tomorrow's lunch and have them with rabbit, duck, and chicken sausages that we can buy at the Saturday morning market in Saint-Aignan.
Posted by Ken Broadhurst at 07:27