In a small village five miles east of the town of Châlons-en-Champagne, on the route de Verdun, stands the church called Notre-Dame de l'Epine. Seeing such an enormous flamboyant gothic structure in a tiny village, population 650, comes as a surprise. 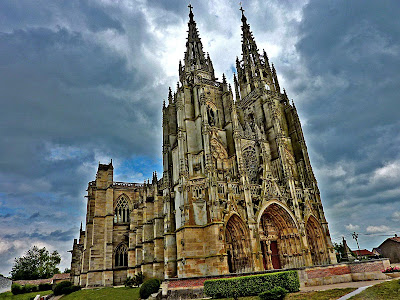 Notre-Dame de l'Epine in Champagne
Click the image to enlarge it, and then click again to see it at full size.
The story, or legend, is this: in the 1300s, some shepherds in the area saw a thorny bush burning in a field. They approached it and found inside a statue of the Virgin Mary holding the Christ child. It was a miracle. A church had to be built on the site. 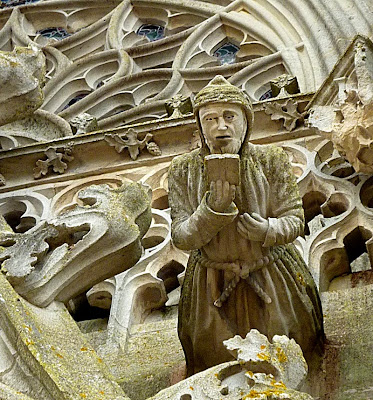 The church is known for its gargoyles, many of which
were restored (sometimes "abusively") in the 1800s.
Construction started in 1405 and the work continued until about 1525. The church was dedicated to the Virgin Mary and therefore called Notre-Dame de l'Epine — L'Epine ("The Thorn") also being the name of the village where it stands. 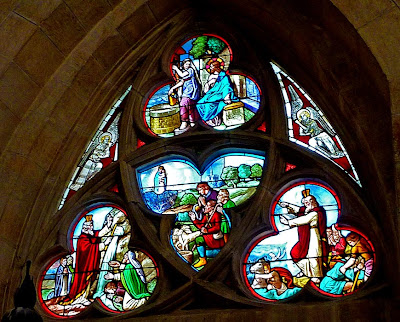 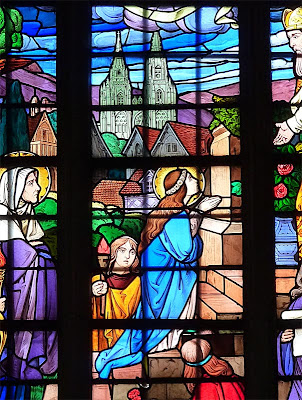 Some of the stained glass inside Notre-Dame de l'Epine looks
almost cartoonish. I don't know how old the windows are.
In 1914, the church in L'Epine was granted the status of "basilica" by Rome, meaning it is a church of special historical significance.
Posted by Ken Broadhurst at 07:04