I have a cactus in a planter box. Several of them, actually. I leave them outside all winter, and they don't seem to mind much. Right now they are flowering. CHM brought them to me in the form of cuttings off a plant he has in his garden the United States. 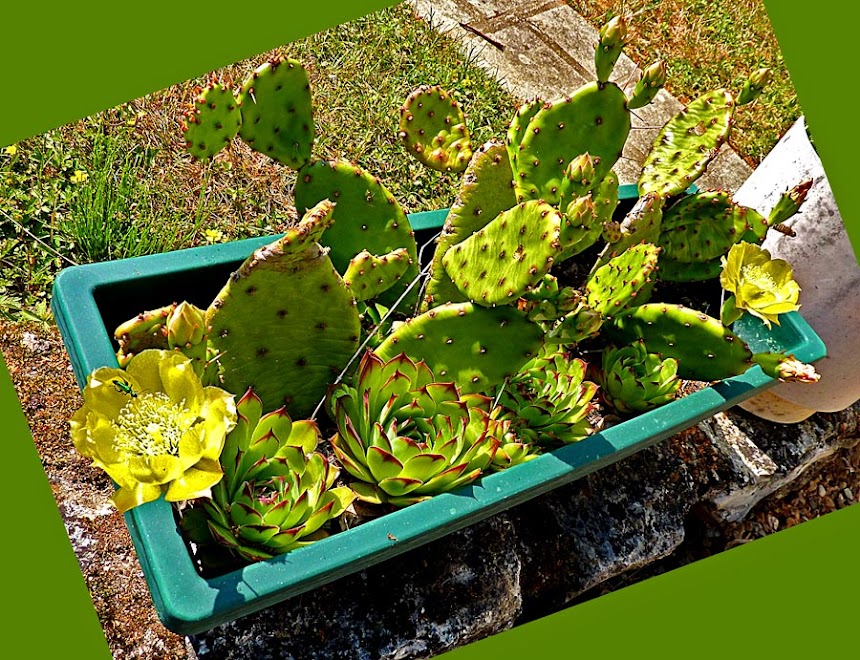 Opuntia robusta or humifusa ?
In the planter with the cactus are some little joubarbes des toits — variously known as "hens and chicks" or "houseleeks" I believe. The genus is Sempervivum. I read in the Larousse Gastronomique that some varieties of joubarbes are edible. You trim and cook them like artichokes. I've heard local people here call them petits artichauts. One day I'll have to try them. 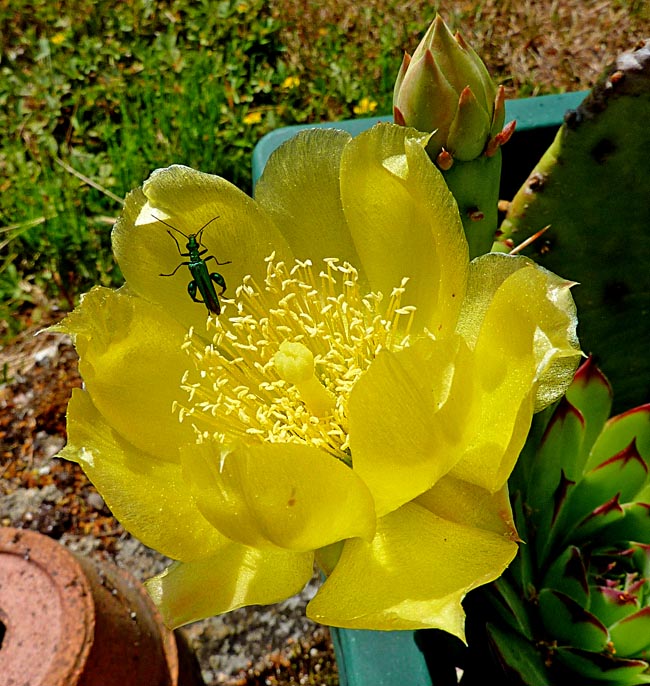 A prickly pear flower
The cactus pads are also edible, of course. I've never tried cooking them either. This particular cactus, which is a prickly pear, looks like Opuntia robusta, which is native to Mexico and has been naturalized in parts of Australia, where it is seen as a "noxious weed." The flowers produce the cactus fruit, which is edible. The fruits have to be peeled or scraped very carefully to remove all their tiny spines and needles before you eat them. 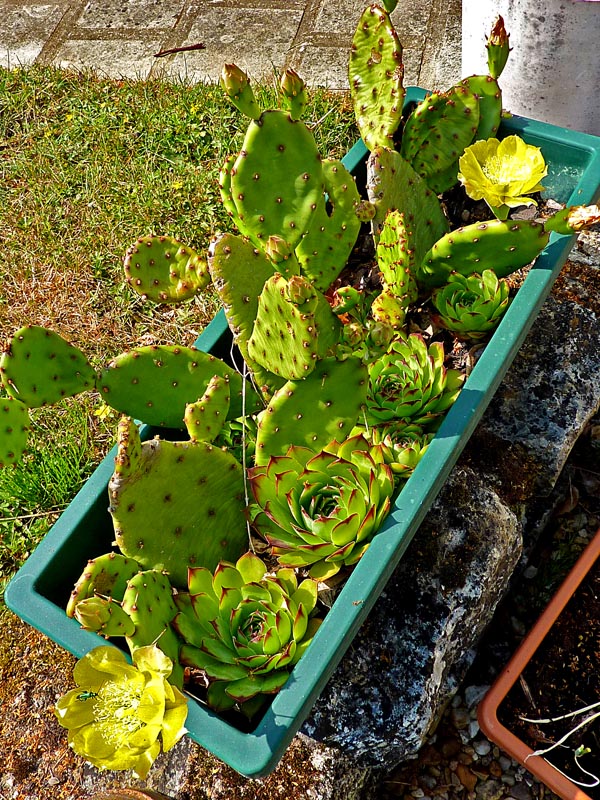 Opuntia variety and Sempervivum tectorum
I like growing the cactus but it's hard to work with of course. If you want to transplant it, you have to be very careful or you'll end up with a lot of little spines sticking into your hands. Cactus pads or leaves are called « articles » in French, and the Opuntia pads are « articles plats en forme de raquettes » that are called « cladodes ». Some people call the Opuntia plant « un cactus-raquettes ». The fruits or "pears" are called « figues de Barbarie » in French. 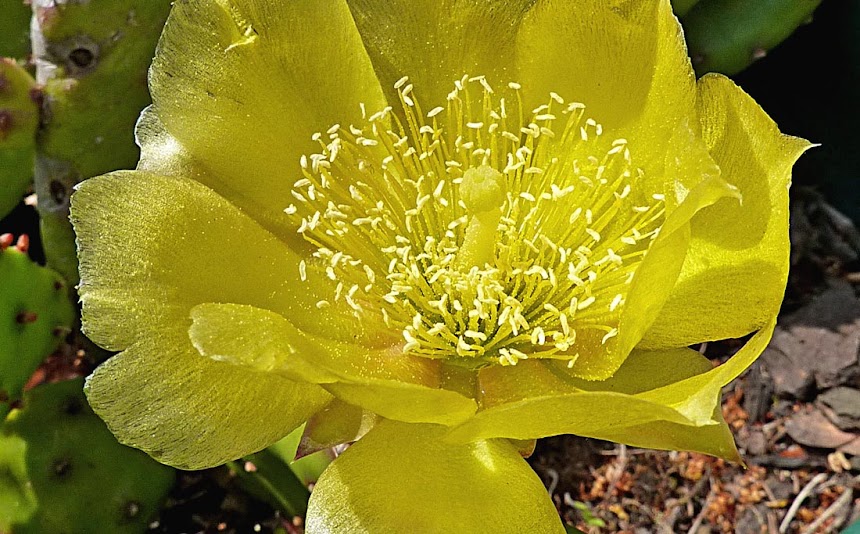 Another Opuntia blossom
Some people might be surprised to know that cactus plants grow on the sand dunes and sandy shorelines of the North Carolina coast (where I was born and grew up). I assume they are native plants, because they've always been there as far as I or my mother can remember. It's quite a surprise to step on one when you are barefoot at the beach. They, along with sand spurs, are a good reason always to wear sandals or flip-flops around there. 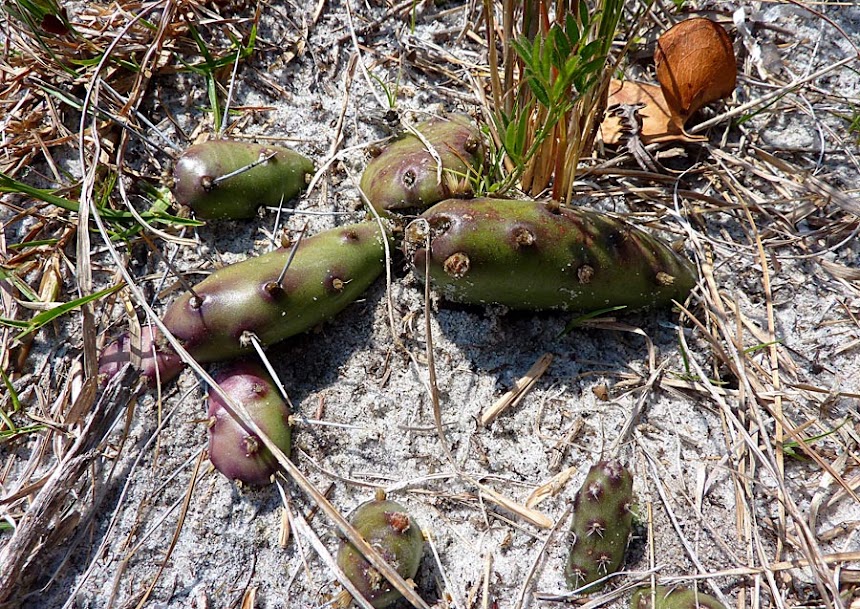 The "pear pad" or Dune Prickly Pear of North Carolina
We called them "pear pads" when I was growing up, and they also are a species of prickly pear — in other words, an Opuntia. They thrive in high temperatures and sandy, well-drained soil. I took pictures of some (above) growing along a sandy shore when I was on Harkers Island in North Carolina in March. According to this Duke University web page, they are called Opuntia pusilla, or the Dune Prickly Pear.

And this morning, I found this other web page on that Duke University site. Evidently, there is a prickly-pear cactus native to the North Carolina coastal plain called Opuntia humifusa. It probably grows in other states, including Virginia. In the pictures, it sure looks a lot like the cactus plants I'm growing.
Posted by ckb at 08:06