The only translation I can come up with for « tomates confites » is "slow-roasted tomatoes." The whole concept described by the terms « confiture, confit, confire » seems to be central to French cooking and hard to translate into English.

The adjective confit can apply to fruits that are candied or stewed in sugar and their own juices. A French word we all learn early on is confiture, which means jam or preserves made with fresh fruit. The verb is confire, which derives from the Latin conficere, meaning "to prepare." Foods that are confits are prepared in a way that preserves them over a long period of time. You can confire meats and vegetables as well as fruit. 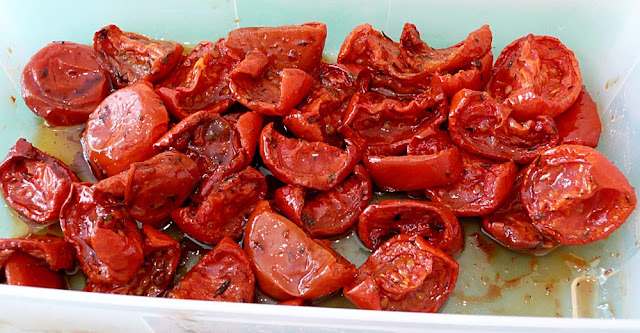 The key to it all is slow cooking, but there are many techniques. Fruits are confits in sugar and their own juices by slow-cooking to make confiture. Fruits confits are cooked in a heavy syrup until they turn into what we might call "candy" — or "candied fruit." Fruits and vegetables can also be confits in vinegar or alcohol.

Meats like duck, goose, or even pork are confits in their own fat, again by slow cooking at low temperatures. Covered in that fat and kept in a cool dark place like a cellar, the meat can keep for an extended period of time because it is protected from contact with the air. 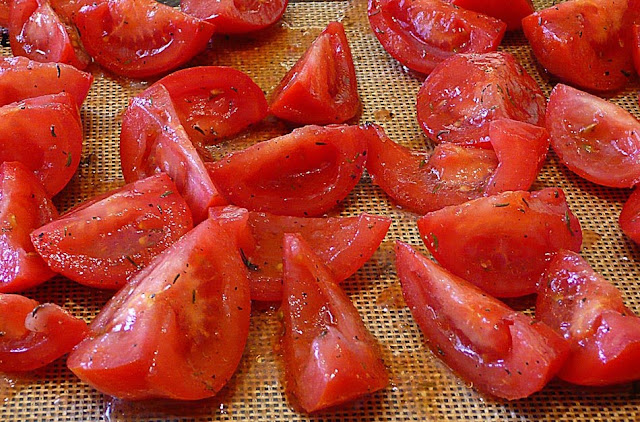 Anyway, tomates confites are something I made a few days ago (and have made and blogged about before). The impetus came from Susan at Days on the Claise. When she and Simon visited a week or two ago, she brought us some tomatoes that she had slow-roasted in the oven. She said she bought the tomatoes at the supermarket.

It's a good idea. You buy inexpensive tomatoes that might not have that full garden-fresh, vine-ripened flavor you'd like. But you concentrate their flavor by roasting them slowly in the oven until they start to melt down and stew in their own juices. They are vastly improved by being confites.

I bought a kilo of tomatoes from Spain, where they were almost surely grown in hot houses, at a pretty low price. To prepare them for slow roasting, first you cut them into wedges or halves (depending on size) and toss them in some olive oil with salt, pepper, and a pinch of sugar. You can add some dried herbs — thyme, for example — or some minced or sliced garlic. 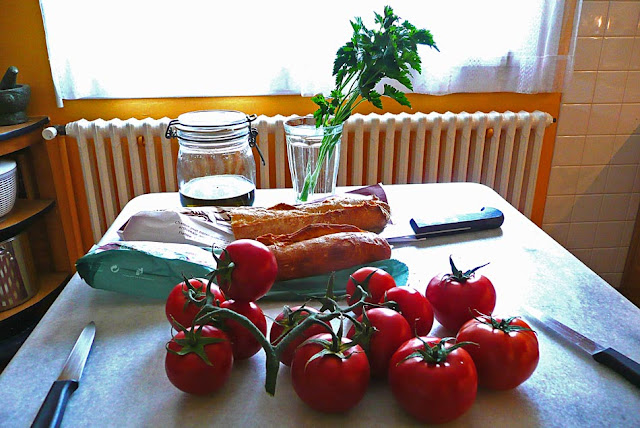 Inexpensive tomatoes from the supermarket

Then spread the tomatoes out on a baking sheet or pan so that they aren't touching each other. Put them in a "slow" oven — at 200ºF/95ºC. Cooking times and temperatures are approximate. If they tomatoes look like they're cooking too fast, turn down the heat. Leave them in the oven until they look the way you want them to look. They should start to shrivel but not dry out. They should start to collapse, but they shouldn't release a lot of liquid.

You'll be surprised how good they are. They'll keep in the refrigerator for several days, if they last that long. Eat them in salads, or as a pasta "sauce." They are confites, which in this context means almost "candied." Slow-cooking concentrates their natural sugars and gives them a nice texture.
Posted by Ken Broadhurst at 08:18