Rillettes are shredded lean meat packed in pots with some fat and broth to bind the mixture together. They are normally eaten cold, either mounded or spread on toasted bread and accompanied by the sharp flavor of the sour French gherkins called cornichons — or with salty olives. In cafés in Paris and around France, you can usually also get a rillettes sandwich, which is a small portion of the potted meat spread on a split baguette. 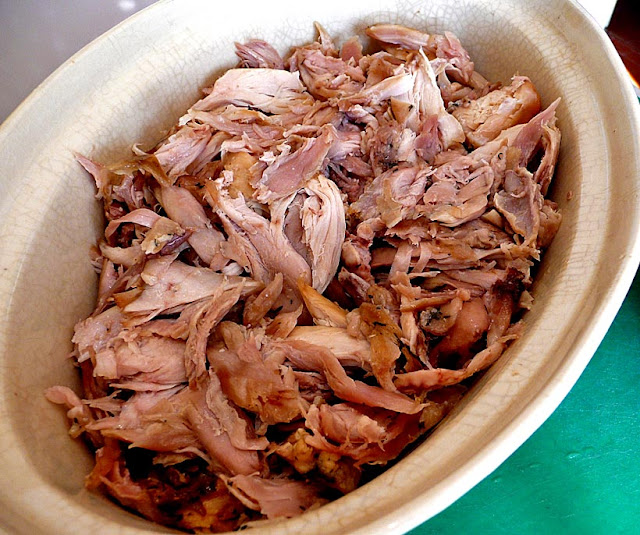 Shredded rabbit meat after its slow cooking in duck fat 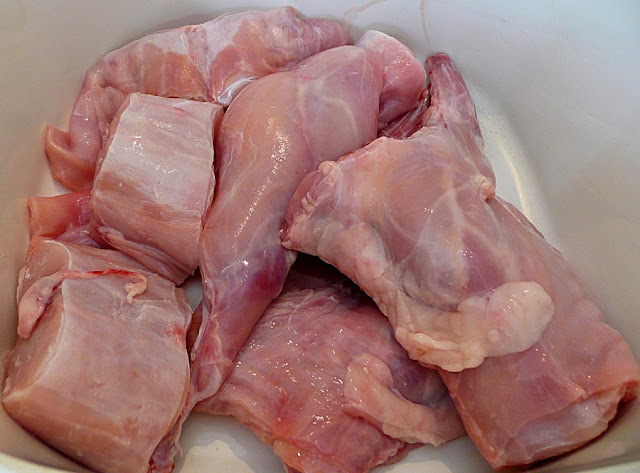 Nice pieces of rabbit, which is a lean, white meat
and not gamy at all


According to the Robert dictionary of the French language, the term rillettes dates back in writing only to 1835, when the novelist Balzac, who lived and worked in the Loire Valley, used it in a published work. Of course the term or similar ones already existed in the spoken language, at least regionally. But Balzac officially made it a French word, and the rest is history. The Collins-Robert French-English dictionary gives one translation — the not-very-appetizing term "potted meat" — but also says French rillettes are also just called "rillettes" in English.


It's pronounced [ree-YET] in French, and maybe [ree-YETS] in English. It's a plural, and I don't think there's any such thing as a single rillette. Nowadays, rillettes are made of many different meats, including duck, goose, rabbit, or even chicken or turkey, or of fish, including tuna, salmon, or mackerel. For meat rillettes, the fat the meat is cooked in is usually lard when pork is involved, or goose or duck fat when other meats are used. The fat used in fish rillettes is either mayonnaise, softened butter, fromage frais (which is like smooth cottage cheese), or softened cream cheese. 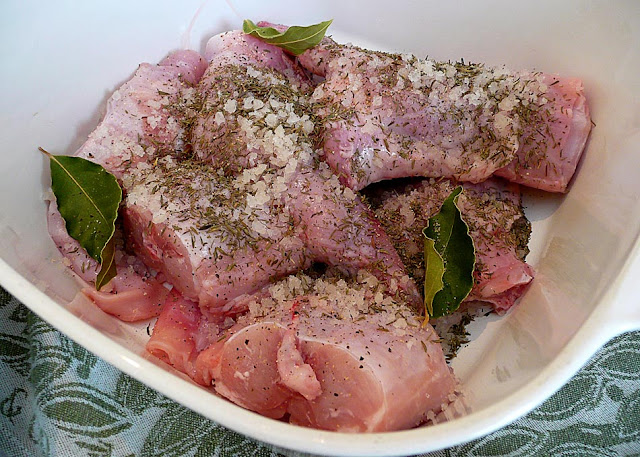 For the past few days, I've been making rabbit rillettes. My batch is in the oven as I type this, warming up so that I can incorporate some of the duck fat that I cooked pieces of rabbit in yesterday and the day before. I'll also add some of the broth the rabbit produced as it cooked; it will be full of gelatin because the rabbit cooked on the bone. After I mix the shredded meat, fat, and broth together, it will go into the refrigerator to cool and set up.


There won't be any pork in my rabbit rillettes, though I think you could add some. And you could add some lard to the fat, but I'd rather just make rillettes with duck fat. Duck fat, by the way, can keep indefinitely in sealed jars in the refrigerator or a cold cellar. After you use it, you melt the rest and as it cools and solidifies the jars seal again and can go back into storage. Duck fat is a healthy fat, and the people who eat a lot of it down in southwestern France have low rates of coronary disease. 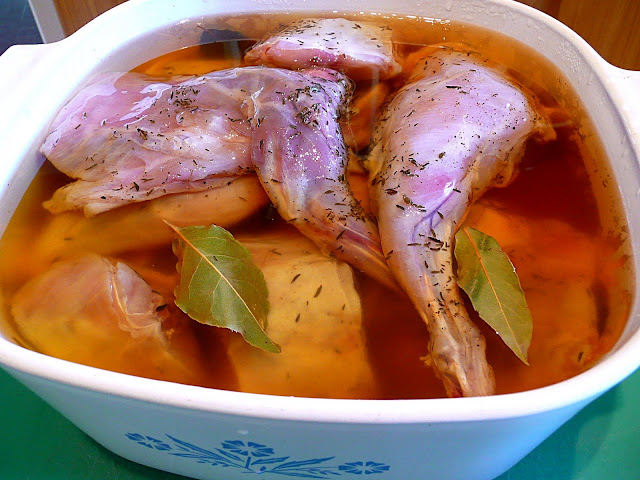 Rinse the marinated rabbit pieces and cook them slowly
for several hours in enough duck or goose fat to cover.
This makes rabbit confit — like duck confit.


But the most important thing about rillettes is that they are delicious. The meat itself is marinated in salt, pepper, and herbs before being cooked slowly in fat. The fat tenderizes the meat, and you let it cook at low temperature until it starts to fall apart. After it's cooked in fat, I like to take the pieces and put them on a rack in a low oven (say 200ºF/100ºC) and let them drip and dry. The outside of each piece of rabbit, duck, or pork, for example, will brown lightly. That adds flavor to the shredded meat.


After you take the meat out of the oven and let it cool, you have to shred it, leaving some nice chunks when you can. If you cook boneless pork, you can just mash it with a fork. If you use rabbit duck, or goose, you need to take the meat off the bones and make sure no little bones go into the mixture. It takes time, but it's not hard to do. When you mix the fat and broth into the shredded meat, you can also add either fresh or dried herbs for even more flavor. 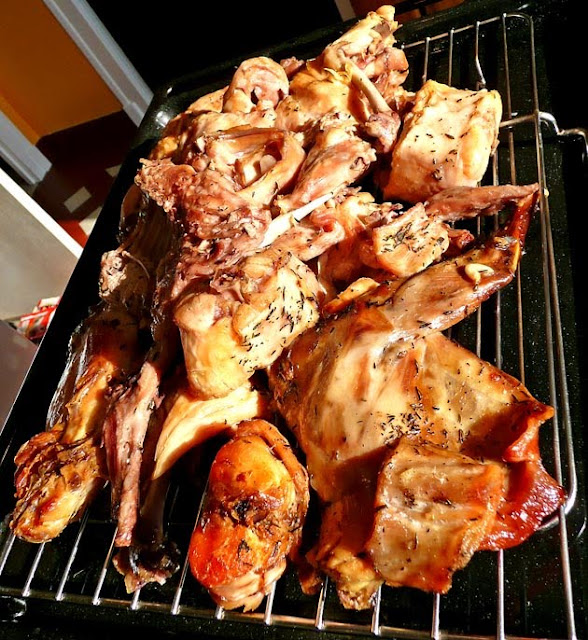 The cooked rabbit pieces after they have dried
and browned slightly in a low oven, ready to shred


You can pack the finished rillettes into small pots — that's why the English term is "potted meat" (it's not because alcohol is involved!) — or you can pack them into a larger dish and then cut slices or even wedges. At the markets, you often see rillettes in large heavy bowls, and the charcutier or charcutière either spoons some out or cuts a wedge, weighs it, and wraps it in butcher's paper. Sometimes you get a slice. I'm going to pack my rillettes in a big dish, cut slices, wrap them, and put at least some of them in the freezer.


For these rabbit rillettes, I bought two rabbits that each weighed 1.5 kg, or over three pounds. So I cooked somewhere between six and seven pounds of rabbit. That's a lot. The rillettes will keep fine in the freezer for two or three months. They will be good spread on toast rounds and served with cornichons or olives when we are sitting out in the back yard with friends this summer, having a glass of rosé wine. They will also be good as an ingredient or side dish with a big salad of lettuce, tomatoes, and cucumbers.


I realize that most of the people reading this blog won't have several quarts of duck fat in their fridge. I do, though — that's part of life in France. At least my life. I'd better get downstairs now and pack the rillettes into that big dish. It's a terrine, by the way...

Click this link for a follow-up post about rabbit rillettes, including a note about saltiness.
Posted by ckb at 08:00