An afternoon among the orchids

The native wild orchids are in bloom at different places around the vineyard. They seem to have bloomed earlier than usual, which I guess is because our weather has been so mild for a month or more now. 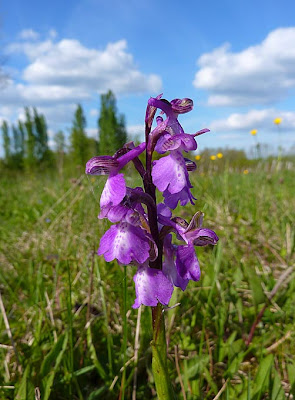 The local wild ground orchids known as « pentecôtes »
or Orchis bouffon — "clown orchids"
Until this morning, actually. It's chilly outside. On the news, they are saying people shouldn't forget to pull on une petite laine — a sweater — if they are going out. The sun is shining brightly, but yesterday, for the first time we can remember, the vineyard owner set out a large number of bougies anti-gel — little smoke pots to prevent the tender new leaves on the vines from freezing. 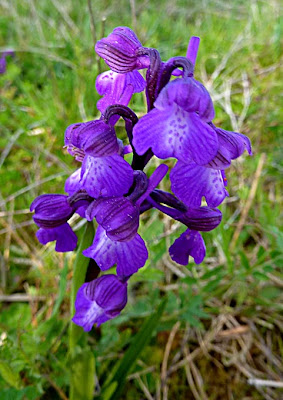 Green-winged orchids growing around the vineyard
Yesterday afternoon it was a different story. I had told Susan and Simon that the orchids were in full bloom so they came up to Saint-Aignan to take photographs. We walked out into the vineyard at about five o'clock with Callie — it was the dog's regular afternoon stroll. The weather was very pleasant, as you can see. 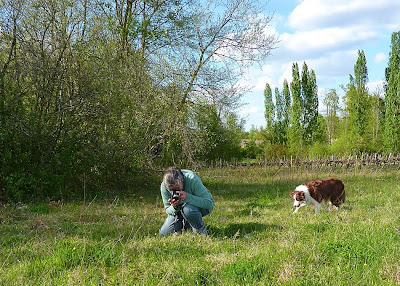 Susan taking pictures and Callie sneaking up on her
All the purple flower stalks we were seeing, according to Susan, were on little "green-winged orchids" that are one of several orchid species called « pentecôtes » locally — they bloom around the Pentecostal holiday (Whit Sunday or Whitsun in England). The wild orchids are early on two counts this year — early in April, and much earlier than the actual Pentecôte, which because Easter is so late doesn't fall until nearly mid-June. 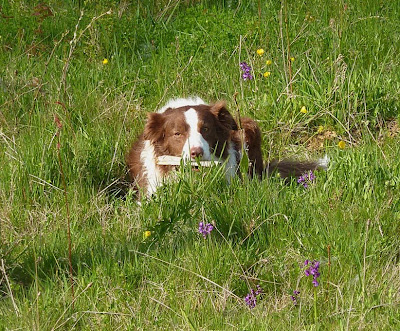 Callie with her toy among the wild orchids
Callie enjoyed the walk and the flower photography, especially when Susan was down at ground level with her camera. The dog was very curious about that kind of play. When she realized that her human companions were not in a big hurry, she entertained herself by finding sticks to play with. Simon joined in the game at different points.

It was a very pleasant little excursion, with bright sun and just a little northerly breeze. No need for a jacket, actually. In the picture of Callie above, you can get an idea of the size of the wild orchids we were admiring.
Posted by ckb at 08:08