The Canal de Berry runs more or less parallel to the Cher River for about 300 km/200 mi., from the town of Montluçon in the Allier department (Auvergne region), southeast of Saint-Aignan, through the city of Bourges, past the towns of Vierzon and Selles-sur-Cher, and ending at Noyers-sur-Cher, just across the river from here. It was built between 1808 and 1840, and it was in service until 1945.

We've been living here for eight years, and we've walked along the canal at various points — Noyers, Selles, Vierzon, and the medieval fortified town called Mennetou-sur-Cher. I've posted about Mennetou many times on this blog (two series of posts, in February and April/May 2008). Here's a link to a post that shows the Canal de Berry there. 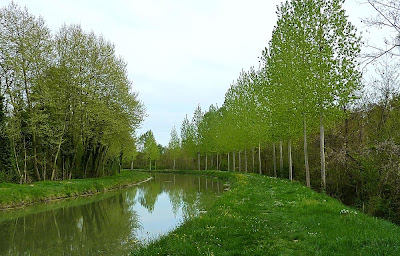 Recently, we've been exploring the area east of Saint-Aignan and on the opposite bank of the Cher, where the canal runs, between Noyers and Selles. We've bought wine in a hamlet called Les Martinières at a winery with a view out over the canal and the river. Many times we've driven over the bridges that cross over the canal and the Cher between Châtillon-sur-Cher on the north bank and Meusnes on the south bank of the river.

The Canal de Berry with the "canal-bridge" in the distance
That said, something I discovered purely by accident six or eight months ago was a feature called the Canal-Pont de Berry. I was buying wine — I seem to do that a lot — from a vignernon/neighbor in our village when another local vigneron stopped in. We were introduced because we had never really met before, although we had often seen each other from a distance many times when I was out walking the dog in the Renaudière vineyard and he was busy tending the vines he owns out there. 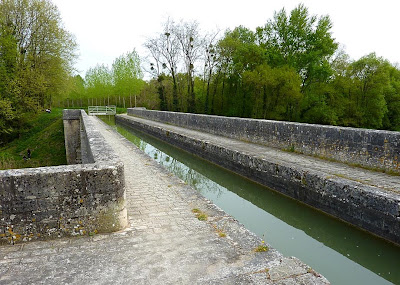 The canal crosses the Sauldre River on this bridge
"Thierry" — that's his name — "lives over on the other side of Châtillon-sur-Cher, where the canal crosses over a river on a bridge," our wine-producer/neighbor told me. "You know where that is, right?" I said yes, but I was mistaken. I thought he was talking about the place where the road crosses the canal over a little bridge. 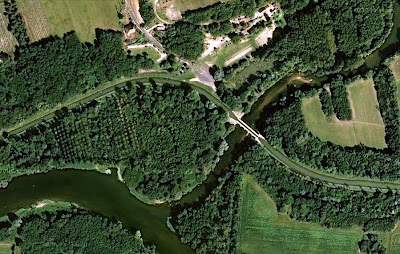 Here's Google's satellite view of the area, showing the Sauldre
flowing into the Cher just downstream from the canal bridge
But no, he really was saying that the canal itself crosses over the river on its own bridge. Back at home, I pulled up some Google maps and satellite views and found the spot. The canal, running parallel to the Cher, crosses over a tributary, the Sauldre River, on a bridge, just where it flows into the Cher between Selles and Châtillon. 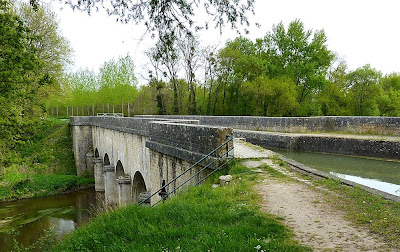 Le Pont-Canal de Berry
Several times last winter I thought about going over there to look around, but each time the day was rainy or snowy or just too cold and gray. And then yesterday, for the first time, I made an opportunity to go see the pont-canal. I had to drive over to Selles-sur-Cher in the afternoon, and it was only a short detour off the main road.

I took some pictures. It's amazing how you can live in a place for eight years and still not have discovered one of its most unusual landmarks. I guess the pont-canal would qualify as an aqueduct. It's one that works, with water flowing over it, even though the canal is not longer used by river traffic hauling freight.
Posted by ckb at 08:50