The ground all around is covered in little blue flowers — that is, in the places where it's not covered with little yellow flowers or little white flowers. I like the blue ones the best.

They are called « la véronique petit-chène » in French, it appears — "little-oak veronnica." That's Veronica chamaedrys in scientific terms and French Wikipedia says it's are a common perennial all across Europe, except near the Mediterranean. The plant can be used medically, but ingesting it can cause diarrhea. 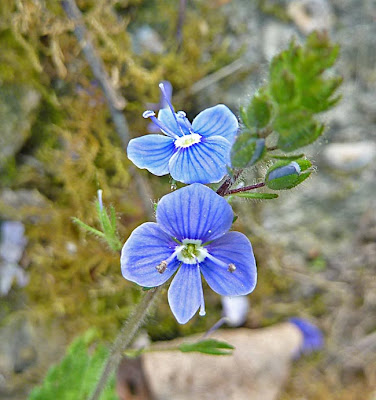 Little blue flowers
In English, it's called Germander Speedwell or Bird's-eye Speedwell. It forms wide carpets of blue flowers on the ground in many places around the vineyard.

The big news in France right now is how high gas prices have gone up and will go up. The head of the French oil company Total says it's inevitable that the price of unleaded gasoline — essence sans plomb — will soon go up to two euros a liter. That's the equivalent of about $11.00 — eleven U.S. dollars — per U.S. gallon. 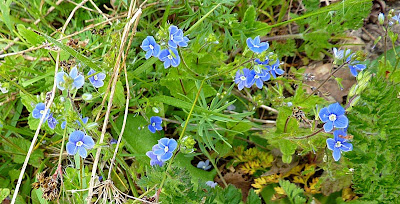 Veronica, called véronique petit-chêne in French
Well, I guess we all know that the price of gas can only go up, at least long-term. According to the news, one station in Paris has already put it's price for premium gasoline up to 1.89 € a liter. Diesel fuel — gazole or gasoil in French — is going for 1.37 € per liter right now, they say — that's about $7.50/gallon in U.S. terms. I will probably have to buy some this week. The last time we filled up the Peugeot was around March 10. 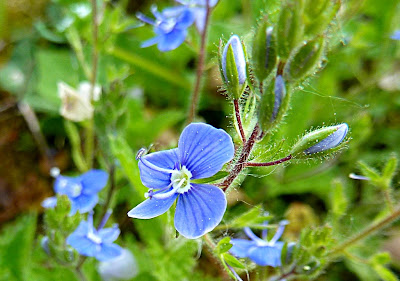 In English, this plant is called Speedwell. Wonder why?
The other news is how unusually warm and dry it is in France right now. Farmers are starting to talk about drought again. All the vegetation is far ahead of where it should be at this time of year. Still, local people around Saint-Aignan like to talk about the year — sometime in the 1980s, I think — when there was a significant snowfall around May 10.

I guess that's not going to happen, but we are planning to respect the timeless folk wisdom that says you shouldn't plant your vegetable garden until about May 15, just to be sure. Yesterday I tilled up two plots of ground for the 2011 garden.
Posted by ckb at 08:06