Those are some of the words that describe the taste and texture of the flesh of a géline de Touraine chicken. Walt ordered one from one of the poultry vendors at the open-air market in Saint-Aignan a week before Easter, and I went and picked it up this past Saturday. We roasted it and made it our Easter dinner. 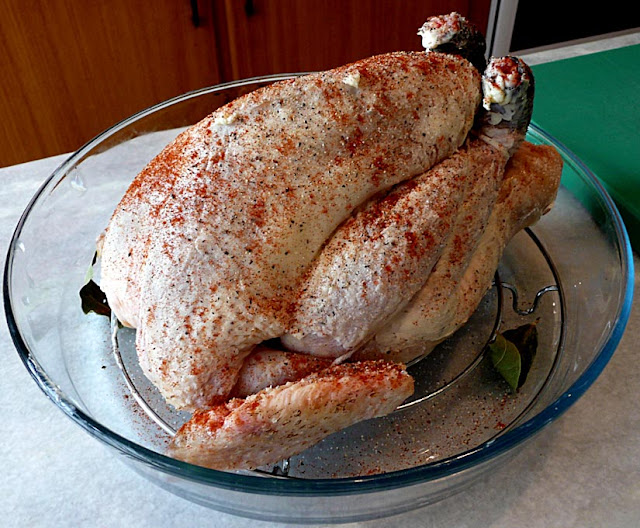 The géline de Touraine chicken ready for the oven

I just wanted to cook it simply — no sauce, no braising, no extra ingredients — to see what it would taste like. I'm glad I did, even though I now understand how good a géline prepared and served the way Ladybird described — in a Chinon red sauce with mushrooms — would be.

I've often bought and cooked farm-raised chickens here in France. They come from Brittany, or the Sarthe (around Le Mans), or other regions, and they carry the Label Rouge stamp of quality. But once in a while, I've found the meat kind of stringy. Sometimes the white meat will be really good, and the dark meat too tough — or vice-versa. That was definitely not the case with the géline. All the meat was tender though chewy, and none of it was dried out or stringy. 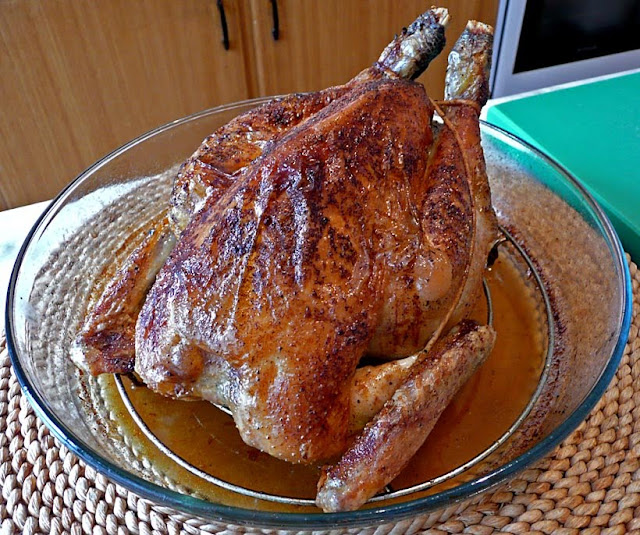 The géline as it came out of the oven

The géline meat was not mushy the way the flesh of the standard supermarket chickens can be. Those chickens, raised in cages, don't get enough exercise to give their muscles the workout they need to develop character and good texture and taste.

The géline de Touraine chicken is also called La Dame Noire because of its black plumage. This web site shows some photos of gélines, gives some recipes, and lists breeders who will take you for a guided tour of their operations. The breeders are near towns including Nouans-la-Fontaine, Chemillé-sur-Indrois, La Celle-Guenand, Cussay, Betz-le-Château, and Dierre — all south and east of Tours. 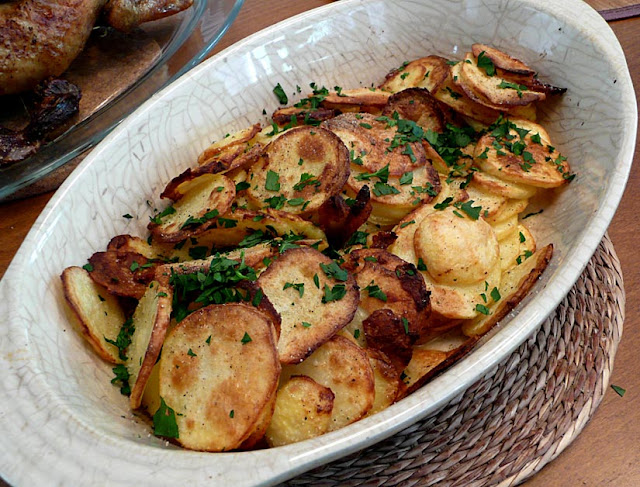 To go with the roasted géline, we just made some sautéed potatoes and a green salad dressed with vinaigrette. That's a French café classic and standard: Poulet rôti - frites.

I ended up roasting the géline on a rack in a pyrex dish instead of on the rotisserie. It just seemed easier to do. I rubbed softened butter onto the skin of the breast and drumsticks, sprinkled on some salt, pepper, and sweet paprika. I cut a big cloved of garlic in half and put it inside the bird. And then I poured some white wine in the bottom of the pan, threw in a couple of bay leaves, and set it in a hot oven. As it cooked, we basted it with the wine and drippings, and we gradually lowered the oven temperature so that the bird would be well-cooked but not too browned. 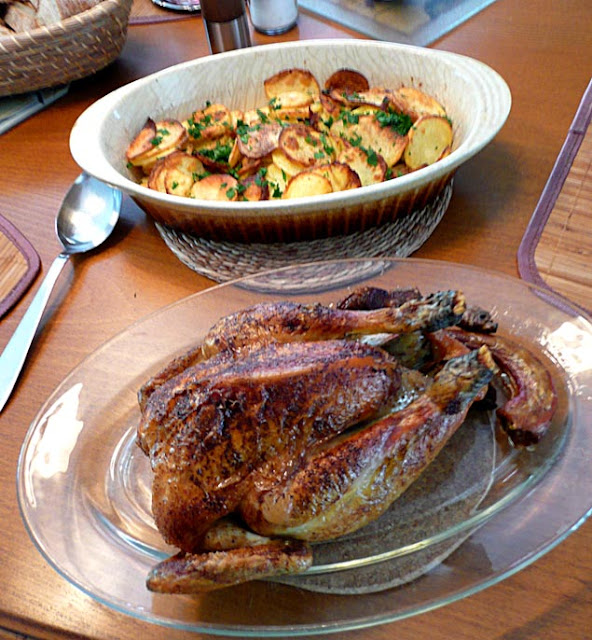 Meat and potatoes, and salad after

For a special treat, the géline is worth the price. Ours weighed 1.65 kg, or just over 3½ lbs., and cost €19.52 from the vendor at the Saturday market in Saint-Aignan. On one blog I found, the author says that gélines go for 25 to 30 euros, so I think we got a good price from our vendor.
Posted by Ken Broadhurst at 07:27