A recipe for Rillettes de Touraine

A couple of my blogger friends, Susan (Days on the Claise) and Martine (Wishing I were in France), have posted recently about the Touraine spreadable meat specialty called rillettes. I wish we had a better name for rillettes than the only one available, which is "potted meat" — that doesn't sound appetizing.

I guess the French word is our best option. Pronounce it [ree-YEHT] and in English I would pronounce the final S — it's a plural noun. On dit « des rillettes ». And they are easy to make. The cooking time is long, but the process is simple. Here's a recipe from a book called Cuisinière du Val de Loire — the Loire Valley Cook.

Start by lightly sautéing the pork fat, cut into fine dice, in a thick-bottomed pot. Then add the pork tenderloin cut into small pieces. Season with salt and pepper, add the white wine, and let it all simmer, covered, on very low heat for three hours. Stir it frequently with a spoon so that the fat and lean meats melt together completely.

Pack the rillettes into one large or several smaller ramekins. When they've cooled, pour on a little melted fat (lard, for example) to cover, and store them in the refrigerator. Or, instead of liquid fat, press a piece of parchment paper, cut to size, onto the surface of the rillettes. 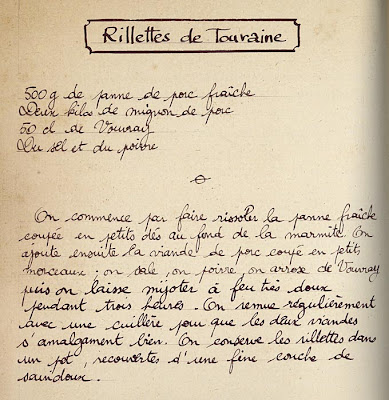 The recipe in French, from the book
Cuisinière du Val de Loire, published in 2007.
For more flavor, add a whole, unpeeled clove of garlic (or more) and a little fresh or dried thyme (or other herb) to the pot while the pork tenderloin cooks with the fat. Remove the garlic and any thyme stems before packing the rillettes into ramekins.

The layer of liquid pork fat (lard) your pour over the top of the rillettes will harden as it cools and will act as a seal to protect the meat from oxidizing. Cover the ramekins with plastic wrap or put them in zip-top plastic bags, in the refrigerator. For long-term storage, keep pots of rillettes in the freezer.

Don't be afraid of the pork fat. It's not much — maybe 20% of the total weight — and that's about the same amount of fat there is in a hamburger patty or a piece of cheese. One way to control the fat content of the finished product is to remove the shredded meat from the pot with a slotted spoon at the end of the cooking, leaving much of the fat behind. Then add back in enough fat to get the consistency you want.

Rillettes are not a main course but an appetizer or hors-d'oeuvre to enjoy with a glass of wine before dinner. You don't normally eat an enormous quantity of them. Spread the potted meat on toast or French bread and serve with sour gherkins (in French, cornichons) or olives. In other words, serve and eat rillettes just as your would a pâté.

Rillettes are a more "noble" product than pâtés, in a way. They are made with the best cuts of lean meat. Pâtés are often made from lesser cuts of meat, with generous portions of liver and other organ meats, a good amount of fat, some eggs, and herbs and spices.

You can serve a mound of rillettes with a big salad of tomatoes, green beans, diced steam potatoes, and lettuce leaves. Add some olives. That makes a nice lunch, with some bread and wine. Salades including rillettes and rillons at lunchtime are a local specialty. Look for a Salade Tourangelle on restaurant or café menus.

Here is an earlier blog post about commercially available rillettes in France, which are a standard item in all French charcuteries, markets, and supermarkets. And a post about making rabbit rillettes is here. We used to buy duck rillettes at Whole Foods when we lived in San Francisco — maybe that chain has a wider selection these days. Rillettes can also be made with pork, rabbit, duck, goose, or even chicken. Use pork, duck, or goose fat with any of the other meats for the cooking.

Tuna and salmon rillettes, made with mayonnaise instead of pork fat, are also good. You might recognize them as tuna salad or salmon salad. It's the same principle — shredded meat mixed with fat so that the result can be spread on bread.
Posted by Ken Broadhurst at 08:10