I have now read all 119 comments that David Lebovitz got on his 2008 blog postings about making kimchi. Not to mention his recipes. David gave two recipes, here and here. You might think that would do the topic in, and I'm two years late in discovering all this. Reading it all informed me and entertained me, but didn't discourage me from going ahead and posting the rest of my pictures and text about making Korean-style fermented cabbage — chou fermenté à la façon coréenne. Here's a link to my first topic about kimchi.

One thing I find frustrating about a lot of recipes is that they call for ingredients I just can't get here in Saint-Aignan. Okay, I know I chose to live here. And I'm not talking about David Lebovitz's recipes. I'm talking about ones that say things like "add a jar of bulgogi marinating sauce." Where would I ever find that? Without driving to Paris, I mean. Or taking the train. Don't tell me to buy it — tell me how to make it. [End of rant.] 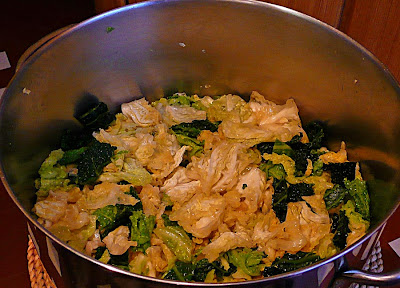 When I salted it down, the cabbage filled this pot.
A day and a half later, it had wilted down to this level.

Hell, I can't even find fresh coriander (well, only once in a great while) or green onions (a.k.a. scallions, spring onions) here in Saint-Aignan. Guess what — they only have spring onions here in the... spring! What I have to do is grow them, along with fresh coriander/cilantro, and I do, but this is not the gardening season. There's a good inch on snow on the ground, and the temperature hasn't gone above freezing for a week now.

I'm not sure I can even find Chinese or Napa cabbage in area markets and supermarkets. Maybe. Or maybe I'll be able to grow some in the spring. However, none of that makes me give up on the idea of making kimchi, for example, once that idea has taken root in my brain. Adapt, adapt, adapt, as they say in the translation business. You can't translate much if you stick to the word-for-word strategy. Or cook much. That's how I feel about recipes too. Adaptation. 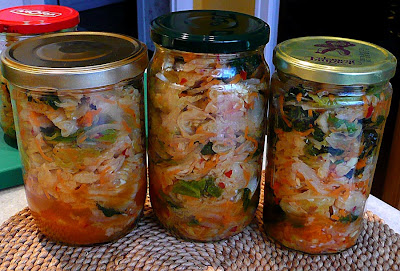 So when I got ready to make kimchi, I went to the supermarket and bought a French cabbage. The texture is entirely different, I know, but the taste is similar, and it's good. Savoy cabbage has crinkly leaves instead of smooth ones. Normally, it benefits from long, slow cooking.

I ended up chopping it up, salting it down, and letting it macerate in the salt for 36 hours. For one big cabbage, at least 5 lbs., I used three-quarters of a cup of coarse salt (gros sel de Guérande sans additif). I tossed the chopped cabbage with it and waited for the leaves to look slightly translucent and limp. That took a while. Then I rinsed the cabbage four times in fresh cold water, including let it soak in fresh water for an hour at one point. I tasted it as I worked. When the salty taste was just right, in my opinion, I stopped. 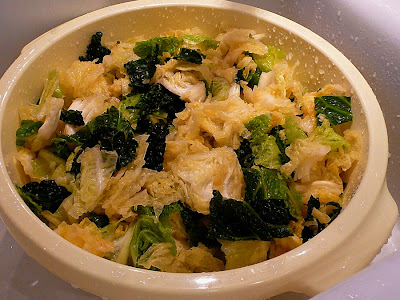 Rinse and drain the cabbage after salting.

Now I know about the theory that says the saltiness will go away as the cabbage ferments. And I'm sure it happens that way. The same thing applies to confit de canard (duck cooked and preserved in its own fat). You salt the duck pieces heavily. Then you cook them with all that salt on them if you plan to keep the confit for several months before eating it. Over time, the duck and salt will be transformed by a process of osmosis. The salt will meld with the duck and duck fat, and the result will be an incomparable taste that you wouldn't think of as particularly salty.

That's the theory about kimchi too, I think, but then you have to be willing to let it age for a long time if you make it that way. I wasn't sure we would want to wait that long, so I tried to rinse off the salt. We ate some of the kimchi only 24 hours after I put it in jars, which was 96 hours after I first salted it, and it was pretty tasty. And not particularly salty or strong-tasting. Just sweet, tangy, and spicy. 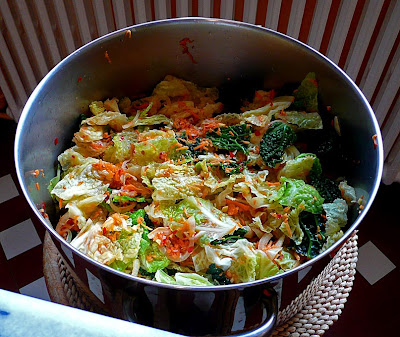 Mix the "dressing" with the wilted cabbage and let it sit
for a day before putting it in jars.

If you want to cook and eat duck confit right away, you rinse the salt off the duck pieces. You do the same thing with the French version of salted, fermented cabbage, which is sauerkraut or choucroute. You rinse it in three or four waters before cooking it in white wine. That is, if you can get sauerkraut that is not pre-cooked. In America, you probably can't. You probably can't get it cooked in wine either. Sometimes I can find it raw here, and it's much better if I cook it myself. In white wine, of course.

What makes my kimchi sweet is... well, at least three things make it sweet. Grated carrots, sugar, and fish sauce. That's Thai fish sauce, and it is one of those ingredients that I can find here in the Loir-et-Cher department of central France. I have to drive an hour to the Asian grocery in Blois to get it, but I make the trip a few times a year so that I can have fish sauce on hand. It keeps indefinitely at room temperature. The ingredients on the label are water, anchovy extract, sugar, and salt. This is the kimchi we ate about four days after starting
the pickling process. It was crunchy, sweet, and spicy.

I also put vinegar in my kimchi. A lot of people say you shouldn't. The tangy taste should come from fermentation, some say, not vinegar. But a lot of recipes I've found include it. And vinegar, an acid, helps preserve vegetables and keeps bad bacteria from growing in and on them as they age. I feel safer adding vinegar.

It's hot pepper vinegar, by the way, which I made by pouring boiling vinegar over cayenne peppers that I grew and canned to keep for a while. At this point, I've been using the peppers and the vinegar for about five years. We had a good crop of cayenne peppers in 2004, and all subsequent attempts to grow them have been pretty much a failure. Go figure.

Anyway, here's the recipe for the "dressing" I put on the salted, wilted, rinsed cabbage once I decided it was ready to be put into jars as kimchi. It's not original. I got it off this blog written in French by « Madame Choi ». She says it is a kimchi that is slightly toned down for French tastes. French people are notoriously not tempted by overly spicy foods. I added more hot pepper than Madame Choi's recipe called for. I also added some of my hot pepper vinegar, as I said. 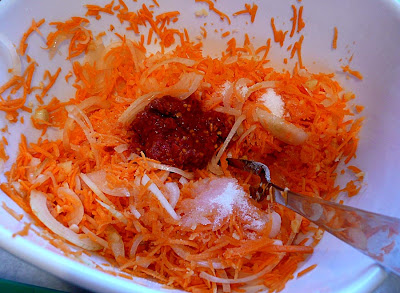 Madame Choi says to leave Napa cabbage in salt for at least 8 hours. As I said, my Savoy cabbage macerated in salt for 36 hours. This is my recipe, adapted and translated from hers, for 5 lbs. of cabbage, salted, then thoroughly rinsed under cold running water, and drained:

Mix all ingredients together in a bowl. Add to cabbage and toss well. You might want to wear rubber gloves if you decide to use your hands to toss it.

Put the kimchi up in clean, hermetically sealed glass jars. Let it stand and ferment at room temperature for a day or two if you want, and then store the jars in a cold cellar or in the refrigerator.