Yesterday Walt posted a topic about a salad of grated celery root (a.k.a. celeriac) in a white dressing that we served the other day with strips of smoked salmon and some black olives. The salad, called céleri rémoulade in France, is delicious. In a way, it is a French version of cole slaw.

If you've traveled to and around France, you've probably seen the white céleri rémoulade salad in charcuterie shops — French-style delicatessens — as well as in restaurants and cafés, and even in the supermarkets. It is very much a standard item, along with salads of grated carrots and diced cooked beets in vinaigrette. The problem with the supermarket versions is that the dressing is often too sweet. 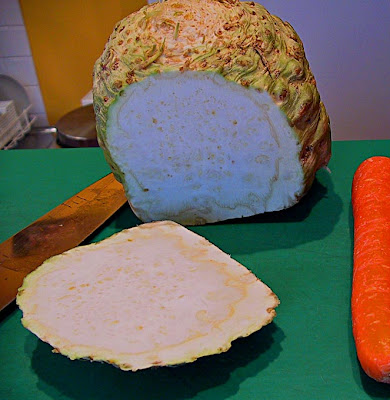 There are many recipes for céleri rémoulade, and I've been looking at them again over the past few hours, both in French and in English. I've looked in cookbooks, and I've looked at recipes on the Internet. Most of the recipes are glaringly incomplete, or call for ingredients like hard-boiled egg, capers, cornichons, and Roquefort cheese that you would never find in céleri rémoulade in the French deli version. Even the standard French cookbooks and Julia Child give recipes that are slightly off, in my opinion. Most use just mayonnaise as the dressing, or an emulsion of mustard and oil without any egg.

I found an interesting discussion from 2008 on an Internet forum at Supertoinette, which is a French site for home cooks. On the forum, somebody wrote in and asked for a recipe for céleri rémoulade that would produce a result like the salad she buys in the shops. The next person said that after trying many recipes, she had never found a version of the dressing that was as white as the sauce the professionals made to dress the grated celery root. 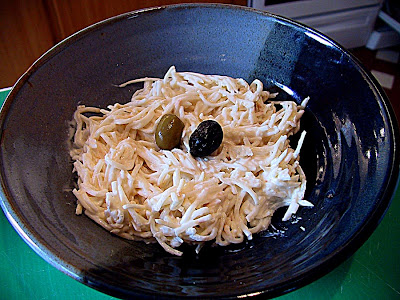 Celery-root salad is good garnished with green or black olives

Somebody suggested beating some water into home-made mayonnaise to lighten its consistency and color. I've tried that myself, with mixed results. That kind of mayonnaise makes a good dressing for potato salad, for example. Somebody else on the Supertoinette forum said the professionals must have a « truc » — a trick or secret — for making the white celery-root salad dressing, and she hoped to find out what it might be.

And then a woman who calls herself « P'tite maman » on the Supertoinette forum gives the answer. She says: "I knew a charcutier who gave me his recipe for the céleri rémoulade dressing. It nothing more and nothing less than a good mayonnaise into which you incorporate some crème fraîche. That gives the dressing a white color and makes it lighter, easier to digest." 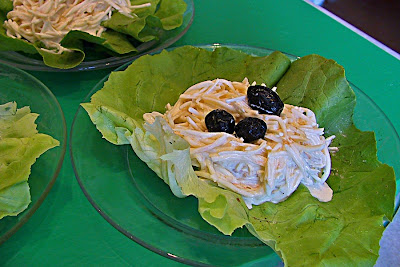 It's also good with lettuce and with smoked salmon.

That's what Walt and I do now, and it's as good as what we get from the local charcutiers and better than what we've bought at the supermarket. The dressing is approximately half mayonnaise — home-made is better, because it doesn't contain sugar or other sweeteners — and half cream — French crème fraîche is what would be used here, but I bet American sour cream would be good too. Or you could put in a combination of plain yogurt and whipping cream. You'd have to experiment with that. Mayonnaise alone is not as good. Nor is cream alone.

And don't forget the mustard. Mayonnaise as made in France already has some mustard in it, and that would be Dijon mustard. But the celery-root salad needs more. For half a cup of mayonnaise and half a cup of cream, add a tablespoon of Dijon mustard, and some salt and pepper of course. That should dress about a pound of celery.

As for the celery root, peel it to remove the layer of bumpy skin completely, and then grate it finely. Raw, of course. Walt grates it in the food processor using a blade that grates vegetables finely, and that goes really fast. The salad is better if you put it together and let it "marinate" in the refrigerator for a few hours before you eat it. The dressing "cooks" and tenderizes the grated celery root that way and gives it a nice texture.

I think you can find celery root in the U.S. these days. It's also good cooked like boiled potatoes, or cooked and mashed with an equal weight of boiled potatoes to make a nice purée. Try it.