“A family name consisting of a single letter might seem odd, but this one is not some humorist's invention — it's real. The O family is a very ancient and honorable Norman line that distinguished itself during the Crusades...”

I'm translating from a card I found about the Château d'O in a set published by Larousse and Laffont called Les Fiches de France. The woman we bought our house from here in Saint-Aignan gave us the set, which covers all the regions of France and describes many major attractions and landmarks. 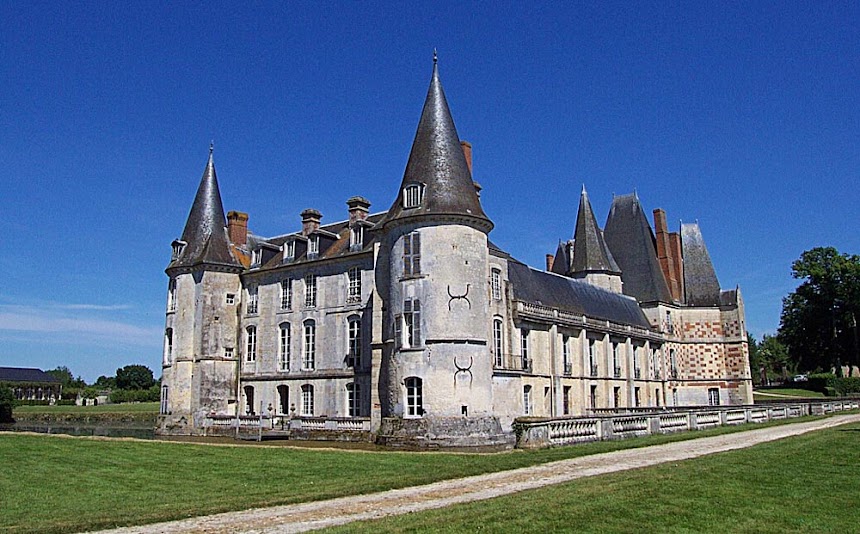 The Château d'O in Mortrée near Argentan and Alençon
“One of the members of the O family, John the First of O, a former chamberlain to the French king Charles VIII, undertook the construction of the family château between 1475 and 1500, on the site of a fortress that had been demolished during the 100 Years War.” 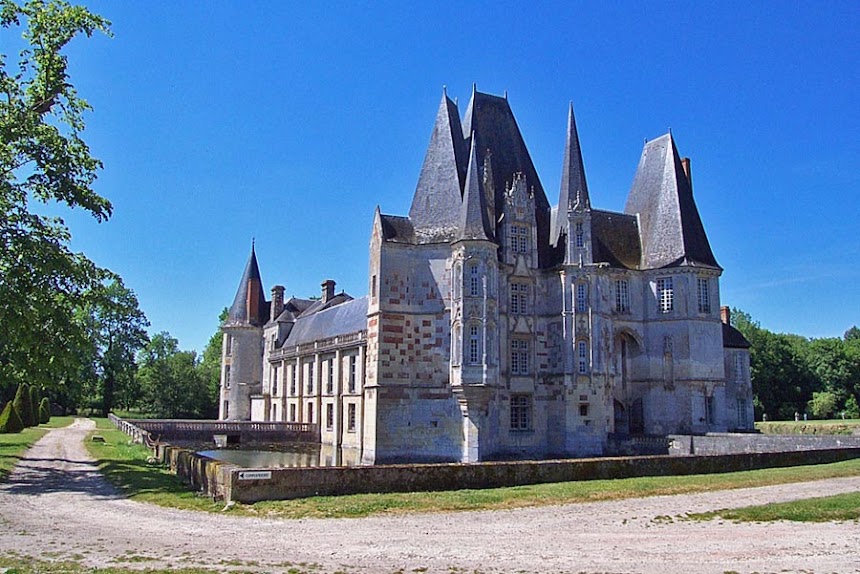 The Château d'O would be at home here in the Loire Valley.
The Château d'O is located near the village of Mortrée, just south of the Château de Médavy, between the major Lower Normandy towns of Argentan and Alençon, a few hours west of Paris. CHM and I visited the grounds in June 2001, and Walt and I returned with our friend Sue to see it again in June 2006. 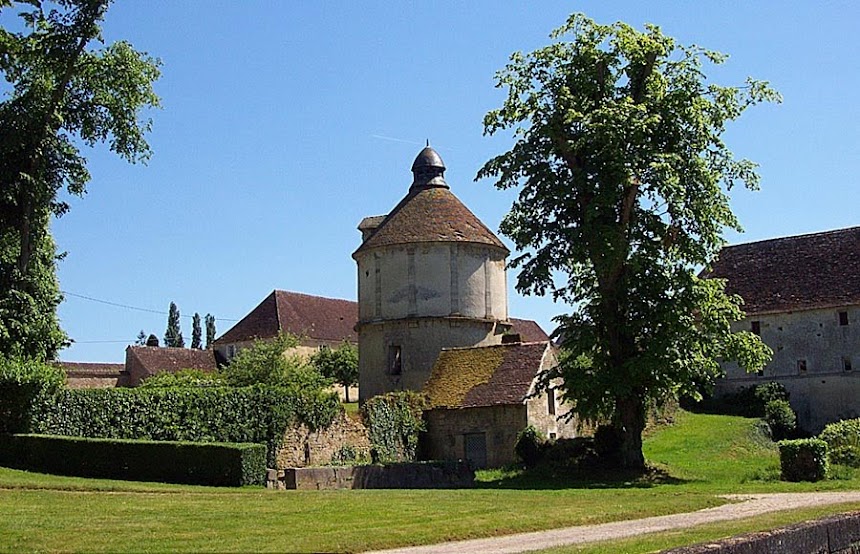 When you arrive at the O property, these are first buildings
you see. The round tower must be a dovecote.
The château, which was built over a period of decades and then modified and added to over the centuries, like most of the surviving French châteaux, is made up of buildings and wings in several different styles, from Gothic to Renaissance. 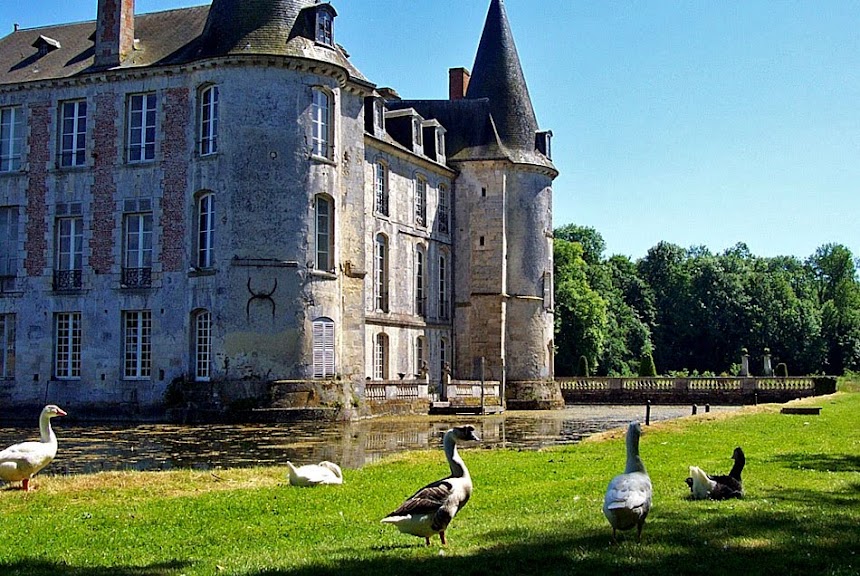 Geese strolling about at the Château d'O
The Fiches de France quotes the writer Jean de la Varende, who described the Château d'O in these terms: “...the color of honey and dried roses, all elaborately ornamented, set in a moat of flowing green water. A very rare and successful example of the flamboyant style applied to a private residence, a delicate beauty, almost too pretty, but exquisite. ” 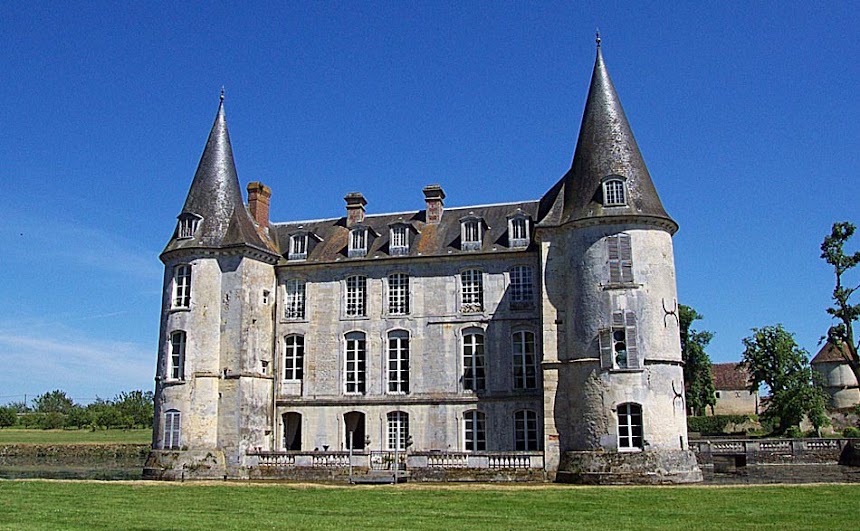 You can see from the deep blue sky what a beautiful day it was.
The last member of the O family, François, who was successful in king Henri III's employ but proved to be a disastrous financial advisor to king Henri IV, was a dandy who died a pauper, under a mountain of debt, in 1594. 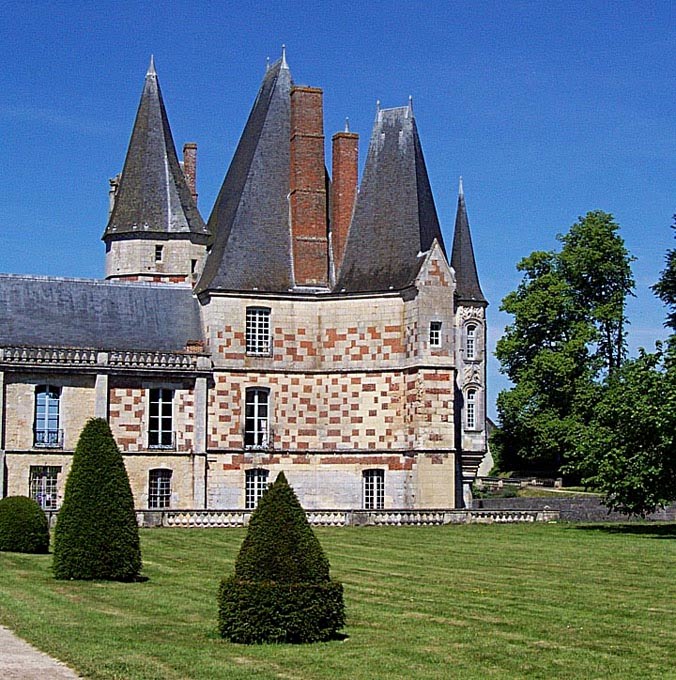 Brickwork at the Château d'O in Lower Normandy 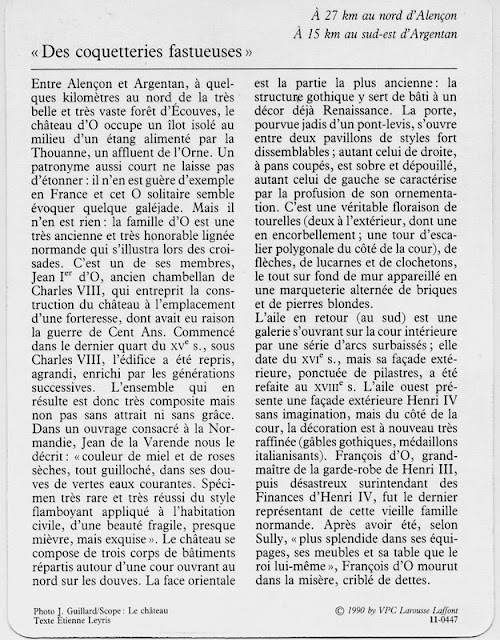 
When CHM and I were there in 2001, the Château d'O was open, but there were just a few other people wandering around the grounds. We spent a few minutes taking pictures and then moved on towards the towns of Sées and Carrouges.
Posted by Ken Broadhurst at 19:04