I had a chicken in the freezer, and it was a Label Rouge poulet noir — a black-feathered chicken from Brittany — and a bottle of hard apple cider that had been on a rack in the downstairs pantry for 5 or 6 years. And then I saw a guy on Cuisine TV make a chicken cooked in a sauce of cider and apple brandy. He called it Poulet Vallée d'Auge. There was my idea. 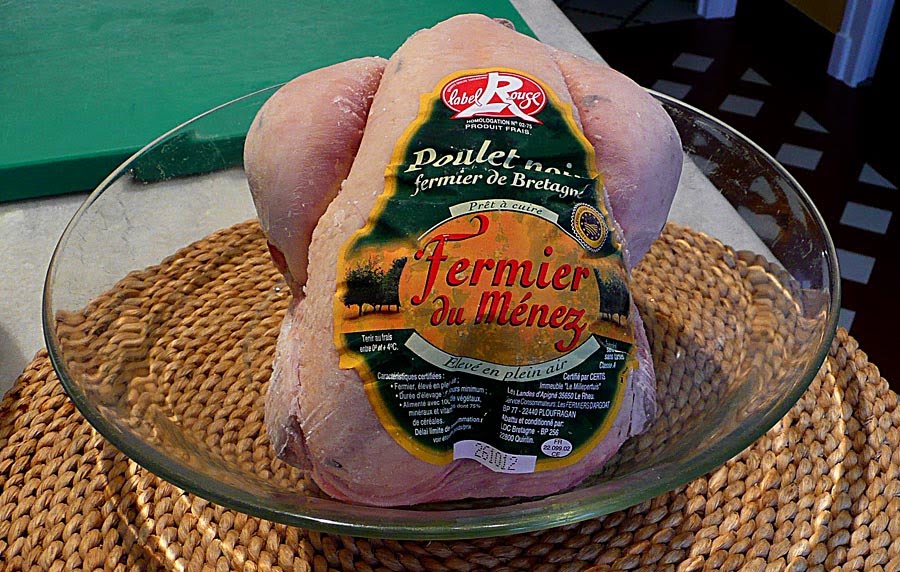 A poulet noir from a farm in Brittany —
the feathers, not the meat, are black


There was no recipe on the Cuisine TV site and I hadn't watched the show that carefully. So I found a recipe here: Normandie-Héritage. Just now I looked and finally did find a recipe (in French) posted by Laurent Mariotte, the chef I saw on Cuisine TV last week. It's here, and it's a little less complicated than the one I made. However, Mariotte's recipe doesn't include any apples, and apples are an essential ingredient in the area known as the Vallée d'Auge. 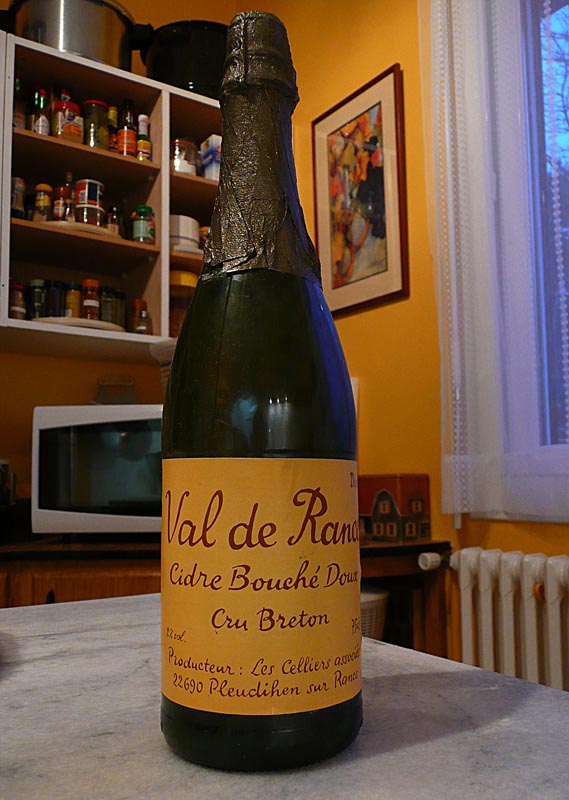 
Of course, both my cider and my chicken came from Brittany, but that didn't stop me. As you might have surmised, the Auge Valley is in Normandy. It is the heart of what is called Lower Normandy, where the largest city is Caen. It is a region of very green hills and valleys, and it's cheese country: Camembert, Livarot, and Pont-l'Evêque, the three most famous cheeses of Normandy, originated there in villages bearing those names. The other essential products of the Auge Valley are apples, cider, and the apple brandy called Calvados, along with — as in all of Normandy — rich, thick cream and unsalted butter. 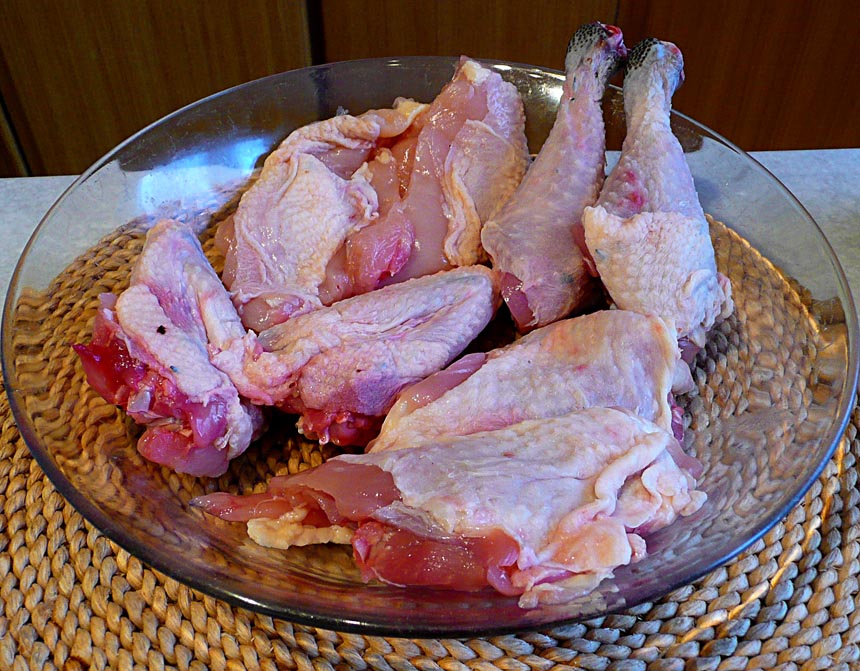 
The only thing you might think is complicated about the Normandie-Héritage recipe is that it calls for cutting up the chicken and making stock with the carcass. The parts of the chicken that you serve are the wings, thighs, legs, and boneless breasts. What's left after you cut those away goes into the stock pot with carrots, onions, celery, and herbs. Cover it all with water and simmer it for an hour to make a nice broth. You can make it ahead. 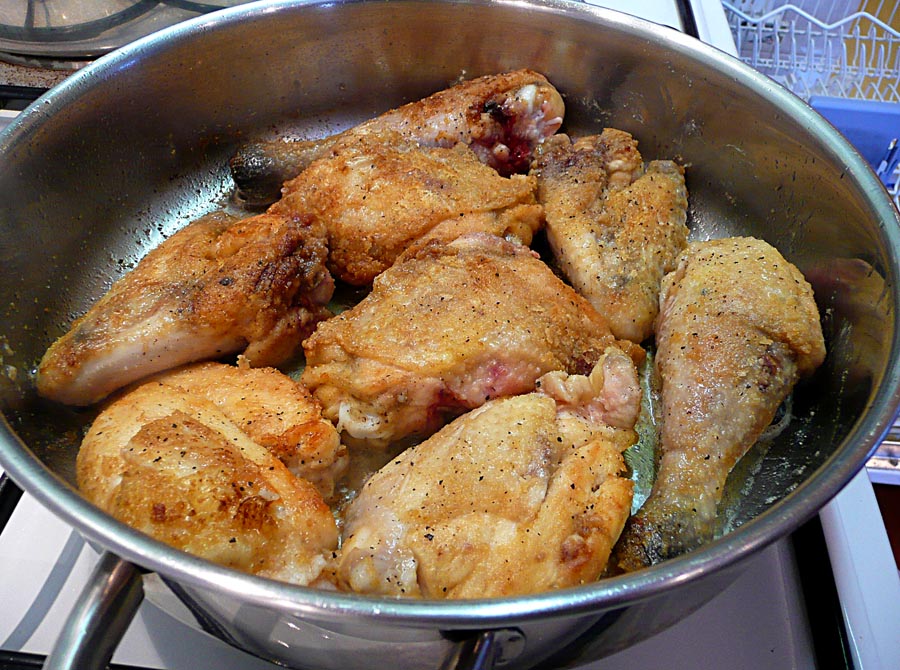 The chicken pieces browning in a pan in butter

You could of course use chicken broth you've already made or bought, and chicken parts that you've bought too. That would simplify things.


One thing I really liked about the Normandie-Héritage recipe is that it calls for panning the chicken pieces in butter until they are browned, and then putting the pan in the oven to finish cooking. It doesn't specify a temperature or a cooking time — a lot of French recipes are vague on such details — but leaves it up to the cook. 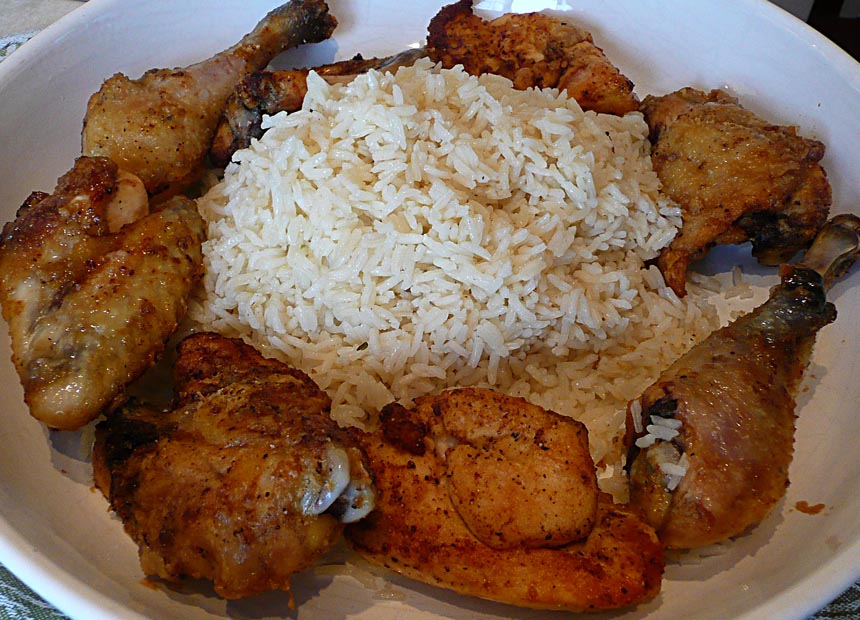 The chicken before putting the sauce on it — we had it with rice.


The result is chicken that is more roasted than braised. Other recipes say to simmer the chicken in apple cider, which gives a different result entirely. I like the chewier texture of the roasted chicken with the sauce. Again, it's your choice.


The sauce is easy. It's approximately equal amounts of cider and chicken broth, with some shallots and cream.

Okay, here's the recipe — my translation and adaptation. 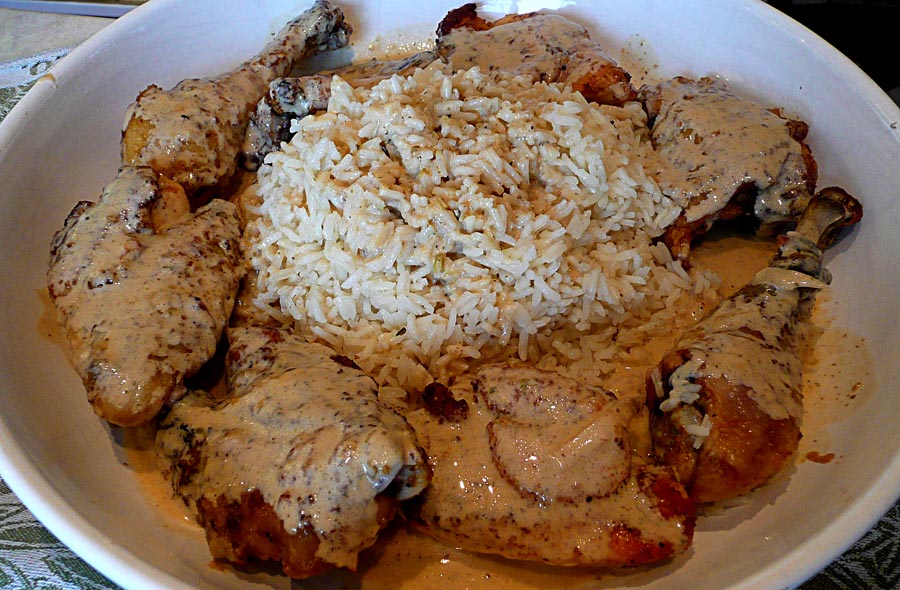 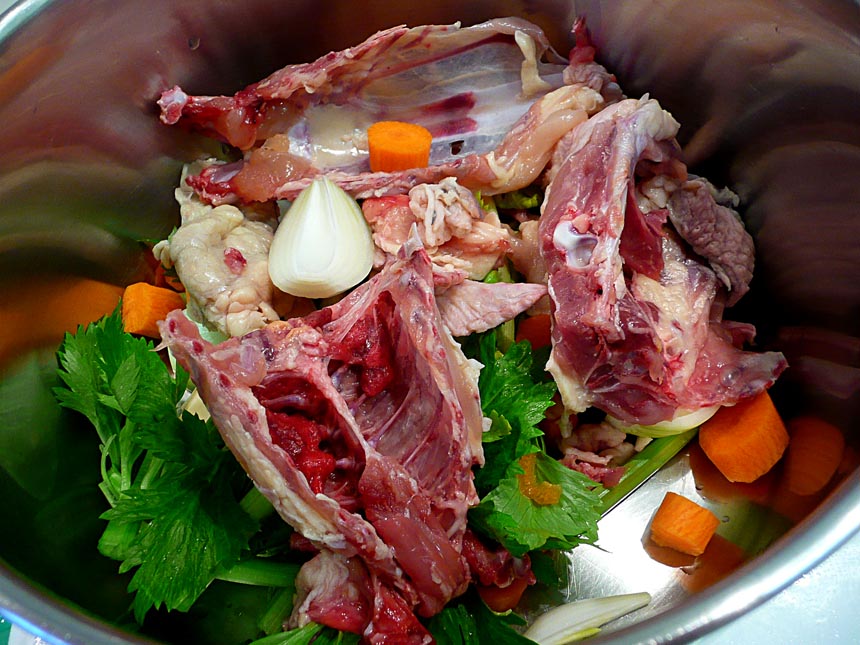 The chicken carcass and aromatic vegetables in a stock pot 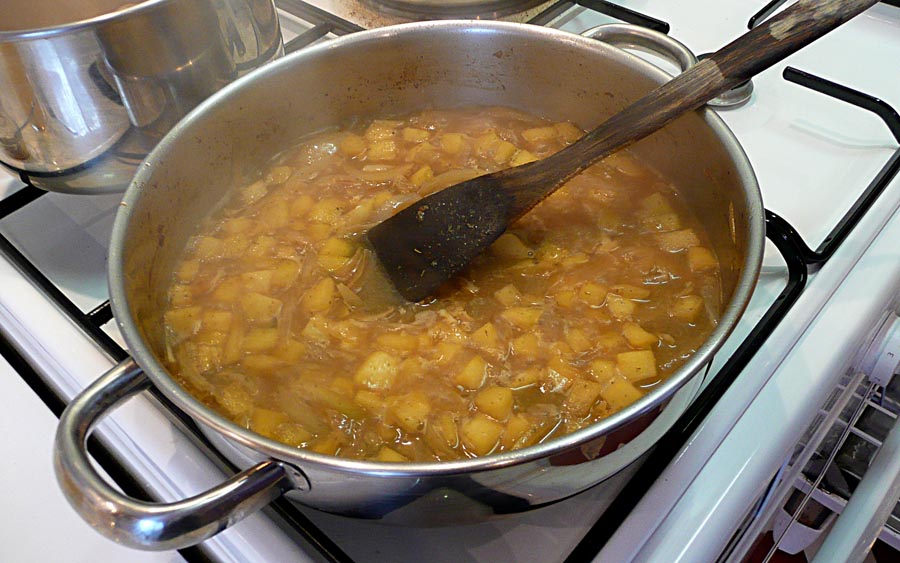 Shallots and diced apple cooking in chicken broth and cider


Cut the chicken up and set the wings, legs, thighs, and breasts (boneless) aside.

Cut the carcass into two or three pieces and put it in a pot with the other ingredients for the broth. Add enough water just to cover everything and set the pot on high heat. Bring to the boil and then simmer on low heat for 1 hour. Strain and reserve the broth.

When the broth is made, salt and pepper the chicken pieces and sprinkle or lightly dredge them in flour. Cook them in butter in a skillet or sauté pan until they are nice and brown. Set the pan in a 300ºF/150ºC oven for 20 minutes or until you're sure the chicken is done. Then turn off the oven, take the chicken out of the pan, and put it on another dish or pan in the oven to stay warm.

Pour off any extra fat left from cooking the chicken and sauté the shallots in that same pan. Peel, core, and dice the apple. Add the apple and the apple brandy to the pan with the shallots and sauté until the brandy has evaporated. Pour in the broth and the cider and let it all reduce by about a third on high heat. Add the cream and let it reduce again by about a third. When it's done, strain it.

Meanwhile, make the three garnishes (or at least the mushrooms — the pearl onions and apples are optional but delicious).

Put the chicken pieces and the garnishes on a serving dish and pour some sauce over all. Serve the rest of the sauce at the table.

A lot of recipes like this one instruct you to discard all the vegetables used for flavor — the carrots and leek or onion that cooked in the broth, the shallots and apple that cooked in the sauce. That's restaurant cooking for you. If you are serving the dish to family at home, save the aromatic vegetables and serve them with the sauce. And why not some steamed rice or pasta to go with that sauce and all the rest?
Posted by Ken Broadhurst at 07:35