... to take an attractive and appetizing picture of a dish like Southwestern France's cassoulet. Maybe you've never tried — okay, I'd feel pretty safe betting that you haven't. LOL as we say. I've tried and this is the best I've been able to come up with. That was an unfortunate choice of words, probably.

Cassoulet is the meal we have been eating on New Year's Day for the past few years. It all started, I think, because of the Southern U.S. tradition of eating black-eyed peas for good luck on the first day of the new year. I decided the best way to cook the black-eyed peas was in a cassoulet. And that's what I started doing. Here's a link to my blog post about it. 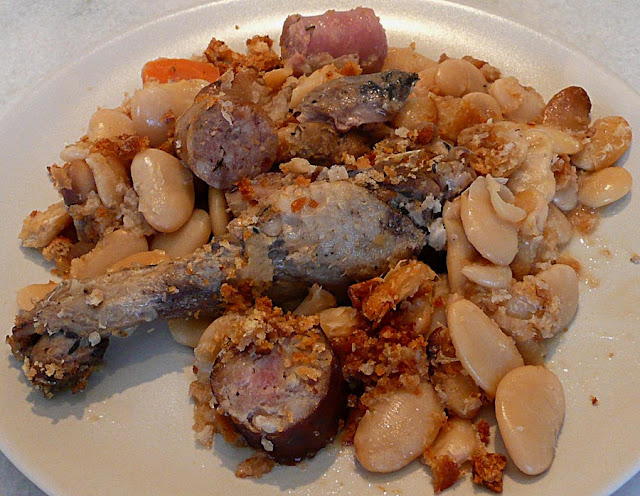 This morning the temperature is -6.4ºC — +20.5ºF. Yesterday it got colder and colder all through the day, dropping from just below freezing when I went out with the dog in the morning all the way down to -4.5ºC by bedtime. Snow is supposedly moving in from Brittany and Normandy.

It will be a good day for a hot lunch of leftover cassoulet. And that's what we are going to have. To go with it, I'm thawing some collard greens that I cooked with duck fat a few weeks ago. By the way, I wonder if my collard greens and Swiss chard plants are going to survive this hard freeze... My fingers are so cold this morning that I'm having trouble typing.

Anyway, how do you make cassoulet? It's easy, but there can be a lot of ingredients and some long waiting times. The indispensable ingredients are beans and the slow-cooked duck called confit de canard (or goose — confit d'oie). As for the beans, the classic cassoulet is made with large white beans called lingots or tarbais beans. Cannellini beans are similar, or you can use great northern or navy beans. Or, as I said, black-eyed peas. 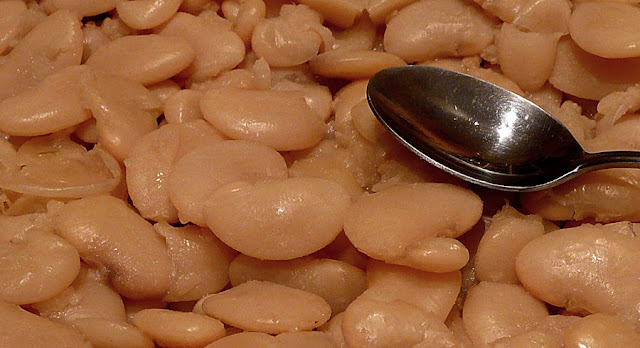 Big lima beans after cooking, with a teaspoon for scale

This time I used the giant lima beans that I think might be called Fordhook limas in parts of the U.S. I'm not talking about green "baby limas" but white, very large dried beans. When Jean and Nick were over for a cassoulet lunch on New Year's Day, Jean reminded me that these beans are called "butter beans" in England.

If you use dried beans, you just need to cook them in water with aromatics like bay leaves, pepper, herbs, onion, garlic, and carrot — but no salt. To keep them tender, salt them only after they have cooked. You can also use beans out of a can/tin to make a cassoulet.

As for duck confit, if you can buy duck leg sections and wings, it's easy. The leg sections sell for about six euros a kilo here in Saint-Aignan, at the supermarket — that's about US$4.00/lb. Expect to pay more in America, I think. Oh, you also need a lot of duck fat. Or lard. I think you could even use vegetable oil — even olive oil — to make the confit. 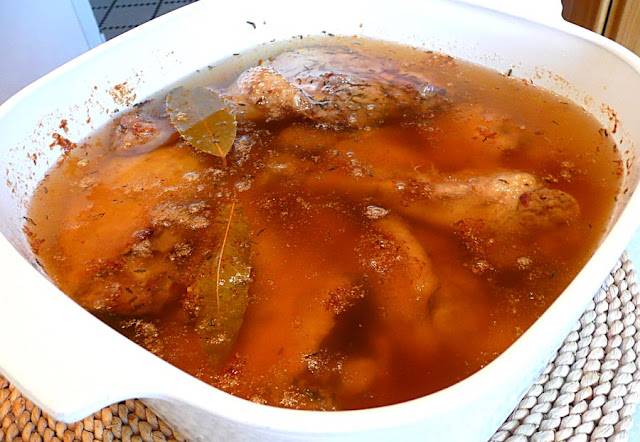 Confit de canard is duck pieces cooked slowly, at low temperature, in fat. In Southwestern France, where the diet is based on duck and goose, the fat used is always either duck or goose fat. What you do is put the duck or goose pieces in a pot or deep dish, pour on enough fat to cover them, and cook them slowly either on top of the stove or in the oven for about two hours.

The fat on a duck or goose, as on a chicken or turkey, is located under the skin, not mixed in with the lean meat. When you slow-cook the duck in fat or oil, the fat under the duck skin melts and blends with the cooking fat. By the way, you can make confit de dinde — slow-cooked turkey — the same way. I've done it and it was very good.

I'm not saying you can make confit with vegetable oil that will be as tasty as confit made with duck fat, but I'm sure you can make it that way. And the by-product will be a good quantity of duck-flavored oil that you can use for sauteeing potatoes or seasoning vegetables. I would try the vegetable-oil confit myself except for the fact that I have several quarts of duck fat in the refrigerator (just for cooking emergencies, LOL). It keeps indefinitely in sealed jars. 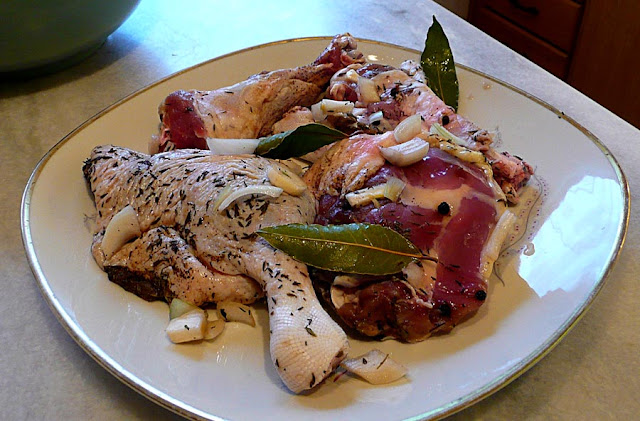 Duck pieces in their dry marinade, before rinsing

The first step in making confit is to marinate the duck or other poultry pieces in coarse salt (gros sel) and aromatics. No liquid is required. Put four duck leg/thigh sections in a plastic bag, pour in a quarter-cup of salt, add a chopped onion or two, a dozen black pepper corns, six allspice berries, and three or four bay leaves. Some dried thyme is a good idea too. Close the bag so that all the air is pushed or sucked out of it, put it in a bowl, and let it sit in a cold place for 12 hours or longer. I've marinated it for as long as 48 hours. 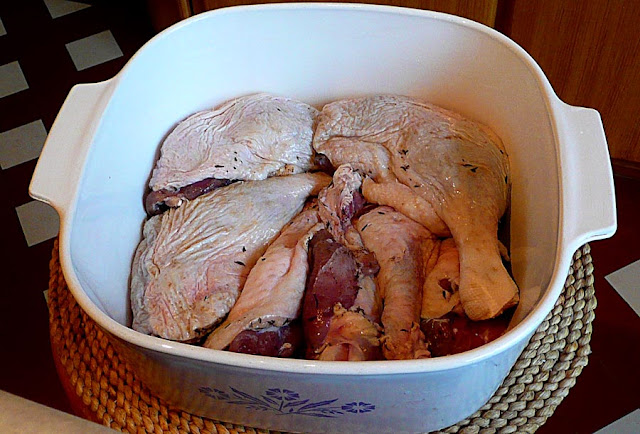 The duck pieces rinsed, dried, and packed in a dish
for cooking in fat to make confit

When you open the bag, rinse off the duck legs under cold running water and then dry them off. Now you are ready to put them in a pan or dish, pour the fat or oil over them, and cook them slowly for two hours. When they are done and close to falling apart, take them out of the fat with tongs and put them on a rack over a pan so that the cooking fat drips off. At this point you can brown them in the oven or a skillet if you want, or you can use them just as they are. 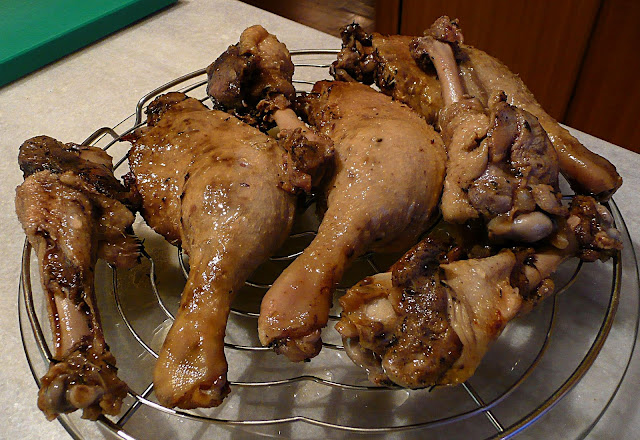 To put together the cassoulet, cook about 2 pounds of dried beans or use two large cans/tins of white beans. Put a layer of beans in the bottom of a deep baking dish and lay the pieces of slow-cooked duck on top of them. Put the rest of the beans over those to make the top layer. 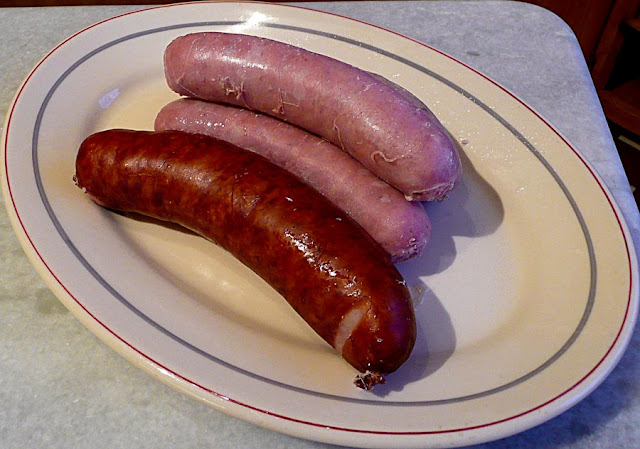 Plain Toulouse pork sausages plus
one smoked Montbéliard pork sausage,
after poaching in water for 20 minutes

Other good meats to put in a cassoulet are sauteed lamb or pork and sausages. The plain pork sausages called saucisses de Toulouse are classic. Chicken or duck sausages would be good too. Cook them first, if they are sold uncooked, by poaching them in water. Cut the cooked sausages and meats into chunks and put them over the first layer of beans with the duck pieces. Put more beans over all, as I said.

Pour just enough broth over the beans and meats to come almost up to the top. You don't want the beans covered, just kept moisten during the cooking. Chicken or duck broth is good to use, or vegetable broth. Some people put a little tomato or tomato paste in the broth, but I don't. I do like to mix some cooked carrots in with the beans though. 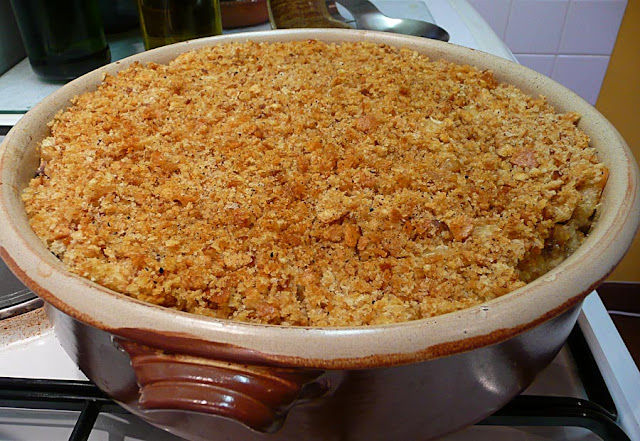 The cassoulet ready for the oven

Then take a cup or even two of bread crumbs and spread them over the top. Dribble some duck fat or some of the oil you cooked the duck in over the top and put the cassoulet in a slow oven (250º to 300ºF) for two to four hours. Keep an eye on it so the top doesn't scorch, and make sure it doesn't dry out completely. Add more broth as needed, in small quantities. 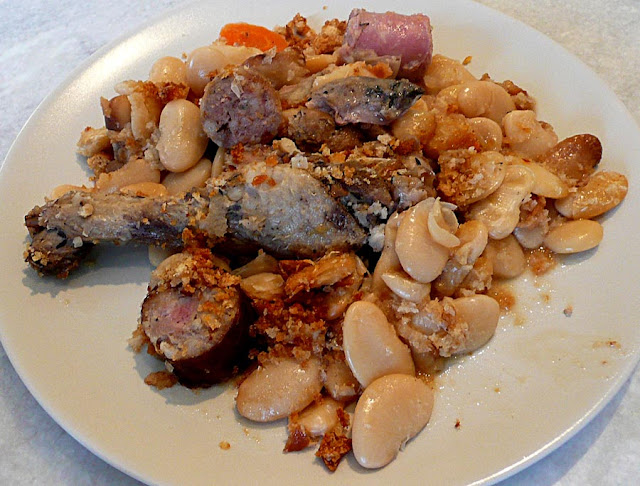 You see, cassoulet is not a recipe, really, but a cooking method. It will be as good as the ingredients you use to make it, if you plan ahead and cook it carefully.