Turnips and gizzards for lunch

The kinds of food ideas and recipes that I put on this blog are things we probably wouldn't be eating if we lived in the U.S. Sometimes the ingredients are available there, sometimes not. Usually I try to highlight a particularly French ingredient, or one that you find more often on the French table than on the American table. And I like to cook following classic French methods, which often means long slow cooking. 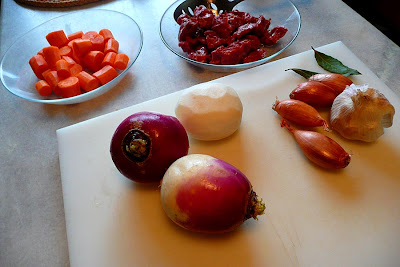 Turnips
When it comes to ingredients, cooking French country-style means using a lot of vegetables. Turnips, for example. How many Americans really buy, cook, and eat them? How many people wouldn't touch a turnip with a ten-foot pole? (One American woman we had over to dinner last year made a terrible face when I offered her a cooked turnip.) You can say the same about carrots — especially cooked carrots, which appear everywhere in French everyday cooking. Some people really don't like them. 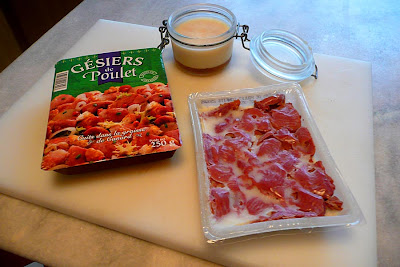 Gizzards
And then there are meat products like chicken or duck gizzards (gésiers). They are available here in the supermarkets in shrink-wrapped packages. Vacuum-packed, in other words, and Fresh, not frozen. I imagine most people who buy them use them in salads. Salade de gésiers is a classic in French cafés and restaurants.

The other day I went shopping at the local Ed store — Ed stands for Epicerie discount (épicerie means grocery store), and falls into a different category from full-service supermarkets like Intermarché and SuperU. Ed is a speciality store with a more limited line of products — groceries only (imagine that!). The category it and similar stores (Netto, Aldi, Leader Price) fall into is called "hard discount" in French (or Franglais, if you prefer). Pronounce it ard discoont. 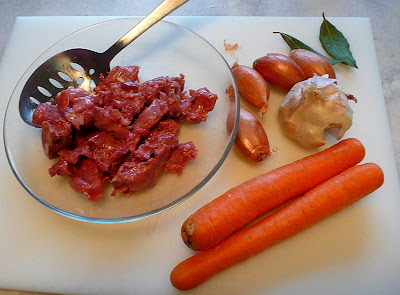 Put the gizzards in a warm pan and wait for the duck fat
to melt. Take the gizzards out with a slotted spoon and
then cook chicken and vegetables in the fat.
Anway, at Ed they had a big crate of beautiful round turnips (navets). I hadn't cooked turnips in a while, so I was tempted. I bought six, and I thought I'd figure out something to do with them. Ed also had carrots on special: a two-kilogram bag for 99 cents. That's 4½ lbs. for less than $1.50. I couldn't pass that up. It meant we had to be creative with carrots for a week or two. 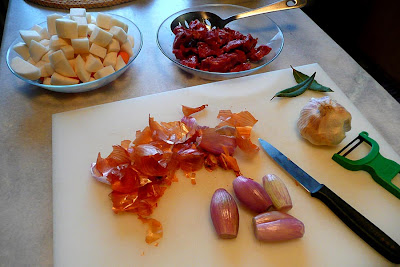 Peel some shallots but don't bother peeling
the garlic cloves until you find one on your plate.
I walked out of the produce section and passed the meat counter. Up on the top shelf I noticed packages of gizzards. Duck or chicken. The duck gizzards cost about twice as much, so I bought the chicken gizzards. They were confits — that means slow-cooked in fat (in this case duck fat) until they are very tender. The gizzard is a tough muscle and you can't really eat it unless it is cooked slow and long. Tender, it is succulent and tasty. 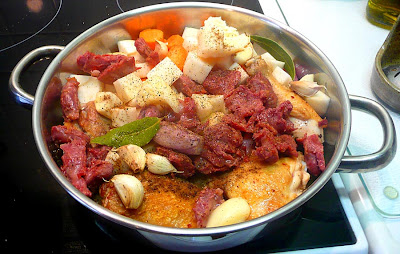 Fry the chicken skin-side down in duck fat first.
Turn the pieces over and add gizzards and vegetables to the pan.
I thought the turnips and gizzards might be good together. One classic dish in French cooking is duck with turnips (canard aux navets). So why wouldn't chicken and turnips be good cooked the same way? Or chicken gizzards? Especially ones that have already been cooked in duck fat. I also had some chicken leg & thigh sections in the freezer. 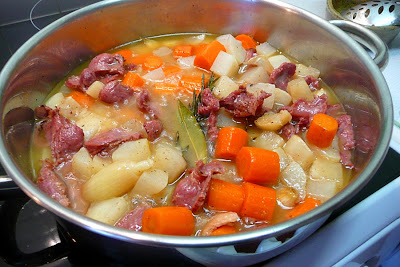 You can take the chicken pieces out and put them in
a warm oven toward the end so that the gizzards and
vegetables have a chance to brown a little in the duck fat.
Then I remembered a Jacque Pépin method for cooking duck pieces with root vegetables. It was on a TV series he did with Julia Child. We have the DVDs and the cookbook.

Jacques cuts up a duck and fries the pieces skin-side down in a pan until they render all their fat and the skin is browned. Ducks render a lot of fat, as you may know. Then he turns the duck pieces over and adds some whole, peeled shallots, some unpeeled garlic cloves, and a few chopped parsnips to the pan with herbs, salt and pepper. All of that cooks in the rendered duck fat until it's done, and then it gets removed from the pan with a slotted spoon so that the fat stays behind. 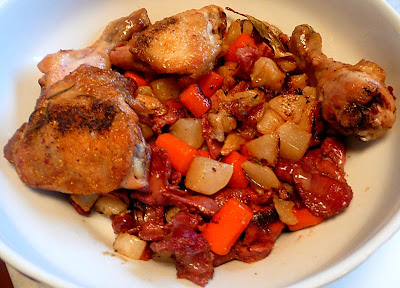 Chicken with gizzards and root vegetables.
I did the same thing, but using turnips, carrots, chicken pieces, and chicken gizzards. I used the duck fat from the gizzards and added some that I had in a little jar in the refrigerator. It was a very good lunch with red wine and French bread.
Posted by Ken Broadhurst at 09:13