Bonne Année
et
Happy New Year
to you all, from California and the rest of the U.S. West, where it is still 2007 as I type — to Alabama and Texas and North Carolina, not to mention Florida, Michigan, Virginia, Massachusetts, and some of the Canadian provinces, where you are probably sound asleep — and Paris and Rouen and Saint-Aignan, where the first day of 2008 has now dawned (under leaden skies). 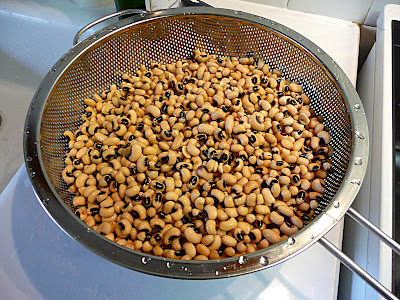 These black-eyed peas are for good luck throughout the year.
Of course, to get the full benefit you have to eat some of them today.
I was actually up at midnight for the second year in a row. Last year the reason was a party that I wrote about on this blog.

This year it was because at midnight there was a fire truck on the road out front, with all its lights flashing. Our neighbors across the street, the 70-something couple who live in Blois, let some of their grandchildren use the country house to hold a big New Year's Eve party. There was some noise, but not much. At least not until the pompiers arrived.

I heard the commotion and when I opened my eyes the display on the clock radio read 0:00. That is midnight on the 24-hour clock that is much used in France. I heard voices outdoors — not just talking, but shouting and laughter. I opened the clanky, creaky metal shutters on the bedroom window and leaned out. « Hé oh, I yelled, on essaie de dormir là. On ne dérange pas les voisins comme ça ! » You are disturbing the whole neighborhood. We're trying to sleep!

The three adolescents under my bedroom window laughed. « Il y a une fuite de gaz à la maison et les pompiers sont arrivés ! » There's a gas leak and the fire brigade is here. But we don't have piped-in gas in this village, I pointed out, so how can there be a gas leak?

For the kids, the proof that there was a real problem was that the fire truck was right there in the street with lights flashing. Never mind that the only reason the pompiers had come in the first place was that the kids themselves had called them out, and for no good reason.

That's how 2008 started at La Renaudière. At least it didn't start with a real bang!
Posted by Ken Broadhurst at 08:41