I always cook and eat black-eyed peas on New Year's Day. It's an old tradition where I come from. I grew up on what was once called "soul food" — maybe it still is in some places — and that means black-eyed peas, collard and turnip and mustard greens, corn-meal dumplings, salt pork (AKA streak o' lean, side meat, fatback), okra, fried chicken and other Southern foods. Since we lived on the coast, we also had stewed hard crabs, stewed and fried shrimp, baked flounder, and conch chowder. Not to mention clam chowder, made N.C. style without cream or tomatoes. 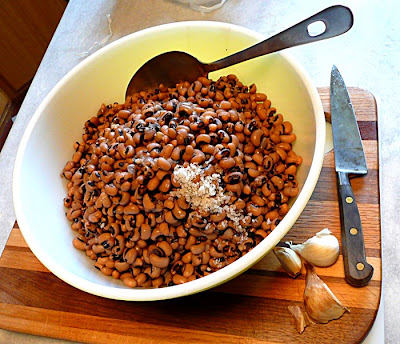 Soak and then cook a pound or two of black-eyed peas in a pot.
Don't salt them until they finish cooking, but flavor them as
you like with onion, garlic, carrot, pepper, and bay leaves
when you put them in the pot. Simmer for 3 hours and then
take the cooked beans out of the pot, reserving the liquid.
(That's some coarse salt on top that I'm going to stir in.)
Anyway, I've adapted the Southwestern French classic called cassoulet by making it with black-eyed peas for a New Year's Day feast. Down around the towns of Castelnaudary, Carcassone, and Toulouse, cassoulet is always made using big white beans called lingots (AKA cocos blancs). Those are really good — they cook up tender and what in French might be called fondant — they almost melt in your mouth. 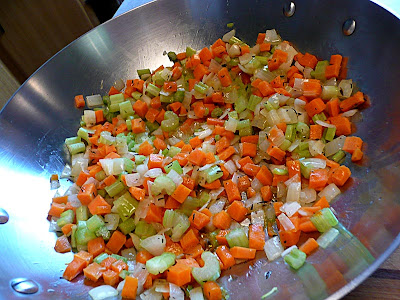 Cook some aromatic vegetables, including chopped carrots,
onions, and celery, in some duck or other fat, at low
temperature, until they are starting to get soft.
Black-eyed peas have a different flavor and maybe a less creamy texture. But what makes cassoulet cassoulet, I think, is duck and duck fat (or goose and goose fat, if you prefer). Without the duck or goose, it's just a pot of beans with meat. With duck or goose, it comes into its own. And some of the bird's fat is required for flavor. 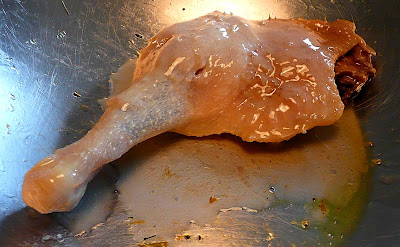 Buy some confit de canard, or cook some duck legs in
duck fat on low for two or three hours, until the meat
starts to fall off the bone. You need a deep pot and
enough fat to completely cover the duck legs. 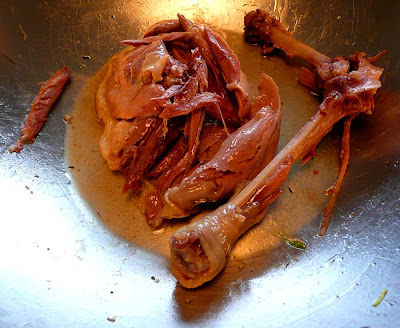 This is the duck that has fallen off the bone.
Another nice ingredient to have is a piece of pork rind (called couenne in French). You don't eat the rind, but cooking it with the beans gives good flavor and, especially, a good bit of gelatin to the cooking liquid, making it richer in texture as well as taste. I didn't have any this time, but I noticed that the cooking liquid from the peas was congealed after they cooled in it overnight. I think black-eyed peas produce their own gelatin. 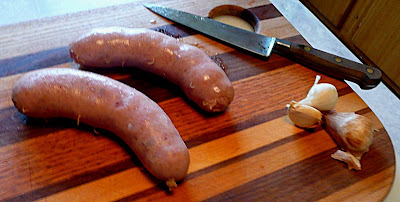 These are poached saucisses de Toulouse,
a plain pork sausage. For the cassoulet, sauté
a pound of tender lamb. Use shoulder or leg.
When the lamb is browned, pour on the reserved
bean liquid and let the lamb simmer in it for
30 minutes or until tender. Poach the pork sausages
for 15 minutes in the same liquid along with it. 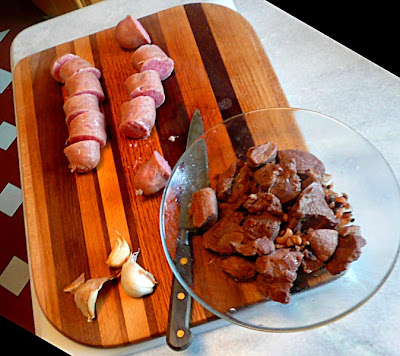 This is the braised lamb and the poached sausages.
Cut the sausages into chunks after they've
been poached, not before.
The term cassoulet actually derives from the name of the dish that the beans and meat are cooked in. It's called a cassole and is made of enameled terre cuite, or terra cotta as we call it in Italo-English. Cassole is a regional term, evidently, because it does not appear in the unabridged French dictionary of reference, the Grand Robert. The term cassole is obviously related to the English term casserole, itself borrowed from the French. 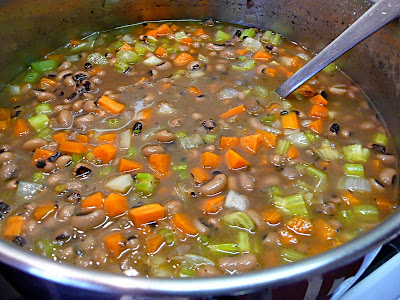 Put the black-eyed peas, the softened vegetables, the lamb,
and the sausage chunks back into the pot with the cooking
liquid and let it all come back up to the simmer.
Add salt to taste and cook gently for 15 minutes.
There are three styles of cassoulet, corresponding to the three cities that claim the recipe as their own. Some would say that the orginial, authentic cassoulet comes from the town of Castelnaudary (which means Châteauneuf-du-Roi is the local language). Castelnaudary was known in the past for the fine ducks and geese raised nearby. 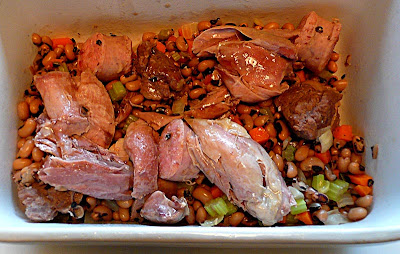 Spoon a layer of beans and meats into a deep baking dish
and layer some duck meat over it. Drizzle on some duck fat
and sprinkle on some chopped garlic for flavor.
A cassoulet toulousain contains the beans and the Toulouse sausages, of course. It also includes fresh mutton or lamb along with some confit of either duck or goose and some pork.

Finally, the cassoulet de Carcassonne doesn't contain any duck or goose at all. It's made with the same white beans and with mutton or lamb, maybe some partridge or other game bird, and the fat used to flavor the dish is lard (rendered pork fat). 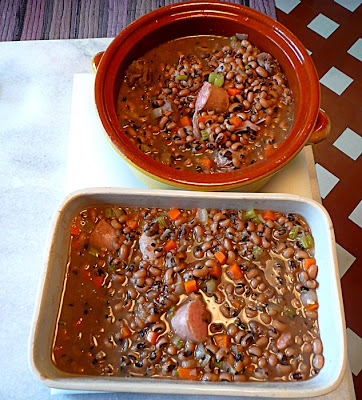 Spoon some more beans, lamb, and sausage over the layer
of duck meat. Add enough of the cooking liquid to moisten
the beans but don't put in too much. Put the pans into a hot oven
and let them cook for 30 minutes to thicken the liquid a little.

Here are a couple of links to more information about cassoulet:
The Saveurs du Monde article in French explains that there are as many recipes for cassoulet as there are cooks who make it. It's one of those recipes that's really a method or a technique, and you can interpret as you will according to the ingredients you have available to you. 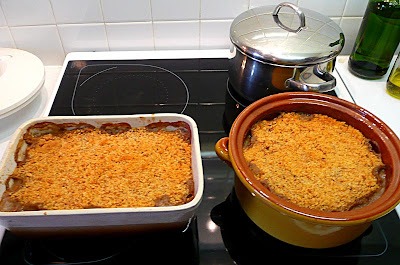 In a big bowl, moisten some bread crumbs with some duck fat or
cooking oil. Stir the crumbs around so that they are coated with
as much fat as you as you like. Then spread a layer over the
casseroles and put them back in the oven for a few minutes
until they are browned and bubbling. They are ready.
You can use dried beans and cook them yourself, or you can use canned beans. Some recipes include aromatic vegetables (onions, carrots, leeks), some include some tomato or tomato paste, and most include a good amount of garlic. As I said, some duck fat or, if you can't get that, some good lard, is needed to enrich the sauce the beans and meats bathe in. 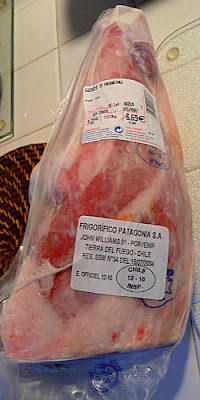 I used this frozen leg of lamb that I got at the supermarket.
It was lamb raised in Tierra del Fuego in Chile, and
the price was right for this application.
One difference between a simple "pot of beans" and a cassoulet is that the cassoulet finishes its cooking in the oven. It turns into a kind of casserole when you spread a layer of bread crumbs seasoned with some duck fat on top and let that brown.

In some cassoulet methods, it is written that the bread-crumb crust should be broken seven times before the cooking is done, with the crumbs stirred each time into the beans and a new layer of crumbs spread back on top. That certainly thickens the cooking liquid, but if you are not careful it will end up being too dry and pasty (not to say gloppy). I skip this step, preferring to have the beans and meats floating in a little liquid and a crusty layer of bread crumbs on top as a contrast.
Posted by Ken Broadhurst at 08:00