A week ago, I did succeed at least partially in getting a variety of oysters at the market for our New Year's Eve 2007 dinner. See Walt's blog for a review. 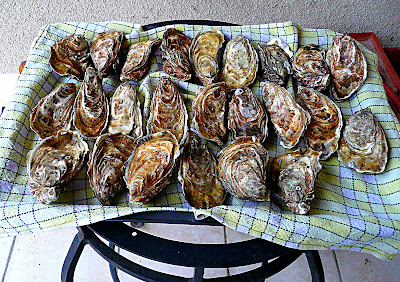 The 2007-08 "crop" of oysters
I didn't find any belons, which are the flat native French oyster. Did you know that all the oysters fished in French waters except the belons are actually a Japanese variety imported in the 1970s? The Japanese oysters are fat huîtres creuses — concave or "hollow" oysters — as opposed to the flat native French huîtres plates.

Most of the native French oysters were killed off by some kind of parasite early in the 20th century (even though they weren't completely wiped out). Then oysters from Portugal were imported and "planted" in French waters, but all those were in turn killed by some kind of disease in the 1960s and 1970s. So Japanese oysters were brought over and established along the French coast to replace the huîtres portugaises.

It was an example of globalization before the word was even invented.

I paid €10.00 for the two dozen oysters I got from the fish monger at the Saint-Aignan market. That's $15.00 U.S. at current exchange rates. They were beautiful, and delicious. Problem is, the guy mixed them all up so I didn't know which ones were the fines de claires and which ones were the spéciales. Or the pleine mer. So we just concentrated on eating and enjoying them instead of worrying about which oyster was which.

I'm happy to report that we ate them all and suffered no ill aftereffects this time. That dreaded tasteless, odorless, colorless bacteria that can live in oysters obviously was not present in these.
Posted by Ken Broadhurst at 08:57