As Sam and Claudia pointed out, the amount of rainfall an area gets isn't the whole answer. It's what I said about Rouen, too — it doesn't rain in excessive amounts there, it just rains lightly much of the time. 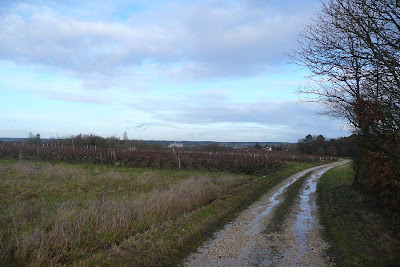 Do you think weather like this counts as sunny or cloudy?
So another climate measure the experts keep track of is annual hours of sunshine. It turns out that some of the rainiest cities are also some of the sunniest: Bordeaux, Montpellier, La Rochelle, Grenoble.

Here's a list from sunniest to dreariest, in hours of sunshine (heures d'ensoleillement) per year:

The southwest is definitely the land of sunshine: draw a line from Montpellier to La Rochelle and the cities south of it are the sunniest ones in France. And the northeast is the least sunny: Rouen, Metz, Strasbourg, and Lille win the cloudiest prize.

Tours (14th) is sunnier than Paris (17th), but Romorantin (21st) is drearier. So Saint-Aignan must be about tied with Paris, since we are halfway between Tours and Romo.

Or maybe Saint-Aignan has its own climate. There certainly are micro-climates in all countries and regions. Actually, La Renaudière, the hamlet we live in, has its own climate compared to the area down by the banks of the Cher River, one kilometer distant.

In 2003 — five years ago already — I was at La Renaudière one day at the beginning of February. While I poked around in this house we had decided to buy, measuring rooms to see if our San Francisco furniture would fit and thinking of all the possibilities, I had left the shutters closed. In one room it was too dark, though, so I opened up. It had started snowing! 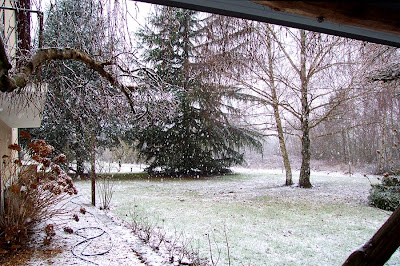 Snow at La Renaudière, February 2003
In just a few minutes, a good dusting of light snow had covered the ground. I thought, well, I'd better get going before the roads become impassable, especially the little lane that leads out of La Renaudière down a steep hill back to the main road along the river. I slipped and slid down the hill in a little Peugeot 205, and when I got to the bottom of the hill there was no snow at all. It was raining.

Often there is fog along the river but not up here on the edge of the vineyard. You can see the fog shrouding the river valley when you're out walking the dog in the morning. And I'm sure we get a lot more wind than spots down along the river, which are protected by the higher terrain all around them.

Meanwhile, we now keep our own rainfall statistics.

In 2005, we were in drought conditions — that's clear. But it's funny about 2006, which seemed like a basically dry, sunny year, and 2007, which was a gray, rainy, wash-out of a year. So much for rainfall statistics.
Posted by Ken Broadhurst at 08:12