Some days, that's what I think we ought to be doing. In a comment yesterday, Evelyn in Alabama said she thinks we here in Saint-Aignan get more rain in a week than they've had in a year. That's probably true, especially this year, with severe drought torturing the U.S. Southeast. 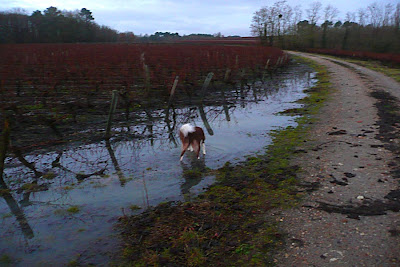 Callie still can't resist splashing in the puddles.
If we're not careful, she'll dive into the pond or one
of the waterholes that are scattered around the vineyard.
And I'll tell you what is true for us too, regarding rainfall: we got about as much on Saturday as fell over the course of the whole month of December, part of which was frigid and dry. After 38 mm — that's 1½" — of rain on Saturday, we hoped for a break in the clouds. There was a small one, and it lasted a good part of Sunday morning. 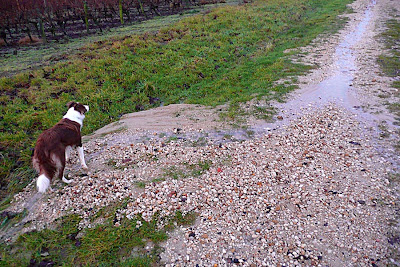 At certain points the gravel washed away to form
little deltas on and along the side of the road.
In the afternoon, however, the skies opened up again and another 15 mm of water collected in the rain gauge. That's six-tenths of an inch. So for the weekend, we had over two inches of precipitation. That's what we ought to get in an average month, and it all fell in the space of 36 hours. 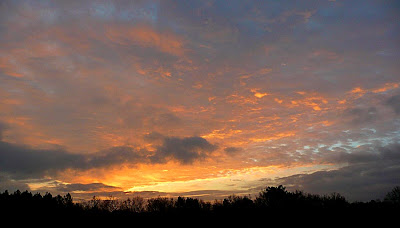 The sunrise looked all mottled when it started.
06 January 2008
The gravel road through the vineyard is in sad shape. Running rainwater washed ruts and gullies along parts of it, and in some places the gravel washed off the road and into the shallow ditches that parallel it. The road is a public right-of-way that is maintained by the village, and this spring there will be more work to do to patch it up than in past years. I won't be driving on it anytime soon. 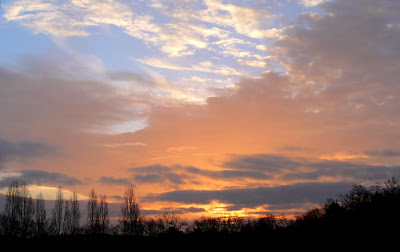 A minute of two later, the sunrise smoothed out,
taking on a different look.
06 January 2008
It does seem clear that our four-year drought is over. It started in 2003 with the great heat wave — la canicule — and produced four warm, dry summers in the Loire Valley. The summer of 2005 was especially nice — consistently warm and dry, but not too hot. It was a good year for the local wines.

Then 2007 brought us a chilly, wet summer overall but a month of warm sunny weather starting in late August, just in time for the grape harvest. Grapes that were plump from all the moisture that fell in June and July had time to ripen in warm sunshine and then be harvested fairly late. Ironically and despite early fears for the harvest, the local 2007s will probably be nice wines. 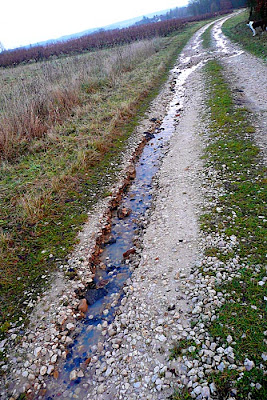 * * * * * *
A few days ago, I wrote about oysters and the importation of a Portuguese variety, the spoon-shaped oyster, into French waters a century or more ago. This morning on Télématin on France 2 TV, a commentator gave this version of the story:

A ship loaded with Portuguese oysters for the Parisian market back then was caught in a big storm on the Atlantic. It sought refuge in the bay at Arcachon, on the coast south of Bordeaux. The storm lashed the coast for several days. When it was over, the captain had to dump his cargo of Portuguese oysters in the ocean as he was sailing out, because they were beginning to rot and stink.

Of course some of the oysters survived and even thrived in the waters around Arcachon, which is today famous for fine oysters of the Portuguese, not native French, variety. That's how a new variety of the bivalve came to be fished and farmed in France.

That sounds like a nice legend to me. Pas vous ?
Posted by Ken Broadhurst at 07:57