To think there was a time in my life when I cursed the rising sun!

I lived in San Francisco. In hindsight, how anybody could be unhappy about seeing the bright sun in a town that is so gray and foggy is hard to explain. A San Francisco summer, at least in the neighborhood I lived in, meant 25 mph winds off the ocean carrying heavy, wind-driven fog and drizzle for much of the day, with temperatures around 15ºC/60ºF. Not exactly balmy. 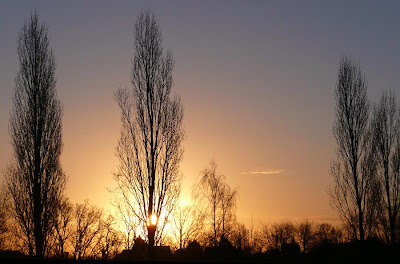 Sunrise
12 January 2008
I would be up early every morning, preparing for my drive down to Silicon Valley, where I worked. Often before daylight, I would back my car out of the garage, race down the hill, zoom onto the freeway, and speed south on Highway 101, the Bayshore Fwy., past Candlestick Park, cruising along the edge of San Francisco Bay, and then skirting the airport. 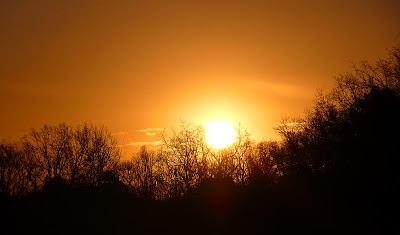 Sunrise
12 January 2008
Just as you cleared the airport, the southbound freeway turns slightly east, following the contour of the shoreline. And there it would be: the cursed sun. Right in your face. Low on the horizon. Bright and blinding.

That was the problem. Traffic would grind to a halt. All four or five lanes of it. Brake lights for miles. People sitting in their cars trying to read the newspaper, singing along with the radio, shaving or putting on makeup, eating breakfast, or just fuming. I was a fumer, I guess. I had left home before dawn hoping to beat the traffic, and there I was stuck in it. Who knew for how long? 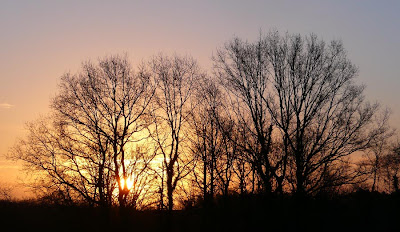 Sunrise
12 January 2008
On really bad mornings, traffic would be backed up for a mile or two before you even got to what I'll call Sunrise Curve. At that point, you had a choice. You could turn off on Hwy 380, cut over to I-280, and head south on that. Hoping you wouldn't come face to face with the sun somewhere along that freeway. Or run into some other kind of traffic clog.

But often the blinding sun would take you by surprise, if you left home as early as I did. There didn't even have to be much traffic for the grinding halt to delay you for 30 minutes or more. And you were in a hurry. Time was of the essence. Time was money. You had a meeting to attend, or a report to finish before mid-morning. You just wanted to GET THERE. 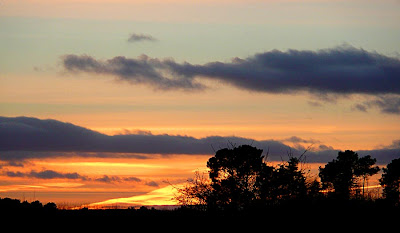 Sunset
12 January 2008
I hated the sun on those days. Isn't there something fundamentally wrong with that?
Posted by Ken Broadhurst at 07:31