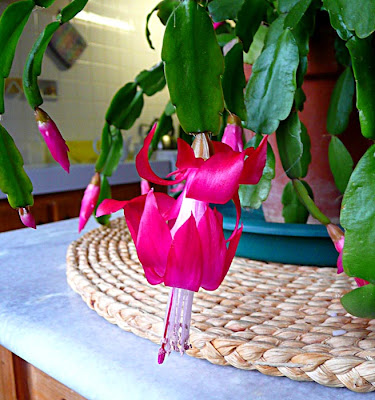 Did your Christmas cactus bloom at Christmas this year? In past years, mine have bloomed in November and in January. For some reason, this year they chose to produce buds during Christmas week. The flowers are about at their peak right now. 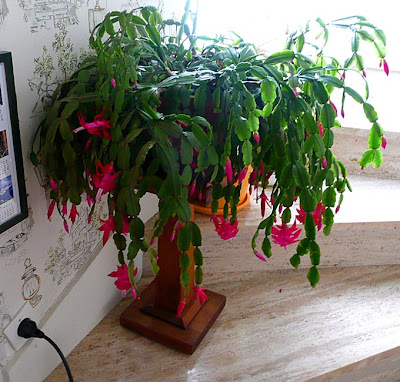 I was keeping the plants out on my little sun porch, so I didn't provoke the blooms by putting them in a dark place for a few weeks, as they say you can do. Of course, our weather has been so rainy and foggy, and the days are so short, that maybe the so-called sun porch was the meteorological and astronomical equivalent of a dark closet this year. 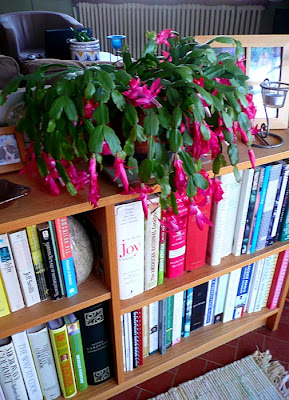 When the buds started appearing, I brought both of the plants into the house so that we could enjoy them. The one on the bookcase is one I potted up using cuttings from the bigger one on the plant stand on the stairs. That one was here in the house when we arrived in 2003, and all I've done is to water it from time to time. And take some cuttings. I haven't even repotted it. 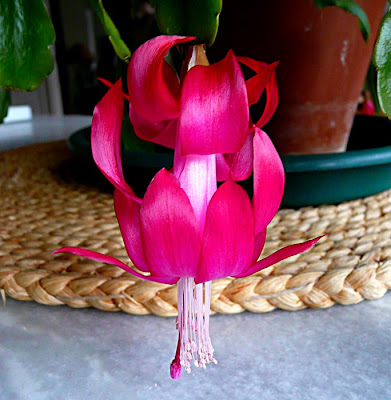 The Christmas cactus is also called that in French — le cactus de Noël. Similar varieties are known as Easter or Lenten cactuses. There are two families of them, the Rhipsalidopsis and the Schlumbergera. My Larousse Guide to House Plants, by Alan Titschmarsh, says they are native to the Americas.
You can tell from these pictures that we had a sunny day yesterday. No complaints about that.
Posted by Ken Broadhurst at 07:54