When I arrived in France in June 2003, I rented cars for the first couple of months. I had an Opel Zafira, a sort of minivan, which I picked up at Charles de Gaulle airport on arrival. Opel is a German brand and is owned by General Motors. I had an Opel back in the 1970s, which I lived in Champaign-Urbana. They were sold by Buick dealers in the U.S. back then. 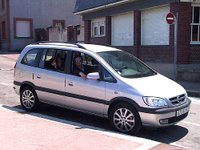 I needed a minivan when I arrived in France because there were two of us, and as you can imagine, we had quite a bit of luggage with us. We also had our dog Collette in her kennel. We couldn’t have fit all that into a smaller car. The Zafira was nice -- spacious, peppy, air-conditioned -- but it was fairly expensive. After we arrived in Saint-Aignan, I realized we didn’t need the van any more. I called Hertz in Paris and they said I could come to the city and turn the van in for a smaller, less expensive model. It was a good excuse to drive to Paris and back.

We ended up with an Opel Corsa. It’s a pretty small car, but it had a diesel engine. I liked that because diesel fuel is cheaper than gasoline, and a diesel gets much better mileage than a gasoline engine. So you win on two fronts.

When I turned the Open minivan in in Paris, the procedure was that I dropped it off in an underground parking lot and then walked about 10 minutes up to the rental office to turn in the papers. There the clerk gave me the paperwork and keys for the smaller car and I walked the 10 minutes back to the parking garage to get the car.

2003 was the summer of the great heatwave (la canicule, or dog days) in France. The temperature was in the 90s, and often the upper 90s, for weeks on end. It was already very hot that June day when I drove to Paris. So I asked the Hertz clerk, just to be sure, whether the Corsa were we getting was air-conditioned. After hesitating for a second, he said yes, it was. He lied.

We walked back down the street to the parking garage, got in the car, and started driving out of the city. We pushed a lot of buttons on the dashboard to get the AC going. We were getting some cool air, we thought.

But by the time we were 10 miles out of the city, we realized there was no AC, just a fan. Should we turn around and go back to try to get a different car? No, I said, it never stays really hot in France for very long. And we don’t plan to do much driving anyway -- just trips to the stores as we settle in. And we planned to buy a car as soon as possible anyway.

Was I wrong or what? First, the weather never seemed to cool down. 90, 95, even 98 degrees became the norm through July. I went to a Citroën dealership near Saint-Aignan in July and asked about buying a new car. (I have wanted to own a Citroën for years, just because...) The salesman explained that he would have to order me a car from the factory. And because it was summer vacation, he couldn’t guarantee delivery before mid-October, at the earliest -- the factory shuts down for the month of August. That was discouraging. The rental car was costing about a thousand dollars a month.

A few days later, I was driving past Saint-Aignan’s Peugeot dealership, the Garage Danger. Yes, Danger -- Mr. Danger is the owner. There on the lot was a light-blue Peugeot 206, used but new-looking. I could probably buy it right off the lot. I thought it over and decided to go talk to Mr. Danger. He named his price. I said OK and returned home. The next day I called him and said I wanted the car but the price was too high. He knocked off a thousand euros ($1200 or so) and I said great, I’ll take it.

But first I had to get the money transferred from the U.S. That took a good week. And then Mr. Danger had to get the car ready, including getting it registered in my name with the proper authorities up in Blois, the capital city of our département. By the time all that took place, it was August 8, if I remember. And it was still as hot as blazes outside. 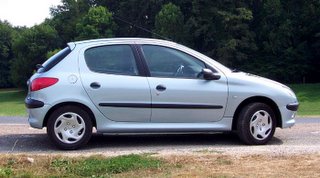 I’ll never forget the day we got the Peugeot. We had been suffering in the heat in our un-air-conditioned house. It would be 85º outside and inside when we got up in the morning, and 95º outside and close to 90º inside in the afternoon, and it was miserable. After eight years living in San Francisco, we had longed for some hot summer weather, but this was too much. The Peugot has AC!

That hot August day, I said that it was a good day to go for a ride. We put Collette in the car and headed out into the countryside with the AC on full blast, and spent the afternoon blissfully. The car’s thermometer said it was 40ºC outside that day -- it always reads a little hotter than the actual temperature when it’s sunny outside. 40ºc is 104ºF, by the way. We were in heaven in our air-conditioned Peugeot 206. 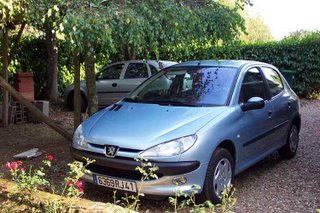 A couple of days later, we had another excuse to go to Paris: we had to turn the Opel Corsa in. I drove up in the Peugeot (with the AC on full blast again) and poor Walt drove up in the no-AC Corsa. Collette rode with me. But all three of us got to ride back in the cool Peugeot.

The Peugeot 206, a 2001 model, actually has what they call automatic AC. On the display, you just set the interior temperature you want and the AC does its job. Very nice. It also has automatic windshield wipers. There’s a rain sensor built into the middle of the windshield, so when it rains the wipers start working. They swipe across the glass intemittently as required by the amount of rain hitting the windshield, and they work great.

The 206 is a very small hatchback car with four doors. The back seat is small but OK, and the front seats are comfortable. It has a 5-speed manual transmission -- only a small percentage (somewhere I read 6%, I think) of the cars sold in France even now have automatic transmissions. Personally, I’ve always driven a stick shift.

And the 206 has a big engine for such a small car. How small is the car? It’s 23 inches shorter than a Toyota Corolla, and 35 inches shorter than a Honda Accord. The engine is a two-liter, 90-horsepower, four-cylinder, sixteen-valve, fuel-injected, turbo-powered diesel. It has plenty of pickup and develops a lot of torque for going up hills.

So two years later, what do I think about the Peugeot? What are French cars really like? Are they comfortable? Reliable? Fun to drive? Economical?

The one thing the Peugeot doesn’t have that I would really like is cruise control (un régulateur de vitesse in French). I have a heavy foot, so I have to be careful. The car will cruise nicely at 80 mph or even 90 mph, but speed limits in France are strictly enforced now. On two-lane highways the limit is 55 mph, on four-lane roads it’s 65, and on the autoroute it’s 80 mph or so (130 kph).

Some of the other good features of the Peugeot are headline-aiming -- you can adjust the headlight beam up or down to adapt to the load you are carrying or to traffic conditions. It also has removable rear seat cushions, so the rear seat backs can fold down pretty flat and give you a lot of cargo or dog room when you have only two passengers. 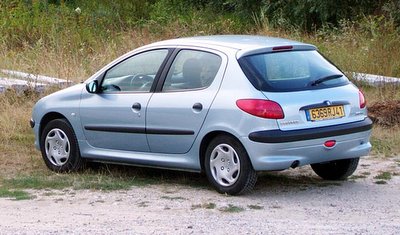