So while our friends were here in late October, we drove over to Chinon to see the town and taste the wines. Chinon is about 100 km/60 miles west of Saint-Aignan, on the other side of the city of Tours.

The town of Chinon and its château have played a significant role in French history. Here's a link to what Wikipedia says about it. The summary is that Henry Plantagenêt was the owner in the 12th century. His wife was Eleanor of Aquitaine, and one of his sons was Richard the Lion-Hearted. Henry and Richard both became kings of England. A couple of centuries later, Joan of Arc made the trip to Chinon and recognized the boy named Charles who was rightfully king of France. She convinced him to claim the throne. She ended up being burned at the stake by the English in Rouen in about 1430.

These days, the château is in ruins, but it's pretty very impressive.

Click on the image to see an enlargement.
We arrived in Chinon and we were hungry -- it was 3:00 in the afternoon and we hadn't had lunch. This doesn't seem like a big problem, I guess, unless you have ever wanted to eat something in France outside the regular meal hours of noon to 2:00 and 7:00 to 10:00 in the evening. It's not easy.

We headed for a restaurant where Walt and I had eaten a few years earlier. We remembered sitting outside at a table on the sidewalk in front of a little café. There was a customer with a fat beagle dog he called Gaston or Gaspard or something like that. The beagle had the run of the place. 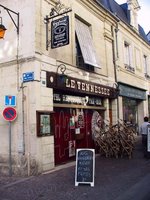 So we headed down the street the café was on. Turned out it had changed completely and become a 'burger joint, French-style. Besides, it was closed.

There was a crêperie just down the street. We had passed it and it looked good, but we weren't sure it was open. We went back and I asked if we could get something to eat. "Crêpes dessert seulement," the woman said. We didn't want dessert -- we wanted a sandwich or a quiche or a salad.

We looked at a couple of restaurants but we didn't want a multi-course meal. They probably wouldn't have served us anyway. Then we found a café-tabac that looked promising. No sandwiches, no food, the man behind the bar told me. But you can go get a sandwich to go at the boulangerie down the street. Finally, we thought. "Can we bring it back to eat it here and get something to drink?" I asked. "Certainement", he said with a smile.

The woman at the boulangerie was all smiles too, but she had no sandwiches. Sold out, she said. "J'ai tout vendu à midi." Could she make a sandwich with one of the dozens of bagettes she had standing up in the racks behind the counter? "Non, monsieur," she politely replied. The bread is fresh out of the oven and is too warm. If I put butter or cheese on it, it would just melt. I guess that doesn't sound good to a French person. Besides, I've always been told in France that warm bread is indigestible. You have to let it cool before it's good to eat.

Defeated, we headed for a café where people were sitting at tables outside. Nobody was eating anything. We went inside to ask about food, and found a table. But the place was spare and messy, and there was no food, and no waiter, in sight. We got up and left.

Walt had one more idea. There's a big café just down the street near the river. We walked over there, and there were a lot of people sitting at tables outside. I'm not sure anybody was eating anything though. We went in anyway. There was a young woman who obviously waited tables. Can we get something to eat? I asked. A sandwich? "Non, monsieur," we ran out of bread at noontime. We can't make sandwiches. The only thing I can suggest is a croque-monsieur.

Now in my book, a croque-monsieur is a sandwich. But it doesn't qualify as a sandwich in France, where the term is pretty much reserved, at least in cafés, for something that is half a baguette with some pâté, cheese, or ham on it. Nothing else. A fancy sandwich is a baguette that has a slice of ham and a slice of cheese on it. A croque-monsieur is what we would call a toasted ham and cheese sandwich in America. And it is, or can be, delicious. We ordered four of them, with four beers. 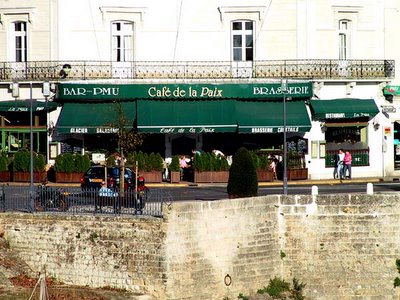 The restaurant tables hadn't yet been cleared of lunch dishes. We found the one that was ready and sat down. The croques came out pretty fast, along with the glasses of beer, and it was all delicious. Perfect. Our hunger was satisfied, and we were ready to go take some more pictures and taste some more wine. Here is a picture of the café that rescued us.