Thanksgiving day was gray and chilly in the Loire Valley. There was talk of snow. We left here at about 5:00 p.m. to do the hour-long drive up to Susan's house in Blois. It started raining. The temperature actually rose three or four degrees during the evening. 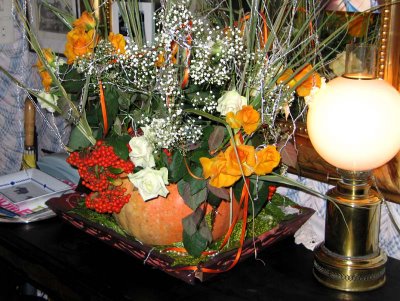 Gisèle made a flower arrangement in a pumpkin for the occasion.


By 7:30, we were all there. Susan's daughter Flavie had driven in from Paris, where she works. Flavie's husband Olivier drove in from Geneva (6 hours on the road), where he works. Rebecca, an American who lives near Blois, picked up Debbie, and American who is teaching in Blois this year on a Fulbright fellowship, and gave her a ride to Susan's for the evening. Gisèle and Jean-Luc drove up from Saint-Aignan, and Maryvonne and Bernard, who live in Blois but have the country house across the street from us, were there too. We were 11 in all. Remember, Thanksgiving is not a holiday in France. Susan had the idea of organizing the dinner for our French friends, and Walt, Rebecca, and I volunteered to help by preparing typically American dishes for the meal. 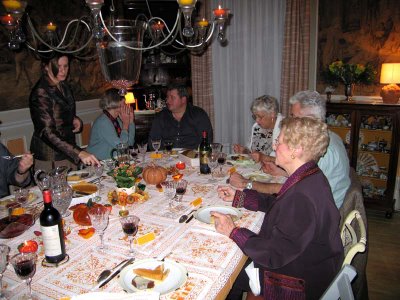 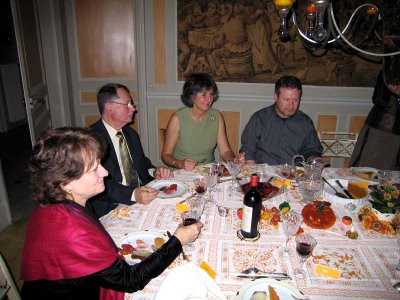 
Susan had bought a turkey from a farmer in the town of Montoire-sur-le-Loir, about 30 miles north of Blois. Turkeys are not easy to find before December in France. It was about 15 pounds, and of course was in the oven when we arrived. 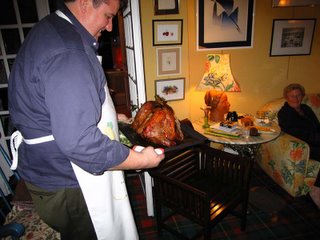 I wanted to take pictures of all the food spread out on the table, but it wasn't served that way. Instead, Olivier "presented" the bird to the guests as we were having pre-dinner drinks (apéritifs) in the sitting room. He brought it into the room on a platter and we all oohed and aahed. Then he took it back into the kitchen to carve it. I was able to snap a picture. We all took our places around the dining room table and Olivier, Susan, and Flavie started bringing in the food and serving up. Each one would bring around a dish -- my cornbread stuffing muffins, for example, and then the carved turkey, and then some vegetables. Only the cranberry relish and the collard greens were actually on the table, to be passed around by the guests themselves. Olivier brought around the turkey, holding the platter for us as we served ourselves a piece or two. 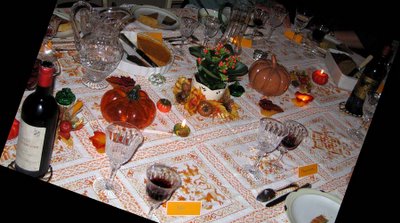 There was a centerpiece of ceramic and glass pumpkins, a kalanchoe plant, and several candles in the middle of the table. Also visible, what's left of the pumpkin pie.


The turkey was good, and Susan had made a chicken-liver-and-sausage stuffing for it. My cornbread stuffing seemed to go over well. Everybody except Jean-Luc tried the cranberry relish; he refused it. Maryvonne asked Walt if he ever thought of cooking it! Most people tried the collard greens, but I noticed that Debbie didn't eat hers (she was sitting next to me). The only person who commented was Gisèle, who said she like the greens because they were croquants, which translates as crunchy or crispy. In other words, they were not mushy, and I guess that was good.

Susan had made a sweet potato puree, and Rebecca had cooked Brussels sprouts and chestnuts. For dessert, Walt had made a pumpkin pie. Only Bernard refused to try it -- we knew he didn't eat pumpkin or winter squash, so that wasn't a surprise. Maryvonne tried the pie, and she pronounced it edible, if not really to her liking. She said pointedly of the spice cake Susan had made: "Alors le gâteau de Susan, ça c'est bon!" Rebecca had made a fruit salad of orange sections in a red-wine-and-lemon-juice syrup, and that was very good too.

Oh, and the wines. There were four bottles of 1990 Bordeaux and St-Emilion red wines from Susan's cellar. I wish I had had more time and presence of mind to pay attention to them. All I can say is that the two I tried were good. Flavie kept saying she was so happy to finally taste a real American Thanksgiving dinner, with all the right flavors.

And it's true, the turkey was right, the cornbread stuffing was good, and the pumpkin pie was perfect. Gisèle kept saying everything was just delicious, and Susan was beaming all evening. She really enjoyed the dinner, I could tell. After dinner, we had coffee and Olivier offered to make up a doggie bag (he said "well, a human bag") for anyone who wanted to take some food home. Most people took some, especially the Americans. Our friend Luke was arriving on Friday and we figured he would like some Thanksgiving food. There were three or four pieces of turkey, some pieces of the two stuffings, and some sweet potato puree, plus some greens, in our doggie bag. On Friday night, that's what we ate, and it was good again.
Posted by Ken Broadhurst at 10:17