This first week of November is also the week following the visit of two good friends from California, Candy & John. The activity level around here has dropped off considerably, and the weather has turned showery and cooler. Since September 1, life here has been very mouvementé as we say in French. Walt spent three weeks in America. We had four sets of company in September, including my mother for three weeks. We picked and processed a ton of vegetables from the garden for freezing and canning.

Our friends C & J were very lucky. They brought great weather with them. The whole week was warm and sunny, with record high temperatures (mid-70s F, 22-25ºC). 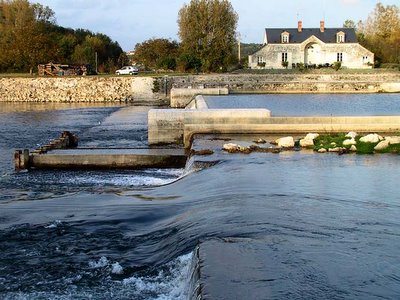 So what did we do? We took it pretty easy. C & J were visiting for the fourth time in two years, so they had already seen the main sights: the chateaus of Chenonceau, Chambord, and Valençay, as well as the towns of Loches — just 20 minutes from here ;^) — and Amboise. When they arrived from Paris this time, on a Monday afternoon, I had cooked a duck (see an earlier topic). We had dinner and stayed up late.

The picture above is the lock-keeper's house and the spillway on the Cher river near Mareuil-sur-Cher. You can see how beautiful the weather was. The pictures below show the Cher between Saint-Aignan and Mareuil. 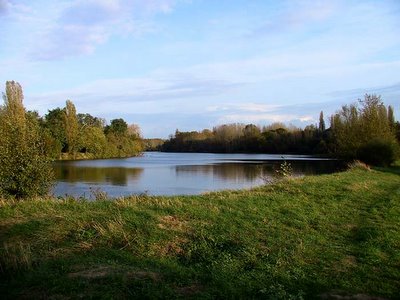 On Tuesday, we spent most of the day in the house. Walt went up to the bakery in the vineyards, the one with wood-fired ovens, and got some good bread and croissants. At noontime, after a leisurely French-style breakfast, John and I drove up to the local SuperU supermarket and bought cheese for the afternoon meal. We got Saint-Agur blue cheese, Bleu de Bresse, Cantal, Mimolette, Camembert, and a local goat cheese called a Sainte-Maure. We had plenty of red wine (the day before, Walt had bought ten liters of gamay red from the Domaine du Chapitre, just up the road in Saint-Romain-sur-Cher). We spent the afternoon grazing and then drove down to the river and took a nice walk with the dog along its banks. 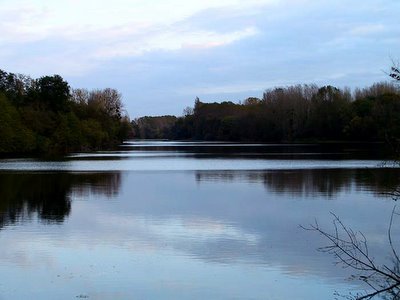 Tuesday night I heated up a couple of dishes of eggplant parmesan that I had made on Sunday using eggplants and tomatoes from our garden.

By the way, a great way to make eggplant parmesan is to steam whole eggplants until they are soft. Then cut them into slices and put a little bit of olive oil on them. That way, you can really control the amount of oil in the dish. You can use either fresh sliced tomatoes or tomato sauce along with mozzarella and parmesan cheese in layers to make the dish. Finish with a layer of mozzarella and brown it all in the oven until it bubbles up around the side of the dish.

On Wednesday, we got up and got ourselves ready before noon so that we could go have lunch in a restaurant in Saint-Aignan. Le Crêpiot is the name of the restaurant — it's a small but colorful place on the main street that serves steaks and fries, crêpes, and salads. It's popular so I made a reservation, and it's a good thing I did. The place was packed when we got there at 1:00 p.m. We had decided to have steaks and fries (steak-frites), which is pretty much the French national dish.

As I said, the restaurant was crowded. The last part of October is vacation-time for the schools — it's the Toussaint or All Saints Day holiday — and there were quite a few children in the restaurant, which is rare. They were well behaved, and it was a nice atmosphere. We ended up having the restaurant's daily special, which was pork tenderloin served with flageolet beans. We ordered frites on the side — the reason we wanted to go to the Crêpiot in the first place was to have frites. Everything was good. The wine was a local Gamay.

After lunch, we spent an hour walking around Saint-Aignan. Again, the weather was warm and sunny — it felt like spring — and there was a lot of activity around the town. We walked down on the quai by the Cher, and then up to the château for the view out over the river valley.

We had an appointment to visit the Clos Roche Blanche winery in Mareuil-sur-Cher, just about 5 miles downriver from Saint-Aignan, later in the afternoon. We took a little drive in the country and arrived at the winery at 5:00 p.m. C. & J. had read a blurb in a California wine importer's newsletter that recommended the Clos Roche Blanche's Cabernet Sauvignon white and Gamay red wines as excellent wines at good prices.

The Clos Roche Blanche grows its grapes organically and practices biodiversity in the vineyards. In other words, Catherine and Didier, the owners, let native plants (a.k.a. weeds) grow between the rows of grape vines. Insects don't become a problem because they have all those weeds to live and feed on — they leave the vines and grapes alone.

Catherine and Didier live in a big stone house high up on a bluff overlooking the Cher river valley. It's an impressive site, though Catherine said the house is not very discrète. In other words, you can see it for miles around. Her grandfather built it, and he also had a cave built by tunneling into the limestone cliff behind the house. It's pretty impressive -- it's dark and moldy but clean and well-kept, with wooden, stainless-steel, and even concrete vats and tanks in which the wines ferment and age.

The 2003 Clos Roche Blanche Sauvignon Blanc is amazingly rich and liquorous. It makes a good sipping wine for apéritifs. The 2004 is completely different, but also delicious. It's a good wine to drink with food -- dry and fruity at the same time. The 2004 Gamay red is also very fine. It's got more body than many Gamay red wines, and more tannin. It's dry and can stand up to red meats and spicy food. Walt and I had tried it before, in a local restaurant, and we knew already that Clos Roche Blanche made great wines. Here's a link to a web site about the winery.

We bought three bottles of the Gamay and two of the 2004 Sauvignon Blanc. When I told Catherine that I didn't have much cash, but that I wanted to buy a couple fo bottles, she said it was OK, I could just send her a check later. She had opened a bottle of the 2003 Sauvignon just for us to taste it, so she gave it to us to take home. "Have it as your apéritif this evening," she said. We did. Then we had a dinner of cheese, pâté, and salad — and Clos Roche Blanche Gamay red wine.

After the wine tasting, we drove up a gravel road to see the vineyards. We saw a beautiful pheasant down one row of vines. 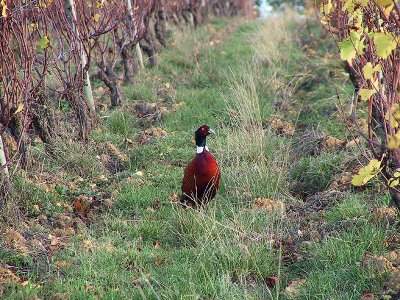