Finishing up my account of our trip to Chinon in late October, I want to mention two more wineries that we think make very good red wines. One is a place we have been to three or four times now, the Château de Ligré in the village of Ligré on the south side of the Indre river 5 or so miles southeast of Chinon itself. Here's a site in French.

Ligré has a modern tasting room run by a very vivacious and talkative woman that we like. We have bought some bottles there before, but normally we buy the wine in bulk. We have our own little plastic barrels that they fill up for us. The 2004 red is very good -- fruity but with good body and fairly dry. The woman who runs the tasting room always calls on an employee to take us down into the cellar, where she fills our 10-litre jugs using what looks a little like the hose and spout you use to fill your car with gas at the service station.

The employee is a wiry little woman in her 50s, I imagine. She is also very friendly and talkative. We chat about the weather and the grapes, and once she told us that she has been an employee and resident at the château since she was young girl. I got the impression she was raised by the older woman who still lives part-time in the château, and who she called la grand-mère, the grandmother. Thanks to Candy and John, here's a picture of her and us tasting the wine. 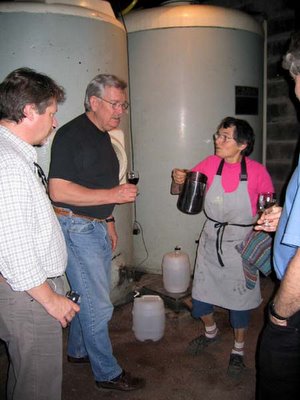 You can see our white plastic jugs, not yet filled. When we buy 20 litres, we have the equivalent of 26 bottles of good red Chinon for about three euros a bottle. We bottle it ouselves, at home. Here's a picture of Walt bottling this batch a day or two later, down in our "cellar". 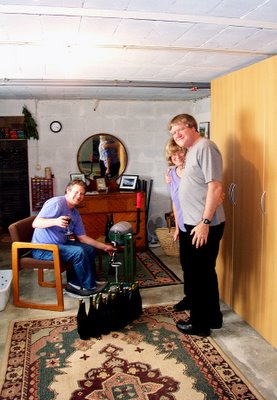 Our last wine stop of the day was at a place that we hadn't visited before but that came highly recommended. It's Charles Joguet in the village of Sazilly, just a few miles from Ligré. We were lucky to have one of the winery's owners, Alain Delaunay, host a tasting for us. Mr. Delaunay speaks English and has traveled to California -- Kermit Lynch of Berkeley is his importer -- so we were able to ask him a lot of questions about the language of wine and the process of wine-making. It was a very nice session, and the wines were fabulous. We tasted the 2003s, at least 6 of them. We saved the 2004s for a future visit. The 2003s are especially good, I think, because the weather that year was so hot and dry. The 2003 Chinons resemble California wines, I think -- they are much fruitier and more alcoholic than Chinon reds normally are.

On the way back home that night, we stopped in a SuperU supermarket in the town called L'Ile-Bouchard. We bought chicken thighs and fresh vegetables, and a baguette, and we drove the hour or so back to Saint-Aignan. We cooked dinner and had a nice meal with good Charles Joguet 2003 Chinon red and some cheese. Here's a picture of some of the cheeses we had that week, including Epoisses, Neufchâtel, chèvre, tomme de Savoie, Sainte-Maure, bleu de Bresse, mimolette, and of course camembert. 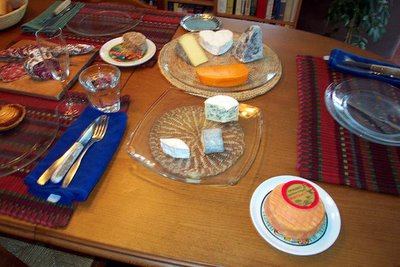