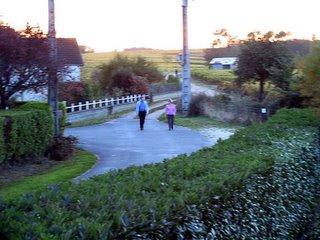 Wednesday evening, after the Clos Roche Blanche winery visit, John and Candy took a walk in the vineyard out behind our house. Here they are returning after the walk. After a Tuesday and Wednesday close to home, we decided to go to Chinon on Thursday. That's about a 90-minute drive from Saint-Aignan. The attraction: wine, of course — Chinon reds are the top of the top in the Loire Valley — along with beautiful countryside and an impressive château. We had an early lunch and set out at about 1:00. 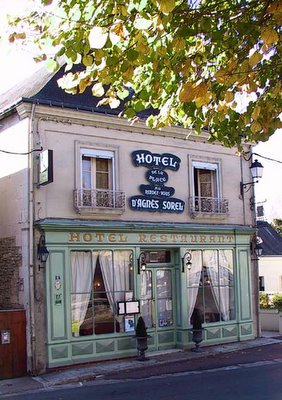 Our first stop was in the village called Genillé, about 15 minutes from Saint-Aignan. There's a restaurant there called the Agnès Sorel (the first woman to be more or less officially the king's mistress in France — she died in 1440 or so) and we planned to have dinner there Friday night. We stopped to make a reservation. Here's a picture of the restaurant, which turned out to be excellent.

Our first stop in the Chinon wine area was at the Domaine de Beauséjour winery. Walt and I had stopped here before, and we used to buy the Beauséjour wines in San Francisco. This time, the young woman who hosted the tasting remembered us. We tried three or four reds, including a couple with the label Angelot that are barrel aged. Most Loire wines don't spend any time on oak, and I thought the Angelots were good.

Beauséjour is an old, low, stone building that sits up on the heights overlooking the Indre river valley. It has great views. 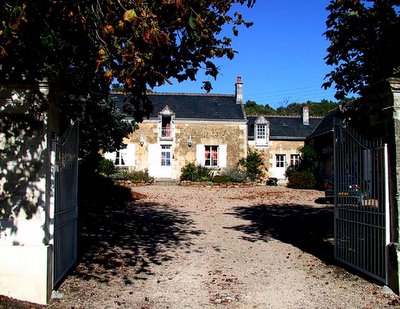 Here's the view from the front gate: a "front yard" of vines, then the river valley stretching out into the distance. 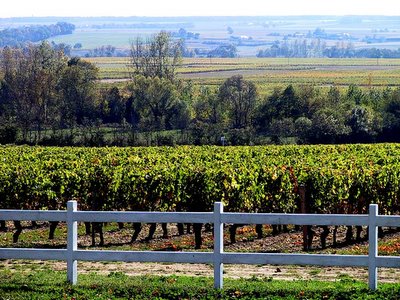 After Beauséjour, we drove the 5 or so miles into Chinon itself. About that, more later. One thing we did there was visit an old wine cave called Monplaisir, which is run by a group of three wine producers.

We were underwhelmed by the wines. The only good one was the first one we tried, which was also the youngest (a 2004 for €5.30). It was almost comical, because the woman behind the tasting bar kept pouring us older and older Chinons and telling us how much better they would be. We tried a 2002, a 2001, and then a 1998. Each one was worse than the last. We were polite, and bought a bottle of the 2004. Obviously, Monplaisir is a tourist trap.

But it's a very interesting tourist trap. You can wander around in extensive caves and tunnels that have been dug into the side of a cliff face on the riverfront. 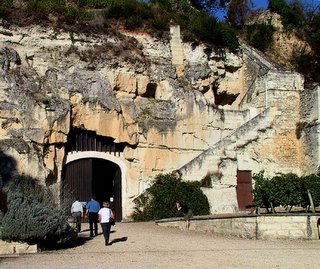 There are hundreds of barrels and thousands of bottles of wine stored in there, all covered in thick mold. It's kind of creepy, but impressive.

Chinon wine, by the way, is a red made from Cabernet Franc grapes almost exclusively. Much Chinon wine is meant to be consumed young, and often the wine is served chilled. Other Chinons are "keepers" -- the bottles can be cellared for 5 to 10 years or even longer, and the wine gets better and better. 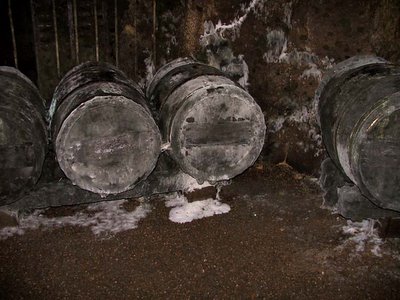