Collette, our dog, hasn't been feeling well for more than a week now. Over the last few days, I've come to realize she's been having the same symptoms off and on for nearly six months.

Back in June, she had a very bad week. She stopped eating and then she stopped wanting to go for a walk. Before she just refused to go out with either of us, she began walking very very slowly, with her head hanging low. On June 25, our neighbors had a big, all-day party. At one point, late in the afternoon, we went and let Collette out so she could come see what was going on. She wandered around the neighbors' yard in a daze, eyes glazed over. A friend who was there later told us she thought Collette was a zombie that day.

We took her to the vet, who did blood tests but didn't find anything unusual. He diagnosed arthritis and treated her for that, and he said the really hot weather we were having right then might be a factor. 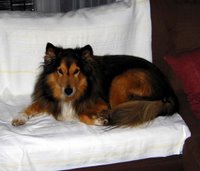 Now I should point out that Collette is 14 years old. We got her from the Humane Society in Santa Clara, California, in July of 1992. She was about 6 months old then, according to the vet we took her to see after we adopted her. If you use the 1 dog year = 7 human years formula, that makes her 98 years old. She moved to France, which meant flying in the baggage compartment of an airplane, in a cage, when she was 12, or 84. She's no spring chicken. But she doesn't look her age at all. And she has enjoyed the freedom of living in the country for these past two years, after living the city life in San Francisco and Sunnyvale for all that time.

It's of course very sad to see Collette in decline. About 10 days ago, she was out for a morning walk with Walt. About half-way into the 2-mile walk, she suddenly began walking really slowly, as she had in June. Her eyes seemed to become opaque.

Collette and Walt walked on back to the house, at a very slow pace. I was upstairs in the kitchen when I heard the door open and close downstairs. Then I heard Collette yelp -- almost a shriek, really. When they came upstairs, I asked Walt if he had accidentally stepped on the dog's paw or something. He said no, he was just drying her off with a towel when she yelped. He had touched her belly.

Collette had come upstairs under her own power. She ate her breakfast of rice and beef as usual. But then, instead of going and lying down as she usually does, she just stood around with her head hanging down. She tried to lie down a couple of times, but she couldn't. She would sit and then start to ease herself down by moving her front paws forward one at a time. About three quarters of the way down, she would change her mind and stand back up. She was obviously in pain.

We started to examine her. Every time we touched her belly, she would shriek with pain. Maybe I'm exaggerating, but not much. I called the vet and his receptionist said he could see her in about 90 minutes -- he was in surgery.

We couldn't leave Collette standing the way she was, so Walt managed to get her down on her side on a rug on the floor. He lay down beside her and kept her comfortable while I went out and took the back seat cushions out of the car and folded the seat backs down to make a flat platform. We put down a thick blanket all folded up to make a soft surface. Then we carefully lifted Collette into the back of the car and got her down on her side again.

We drove slowly over to the vet's office, three miles from the house. We got Collette out of the car and she walked into the waiting room on her own. She stood there for about 10 minutes while we waited for the vet to see us. When he called us in, Walt carefully lifted Collette up onto the examining table. The vet touched her abdomen and she moaned. He said he wanted to do an x-ray.

The x-ray didn't show anything out of the ordinary. We looked at it and could see Collette's stomach, small and large intestines, and spleen. There were poops in her large intestine waiting to come out. All was normal.

The vet gave Collette two shots -- an anti-spasmodic and a pain-killer -- to treat the symptoms of her malaise. He said he didn't know what was really wrong with her. We took her home and she slept the rest of the day and night.

The next morning she was completely back to normal. That lasted more than a week. She loved her walks, trotting right along, sniffing everything along the way, and chasing cats when she saw or thought she saw one. It was like old times. Her appetite was good, her bodily functions were normal, and we were very happy.

Then, this past Sunday, we left Collette alone at home on Sunday afternoon while we went up to Blois to have lunch with some friends there. When we got home at 6:30 p.m., Collette was obviously not well. She had that hang-dog posture; her eyes were dull; she didn't want to go outside. We made her go out anyway, because we figured she must need to. She didn't stay long and when she came back in we realized her belly was tender again. She yelped when we touched her.

By Monday morning, everything was fine again. We had good walks Monday morning and afternoon, and a good walk on Tuesday morning. That was my turn to go walking with her, and I was happy to see how energetic Collette was, how interested in everything. She did a good poop. But I noticed again how her hearing is failing her -- if you speak to her when she's walking ahead of you, she doesn't seem to hear. When you are facing her, her hearing is better.

Then late Tuesday afternoon the symptoms came back. She again was unable to lie down. At one point she kind of got herself wedged in between the coffee table and the sofa and wouldn't move. I took ahold of her thighs and slowly backed her out of her predicament, but she suddenly went limp and fell over on her side on the hard tile floor. She didn't hurt herself, but she was in no hurry to get up.

It was after 9:00. We got her up onto the bed and she was stretched out on her side. Walt lay down next to her and looked into her eyes. "She keeps looking right into my eyes," he said, "as if she wants to make sure I'm here." We went to bed an hour or so later -- Collette hadn't moved.

During the night, she got up and went and drank a lot of water. Her movement woke me up and I heard her slurping and slurping water for what seemed like forever. Then she came back into the bedroom but didn't jump up onto the bed. I don't think she was able to.

A while later, I realized Walt had gotten up. He put Collette back up on the bed. When I got up at 7:45 this morning, Collette didn't stir. Walt got up a few minutes later. Collette still didn't move. It was nearly an hour later when she got up. That is highly unusual behavior. Normally she wakes us up as soon as it's light outside because she's ready to go.

She had drunk so much water during the night, we figured she must need to go outside. It was drizzling rain, but Walt took her out for a short walk. He said she walked very slowing on the way out, but when he turned around to come back to the house she started trotting along beside him.

Since this morning, she's been sleeping. She didn't eat at her normal time, right after the walk, but she did eat a little at noontime. She sleeps on the sofa as I write this. At least she is comfortable lying down today.

I suspect liver or pancreas problems. Those organs weren't visible on the x-ray the vet did about 10 days ago, but in fact the blood test back in June didn't show any abnormalities in Collette's liver functions. We are going to be careful of the dog's diet for a few days -- no more food from the table, and no cheese! -- to see if that might make a difference.

These are sad days. Collette has never been sick before, so we don't know what to do or what to expect.

Have a look at her adventure last July, chasing the deer.
Posted by Ken Broadhurst at 14:12