As I've already said elsewhere, this blog is about food as much as it's about anything else. I love to cook, and I learned to cook in France. It was 1972. I was 23 years old, and I was teaching English in a high school (le lycée Corneille) in Rouen, in Normandy. The job had been arranged by the University of Illinois French Department, where I was working on my master's degree. 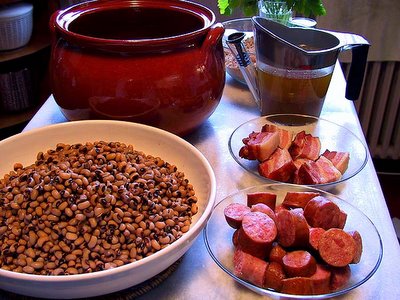 I taught 12 hours a week, if I remember, and I didn't give grades -- I was an assistant, not a full-fledged teacher. In other words, I had no papers to correct, and my preparation was minimal. I had lots of time on my hands, and not much money. Half my salary went for rent, and with what was left I had about $5.00 (25 French francs) a day to live on.

I had realized how good French food was when I spent a semester in Provence as an undergraduate student in 1970. It was just as good in Normandy. The difference was that I didn't have enough money to eat in restaurants in 1972. My parents were no longer footing the bill. So I had only one choice: learn how to cook. Either that, or not eat. 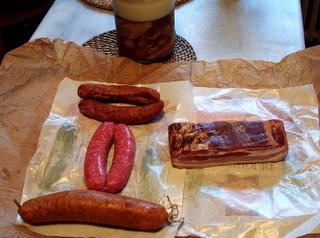 All that is to say that I started cooking French food back then. But I also love the food in the Southern U.S. -- yes, even those cooked-to-death vegetables! There are many similarities between French country cooking and Southern U.S. cooking. 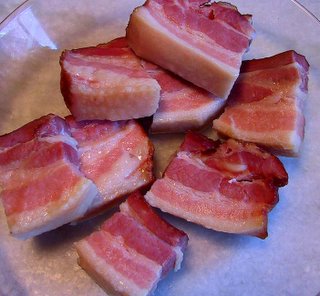 So now that I live in France I practice fusion cuisine. I use a mix of Southern and French ingre-
dients and mostly French methods. One prime example of my approach is my black-eyed pea cassoulet. [The sausages in the picture above are Toulouse, Montbéliard, and Morteau -- all standard items in France. The smoked slab bacon (poitrine fumée) is also available everywhere in France -- but not in California.]

Cassoulet is a specialty of southwestern France, especially the area around Toulouse. It's a big pot of slow-cooked white beans (called lingots in French) containing various meats and sausages. Preserved duck -- pieces of duck cooked slowly in their own fat -- is a key ingredient. I've also cooked pieces of turkey the same way -- in duck fat -- and used them in the cassoulet. Toulouse sausages, too, are really good in it. Saucisses de Toulouse are pure pork, and in the authentic version the lean and fat pork are chopped up with a knife, not a meat grinder, before they are stuffed into the sausage casing. Other meats -- chunks of lean pork, or chunks of smoked pork or smoked sausages, make the whole dish even better. 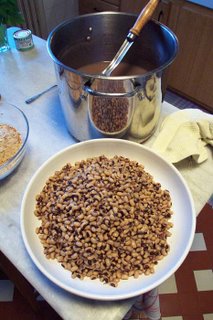 So now that I'm in France, and unempl... er, retired, I have the two things I need most to satisfy my urge to make good food: time on my hands (not to mention thyme in my garden, ha ha ha) and a ready supply of good French ingredients.

So how does cassoulet become an example of fusion cuisine? You substitute black-eyed peas for the white beans in the French recipe. And it doesn't hurt to cook them slowly in a richly flavored duck or chicken broth before you add the meats to the mix. Flavor the broth with herbs (bay leaf, thyme, parsley) and vegetables (onions, carrots, leeks).

What's the method? You cook the beans separately. Then put a layer of them in a big dish or pot that can go into a hot oven. 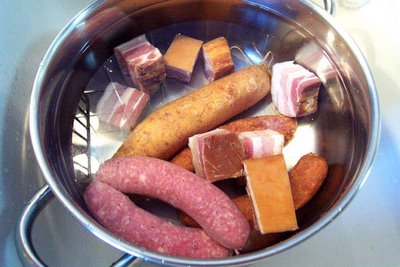 Put a layer of pre-cooked meats -- pieces of duck, sausage, pork, turkey, slab bacon, etc., simmered for 20 minutes in water -- over the beans, and then put in more layers of beans and meat, finishing with beans. 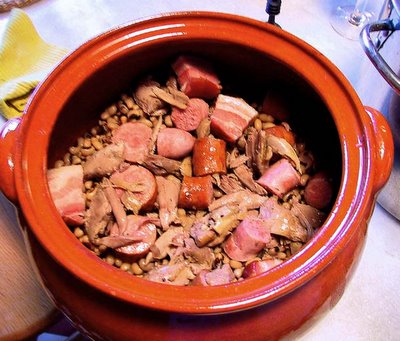 Moisten the whole dish with the broth the beans cooked in. Put a layer of bread crumbs on the top, and moisten that with (ideally) a little duck fat. Put the dish in the oven and when it's bubbling and browned, it's ready. 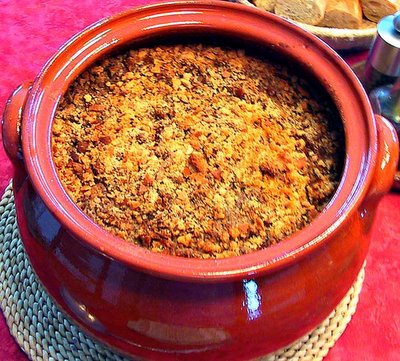 Serve it with a big green salad dressed with vinegar and oil or a mustardy vinaigrette.
Posted by Ken Broadhurst at 09:48