I haven't specifically mentioned Collette lately. The news is good. It's been two weeks since her last crise. She shows no signs of being in pain, she enjoys twice-daily walks, and her appetite is good. We assume the new diet, which we are sticking too even though Collette seems disappointed not to get more food from the table, is the key to her better health. But who knows? Maybe she had a virus....

By the way, I want to explain the way comments are handled on this blog. First, why do you have to type the funny letters before you are allowed to post? Well, that's how Google keeps people from setting up automated postings to the comment area. An automated program can't see the letters and can't type them in. Before I turned on that feature, I got a bunch of comments on my postings that were actually ads posted automatically. So that's what that's for.

Also, I have turned on "comment moderation", which means your comments come to me via e-mail and I publish them. The only reason for that -- and I'm thinking about turning it off so your comments are posted directly -- is that one of the first comments I ever got on the blog said something like "Blogs are for losers. Get a life you piece of s**t." That comment was posted anonymously. I'm sure none of you sent it. Moderating comments lets me delete such nice postings before they ever appear in the blog.

It was frosty out this morning when I took the dog for her morning promenade. I took this series of pictures. I'm getting used to my new camera and I'm pretty happy with these.

It was about 8:00 a.m. and the sky was mostly cloudy. There was a little sliver of clear sky over in the south, where the sun was coming up. The temperature was about 30ºF. Right outside our back gate this was the view: 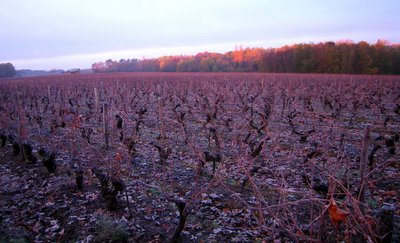 Here's a zoomed shot. Remember, you can click the pictures to see larger views. This early in the morning, with low light conditions, zoomed shots come out a little blurry. But you can really see the horizontal sunbeams on the trees beyond the vineyard in this one:

There are a lot of leaves on the ground right now: 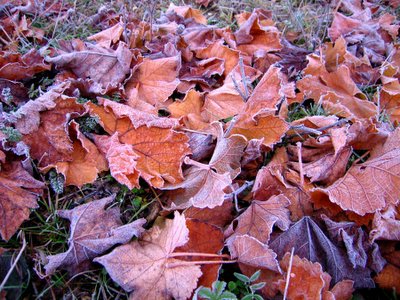 And as I said, it was frosty. Most of the grasses and plants were frosty white: 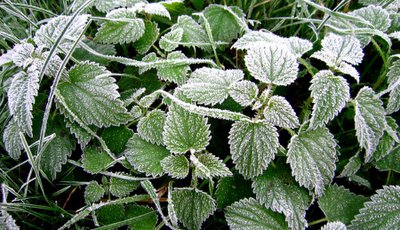 When I looked back over my shoulder, toward the sunrise, this is what I saw: 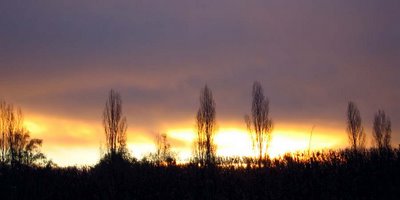 A little farther out is the field where the donkey and the poney often hang out. They were nowhere to be seen this morning. But Collette was there, sniffing around: 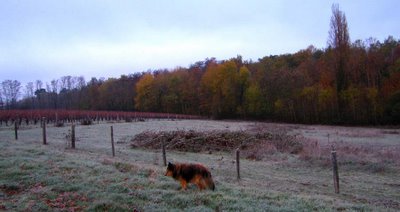 Here's a view back toward our house, with the sun coming up. Again, it's zoomed, so it's a little fuzzy, but still pretty:

The grape vines are mostly bare now. You can see that these are old vines: 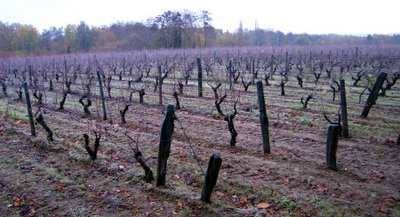 We walk along the edge of the woods that surround the vines out behind our house. The woods are colorful now: 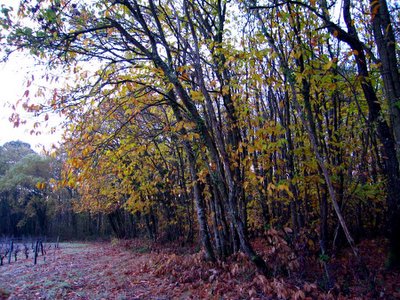 Just along the edge of the woods, I was startled when a pheasant took flight in a noisy beating of wings. Collette didn't seem to notice -- she's not interested in birds. I looked and saw a second pheasant, a female, crouched down near me. It stayed until I got really close, then it took off running, not flying, to escape. 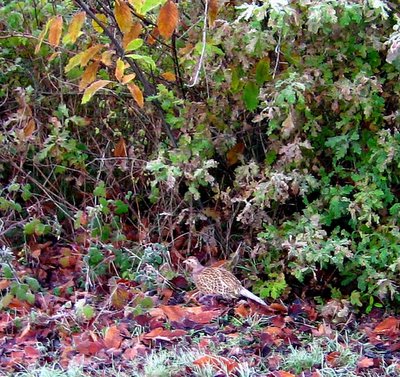 Here's another picture of Collette. She loves to run down the row of vines next to the one I'm walking it. It's like a game to her -- she likes to walk down the next row over and keep an eye on me as we walk, rather than staying right next to me. I think it amazes her that we end up at the same place in the end. 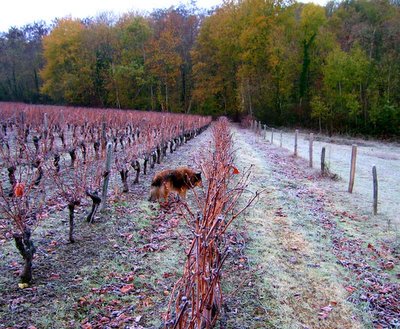 The weather is supposed to turn warmer and maybe rainy tomorrow and Saturday. We could use some warmer weather. It's been downright cold for the past two weeks or so.
Posted by Ken Broadhurst at 17:54