Part Deux of the mutton story

I called Gisèle yesterday morning, Tuesday, to get a status update on the lamb. She said she was busy working for us ("Je travaille pour vous"). I told her we could come over in an hour or so, after we ran a few errands. "If you want to come help me, I'd be glad to have you," she said. She was sorting, bagging, and labeling all the pieces of lamb. 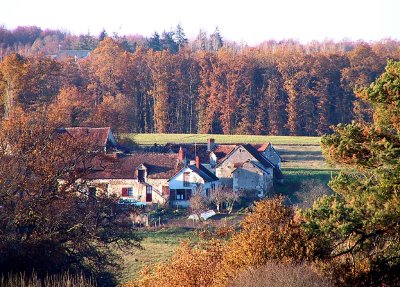 An old farm compound on the way over to Gisèle's place
I had driven over to her house on the previous Saturday afternoon to give her the money to pay for the lamb for Brassia (€130) and the 10 liters of that white rosé wine (€20) she thought was so good. She wasn't there when I arrived, but the door to her little glassed-in front porch, which is full of beautiful plants, was not locked. And the next door was open too, leading into the small kitchen. I stuck my head in and yelled. "Coucou! Il y a quelqu'un?" Anybody home? No answer. 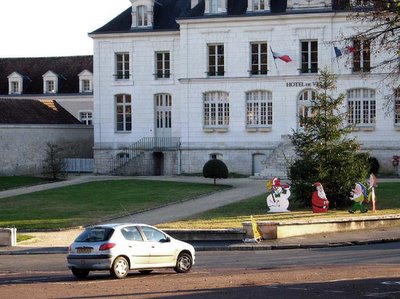 On the way to Gisèle's, I stopped at the bank to get the cash. I parked in front of
St-Aignan's town hall, which has Christmas decorations out front now.
I had an envelope in the car, so I put the €150 in it and wrote a note on the back detailing what it was for. I stuck it in a book that I was returning to Gisèle before she had time to forget that she had lent it to us, and I put the book on the table in the kitchen. I felt better about being able to leave the cash inside the house -- the butcher man had insisted on cash -- even though the doors were not locked. It was safer than leaving it outside. A lot of the transactions around here are cash only. I assume people are trying to avoid taxes, but I don't really know if that's why they want cash. 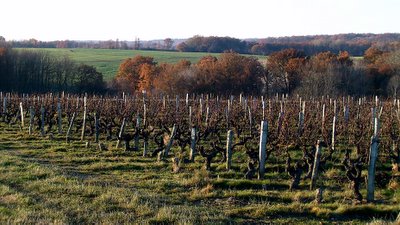 Vines and fields near Gisèle's
Gisèle called a few minutes after I got back home. She had found the book and the cash, and said everything was set then. She said we wouldn't actually get the meat until later in the week, because the butcher wouldn't cut up the lambs until the carcasses had cooled for a couple of days. Slaughtering was scheduled for Monday. I told her I'd stop by early in the week to bring her some freezer bags. She said I didn't have to do that -- she had already bought some. But she had said so many times that she was working really hard to accommodate our request for a whole lamb for our friends that I certainly didn't want her to go out of pocket for things like freezer bags and labels.

On Monday Walt and I drove over to Amboise (20 miles) to buy a Christmas tree. We got one at a garden supply store called Le Baobab for €8, a very good price. It's perfect, and we are happy. We drove on to Vouvray (15 more miles) to buy some wine for the holidays. We love the sparkling méthode traditionnelle Vouvray -- more about that later. And then we went to a grocery store (or two, actually -- Atac in Vouvray, where we couldn't find what we were looking for, and Leclerc in Amboise) to pick up a few things, including some freezer bags large enough to hold a leg of lamb. Even if Gisèle had already bought bags, I wanted to give her some. I knew she wouldn't let me give her money to pay for the ones she had already bought.

When I called Gisèle on Tuesday morning, then, I told her I was going to bring some bags and told her I realized I needed to pay her for our side of lamb. She said we would worry about that part later. For the time being, she was working on the lamb for Brassia (she kept calling her Graciella). The Thursday before, Gisèle had said she would like it if we could get rid of the lamb carcass (les déchets) for her, and I had told her Tuesday was garbage day for us so that wouldn't be a problem.

When we finally arrived at Gisèle's just before noon, she had all the lamb pieces bagged and labeled -- including our half-a-lamb. We were surprised that our lamb was ready. I told Gisèle we needed to pay her, and she waved her hands and shook her head no, saying we'll worry about that later. The lambs cuts were in ziploc bags that were spread out on two big trays.

"Come out back with me and let me show you how much waste there is when you butcher an animal," she insisted. We didn't particularly want to know, but she had her coat on by then and we had no choice but to go look. She took us to a room in an outbuilding where were were two freezers and where we saw another tray full of ziploc bags containing pieces of meat. That was her half of the lamb we were also getting half of. She picked up a little square dish holding pieces of hard lamb fat and said "Look at all this. This is all waste -- unless you want it for your dog." It was such a small amount, and it was so clean and fresh looking that I was puzzled. I said no, Collette can't eat fat any more, it makes her sick, and Gisèle said oui, I guess you're right.

So we though we were getting off easy. Then she said, "Come over here," as we stepped outside the little room. Set up in a open carport there was a big long table -- a rough board on trestles, actually. "Ça s'est passé ici hier matin. Vous auriez vu ça..." This is where the act was perpetrated yesterday morning, she said. You should have seen the mess...

There were two buckets sitting there on the floor with a inch or two of blood in the bottom. And there was a big plasticized bag (made out of the kind of material they make tarps out of) full of the real waste from the butchering process. It smelled vaguely like the odor in a French butcher shop. "Ça sent mauvais" -- it stinks, she warned us. "I need you to put it in my car so that we can go dump it tonight. I can't lift it." The bag was very heavy.

I told her we could take it home and put it in our garbage can. The garbage would be picked up in an hour or two. But you don't want to put that in your car, she said. It smells and it'll make a mess. What she said next confused me. "Je vais l'apporter aux chairs ce soir," she said -- she was going to take it [somewhere] in the evening. "Aux chairs" might mean to some meat processing or disposal facility, I thought, since chair means "flesh". It's the same word as carne in Spanish.

What do you mean when you say aux chairs? I asked. "A la rivière," she said, off-handedly. To the river. Oh, it was "au Cher," the name of our river, not "aux chairs" -- which would be pronounced the same way. Yuck. She was just going to dump the bones, organs, skin, and leftover flesh and fat right into the river. I thought about all that stuff washing up downstream in Montrichard or at Chenonceaux. I guess that was the way things were done in times past -- and sometimes still are, obviously.

I'm sorry I didn't take pictures. You might not be, though.

I have what we need, I said, and I ran back to my car to get out a big plastic tub I had brought along, just in case. Walt held the tub and I was able to pick up the bag of déchets and set it inside. The bag's bottom seam was bursting and vile things were threatening to fall out on the ground. Gisèle was starting her car to move it out of the driveway so that we could back our car up closer to the tub -- "Vous ne pouvez pas le soulever," she kept saying. You can't possibly lift it. But the tub has handles on it, and with Walt on one side and me on the other, we had no trouble carrying it to the car. Gisèle shrugged and turned off her motor.

We went back in the house. Gisèle wanted to know if we were interested in specific lamb organs she had saved. The liver, for instance. I said, yes, we'll try it. She kept a couple of pieces for Jean-Luc, saying she didn't like it much herself but offering suggestions on preparing it for the table. Or the kidneys and heart. I told her Collette could eat the heart -- that's muscle. And I like the kidneys. (I used to buy them from the supermarket back in the '70's when I lived in Champaign-Urbana, in Illinois. I had to order them a few days in advance, and the guy at the butcher counter never failed to remark to me, when I picked them up, that my cat would surely be eating well that evening. I never told him I didn't have a cat.) Gisèle had kidneys cooking with mushrooms in a pan on the stove, in fact. They're good that way, with lots of black pepper and a good quantity of cream to make a sauce.

She said here, take the tongues. They're good boiled with vegetables. Peel off the skin after you cook them. I figured Collette could eat them -- they're muscle, too -- if we couldn't. And before she could offer, I told her I wouldn't take the brains. I wouldn't know what to do with them. She said she had eaten one the night before, lightly sauteed in butter. Delicious. I'll take her word for it. I do have my limits.

We made it home with the two trays of edible lamb and the tub full of lamb débris. It didn't really smell that bad. We managed to lift the tub out of the car and the bag out of the tub and into the garbage can. I washed the tub out with the hose outdoors, and then again the laundry sink with hot soapy water. I washed my hands well, and then I went and washed the steering wheel and gearshift knob in the car, just in case.

An hour or so later, I heard the garbage truck pull up. The man on the back of the truck hooked our rolling garbage can up to the apparatus that lifts the can and empties it. I saw that big bag plop out into the bin, and I breathed a sigh of relief. The deed was done. Ah, the joys of life in the country! 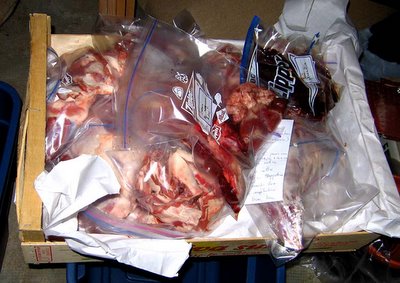 A tray of lamb in ziploc bags, aging
Now the lamb has to "age" for at least three days in the cellar before we can cook or freeze it. "Ne fermez pas les sacs," Gisèle said three or four times, to make sure we understood and convince us she was serious. Don't seal the bags for at least three days. We will follow her instructions. And we are happy to know that we have lamb curries, seven-hour leg of lamb, and other rustic dishes in our near future.
Posted by Ken Broadhurst at 09:00