Making confit out of a duck

As I said, I have lots of free time these days. I spend much of it preparing good food, using local products or good-quality products available at the local supermarkets. This fall, the Intermarché supermarket had ducks on special (en promotion) twice. The first time, it was canettes (ducklings) — smaller, leaner birds that are good for roasting or poaching.

A couple of weeks later, Intermarché had canards gras (fattened ducks) en promotion. These are the ducks that have been fattened up so that their liver will make a good foie gras. After the livers have been "harvested," the duck carcasses are sold off at good prices.

I got a flyer in the mail one Monday saying Intermarché would have the canards gras on special starting the next day. So I drove over there the next morning and stood in a long line at the butcher counter. The butcher seemed to have a long-standing personal relationship with every one of the five or so people in line ahead of me. He chatted with them all, sharing and enjoying a lot of banter and local gossip. I must have waited in line for 20 minutes.

When my turn came, I held up the advertising flyer and told the butcher that I wanted a canard gras. « Désolé, monsieur, il n'y en a plus. J'ai tout vendu. » They're all sold out. « Déjà ? » I exclaimed. I think there was a little edginess in my voice. This wasn't the first time I had gone over to Intermarché on the first day of a sale, only to be told on arrival, and usually after waiting in line for a while, that the item advertised en promotion was already sold out. "I drove all the way over here just for the duck, and now you tell me they are already all sold," I complained. I didn't tell him it was only a five-minute drive. "We might get some more in tonight, but I can't guarantee it," he said. "You can always call me in the morning to see if I have any." I bought some other things we needed, but I left the store unhappy, muttering to myself that I would just have to stop shopping at Intermarché.

The next day I had some other reason for going over to Noyers, where the Intermarché store is located. So I stopped in to see if the ducks had been restocked. I got to the butcher counter and the same butcher was on duty. He was waiting on a woman that he seemed to know (my first clue: they said tu to each other). When he saw me walk up, he looked startled. He dropped what he was doing and spoke to me. « Bonjour, monsieur. Qu'est-ce que c'était que vous vouliez — des magrets ? » What was it you wanted, duck breast? I told you to call me to see if... No, I said, I wanted a canard entier — a whole duck.

"Oh, we got some in this morning..." he was saying when the woman he had been waiting on said « Eh moi, alors ! Tu m'oublies comme ça? » Have you forgotten all about me? The butcher blushed and went back to waiting on the woman. She and I looked at each other and smiled.

When the butcher came back to me, he said, "Look at these ducks. Look how beautiful they are. Are you sure you just want one? They are ready for the freezer. And we won't be getting any more." It worked: I bought two. He wrapped them in butcher paper for freezing.

So that's how I came to have two ducks that are perfect for making confit de canard, one of the prime ingredients in cassoulet. I made confit out of one of them over the past few days. I was surprised when I saw that the ducks I was buying still had their heads on them. That is one way the seller makes sure you know what you are buying. They were definitely ducks, as you can see. 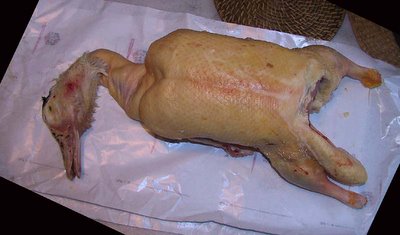 "Few days?" you're wondering. Well, yes. I started early Saturday morning, and I finished late Monday afternoon. Making confit is a way of preserving duck (or goose or pork or turkey) so that if will keep for months in the refrigerator or a cold cellar. You cook the meat slowly in fat and then you cover it in the same fat so that it is sealed and protected from the air. Sealed that way, the meat improves with age — at least for a few months. Before refrigeration and freezers, making confit was a way to make sure you had a winter's supply of good meat.

Don't get squeamish about cooking the duck in fat. Just think of fried chicken. It's cooked in fat. But it's coated in bread and flour that absorb the fat, and that you eat. The duck doesn't absorb the fat like fried chicken does. And think about ground beef — hamburgers — that is 20% fat in the U.S., if not more. Not to mention fries, chips, sausages, donuts, and ... should I continue? I'd rather have duck confit.

Besides preserving it, cooking the duck in duck fat also gives it great flavor and texture. You start by cutting the duck into pieces and marinating it for hours or days. I marinated this one for 48 hours.

The first step is to cut up the duck. I cut off the head and put it in a ziploc back in the freezer, so that I could throw it away on garbage day (Tuesday). I also saved the neck in a ziploc bag in the freezer, thinking I would make broth with it one day and then pick off the meat for Collette.

Once the duck was was cut up, I ended up with two (large) breasts, two thigh/leg pieces, and two wings (the first joint, which has some meat on it). I trimmed the extra fat and skin from around all the pieces, but I didn't entirely remove the skin. 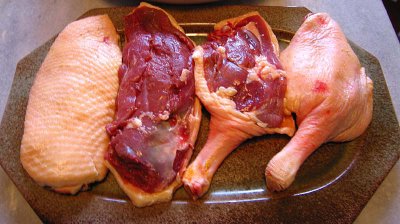 The next step is to take all the fat and skin that you trim off the duck pieces and the carcass and to render it out. Put all the fat in a pan with about a cup of water and set it on low heat. Let it simmer for an hour or more, covered. Then remove the rendered pieces with a slotted spoon and set them aside. Pour the liquid fat through a strainer to make sure it's all cleaned up. You can make cracklings with the duck skin, but that's another story... 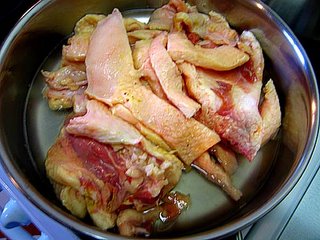 While the fat is rendering, prepare a marinade for the duck pieces that will become confit. Chop up an onion or two, or an onion and a shallot. Thinly slice a couple of big garlic cloves. Prepare a dozen or so black peppercorns, and a dozen or so allspice berries (if you have them). Instead of allspice berries (known as piment de la Jamaïque in French), you can use three or four whole cloves. Add some thyme and three or four good bay leaves. Most importantly, rub all the duck pieces with a good quantity of gros sel — coarse salt. In France, they will always tell you that the best salt is sel gris, unrefined sea salt that is gray in color because it hasn't had all the good minerals refined out of it. Sel de Guérande, a famous place on the Atlantic coast of France, is highly recommended. This is a dry marinade. I did mine in a ziploc bag this time, and I put it in the refrigerator for two days. 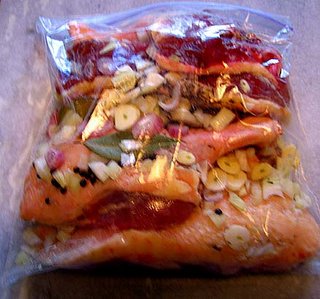 This was a canard gras, a fattened duck, and it had a lot of fat on it. Once it was rendered, I had about two cups of pure duck fat. I wasn't sure that would be enough for the cooking process, but I also had two small jars of duck fat that I had bought at the market (you never know when it might come in handy, and it keeps indefinitely). Also, I had saved the fat from another duck I cooked a month or so ago, and that was about two cups. So altogether, I had at least six cups (1.5 l) of duck fat I could use to cook and preserve the duck in. That seemed like a good amount. (I know, most of you are thinking you would never do something like this — but then you don't live in France!).


Jars of duck and goose fat are sold at Intermarché and other French supermarkets. You can use it to sauté potatoes. You can add a little bit to vegetables in the place of butter or olive oil as a seasoning. You can baste a roasted chicken with it. I put a tablespoon of melted duck fat in my cornbread batter before I bake it, for example. It gives good flavor.

After the duck pieces have marinated for 12, 24, 36, or 48 hours, wipe them off to remove the peppercorns, allspice berries or cloves, and the excess salt (if it hasn't all melted). Get rid of the chopped onion, shallot, and garlic, and the bay leaves. Put the duck pieces in a pot or dish and cover them with melted duck fat (the six or more cups of it you've saved or bought). Add some "fresh" peppercorns, allspice berries, and bay leaves if you want, and throw in about 10 unpeeled garlic cloves. Put the pot on the stove (or the dish in the oven) and cook it slowly for several hours — some recipes say 12 to 24 hours, but that seems excessive to me. I cooked this batch for about 6 hours on top of the stove, at the lowest temperature. If you put it in the oven, set the temperature at 200ºF or even 180ºF (85 to 100ºC). When the duck is done, remove the pieces from the fat. 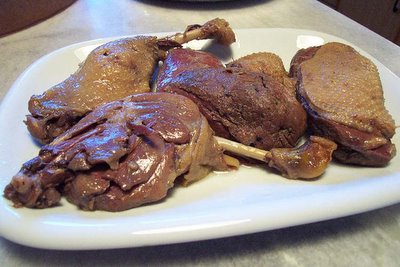 Put the pieces in a deep dish. Strain the fat to remove the peppercorns, allspice berries, bay leaves, and garlic cloves. Pour the fat over the cooked duck pieces. Make sure they are completely covered and protected from the air. Save the garlic cloves, which are also confits at this point — squeeze the garlic flesh out of the husks and eat it on bread, crackers, or toast. Yum. Store the confit for weeks or even months in the refrigerator or some other cool place. It's better if you keep it for two or three weeks before you eat it. Store the duck fat, too, and use it when you are cooking or seasoning vegetables. 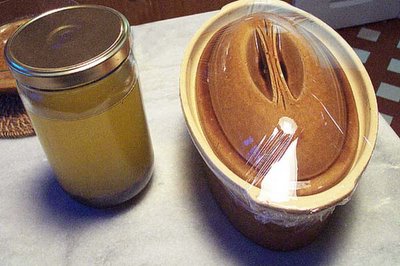 A jar of duck fat and a crock of duck confit

When you're ready to eat the confit, you can heat up the crock in the oven (at low temperature) or in the microwave (on low) to melt the fat. Then remove the pieces you want to serve and let the rest cool down again for storage in the refrigerator or cellar. Drain the fat from the pieces of duck by setting them on a rack or on paper toweling, and then heat them up in the oven or on the grill. Serve them with salad, a green vegetable, or sauteed potatoes or carrots or turnips. Or with beans. Why not make a cassoulet?
Posted by Ken Broadhurst at 17:36