At Thanksgiving Walt asked our friend Gisèle, who keeps sheep and geese and parakeets and cats and a dog at her place on the other side of the village, along with a big vegetable garden, if she planned to kill a lamb this winter. Two years ago, she had one slaughtered and we bought half of it from her, all prepared for cooking or freezing.

A leg to roast, a shoulder to roast or stew, a big freezer bag full of stew meat, and plenty of ribs and chops — that was the take. And the price was right. More importantly, the meat was delicious. When we bought it, she said to be sure not to cook it or put it in the refrigerator or freezer for about a week, but just to keep it in a cool place so that it could age, or ripen, or whatever. That seemed strange to us, even though we know the best meat is aged. We followed her advice, and the result was excellent. 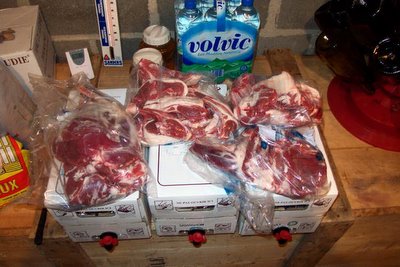 The freezer bags full of lamb aging in our cellar,
on top of the boxes of wine, in December 2003
This year, Gisèle said yes, she was going to have the rest of her sheep slaughtered and replace them with new stock. We signed up to buy another half -- is that called a side in English? it's a moitié in French -- but it means that this year we will be getting mutton rather than lamb, I think. I hope it will be good. I know we can make stew out of a lot of it, or make curries -- Walt brought back some cans of curry powder from London in September when he passed through there on his way to New York to visit his family. I suppose we can run some of the meat through the grinder and make moussaka -- we have eggplant and tomatoes in the freezer from last summer's vegetable garden. We also have the big new freezer.

And I have a recipe all planned out in my head for the gigot, the leg roast. It's called a gigot de sept heures -- seven-hour leg of lamb ( or mutton). I saw Eric on CuisineTV do it a couple of weeks ago. You brown the leg and then put in it a pan with some vegetables including onions, garlic, and carrots, some herbs of course, and you roast it in a slow oven, covered, for seven hours (hence the name). When it's done, it's falling off the bone, succulent (moelleux, in French), tender, and tasty.

Last Friday, we went over to see our friend Brassia in the village called Mesland (that's may-LAW[N]), up on the Loire about 30 miles north of here. She had invited us for lunch. Brassia is a great cook -- her father was Senegalese and her mother Vietnamese, so she cooks West African and Southeast Asian dishes that you don't see much out here in the French countryside. She does catering. She and her husband Gilles moved here from Paris about five years ago. He sells real estate now, and they also rent out a gîte rural, a vacation rental that is a house on their property there in Mesland, which is a famous wine village. 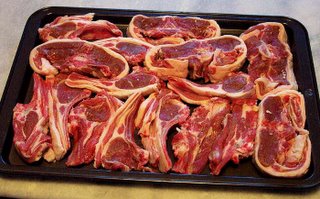 Well we were talking about food and we mentioned the side of lamb or mutton that we will be getting from Gisèle. Brassia's ears perked up and she immediately asked if we thought she might get in on the deal. We told her that Gisèle had said she was planning to have all her sheep slaughtered this month, so it seemed like a possibility and we would ask. We didn't really know how many sheep Gisèle had, but it seemed like we had seen half a dozen or so out in the pasture.

By the way, last summer Gisèle and her S.O. (concubin, in French) Jean-Luc had thrown a big barbecue known as a méchoui, which is a North African term for a spit-roasted lamb. They had had two lambs slaughtered then and they roasted both of them for a crowd of about 50 people. 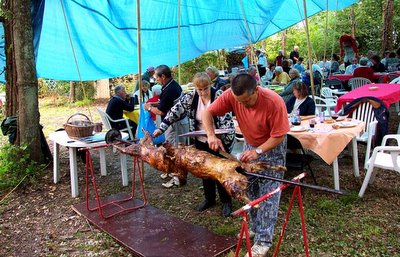 The méchoui at Gisèle's last summer
We were lucky enough to be invited. Here's what it's like here: we remarked to Gisèle (she's 75 years old) that the méchoui lamb was delicious. She said, oh yes, that's Madeleine (or some such name). We were eating a lamb that she had named and petted and adored. And it was delicious. 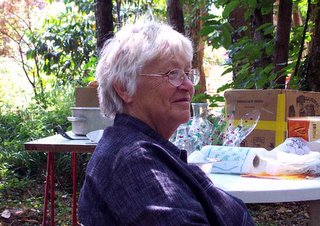 Gisèle stopped by night before last just to say hello. One of the first things she wanted to talk about was something that had her very upset.
She had misplaced and had been turning her house upside-down searching for a cherished book of recipes for making jams and jellies. She was very upset that she couldn't find it. Well, we said, it's a good thing you mentioned it, because it's here, and here it is. Walt had immediatly run and got it. She had loaned it to us about three weeks ago, and even though jelly-making season is over, we had taken it because she insisted. Then she had forgotten the whole incident, obviously. She was so thrilled to get her book back that she had tears in her eyes, and she hugged us and kissed us both on the cheek.

Then we asked her whether it would be possible to get a whole lamb or mutton carcass for Brassia. She said her animals were all spoken for, but she would talk to the man who does the slaughtering and butchering, because he keeps livestock too. When she left our house after about 30 minutes, she forgot her purse. We called her cell phone to tell her we had her sac à main, and Jean-Luc answered. He was in his car on his way home, and he said he would be there in 15 minutes or less. He expected Gisèle would be there too. We said we'd drive over with the purse.

When we got there, Gisèle was happy to have her purse back even though she hadn't yet realized she had left it behind. Jean-Luc opened a bottle of Anjou white wine and we settled in for a little apéritif. Gisèle got on the phone and called her butcher friend to see about the lamb. He told her yes, he could supply the lamb, and the slaughtering and butchering would cost 30 euros. He wasn't sure about the price of the lamb itself until he picked one out and weighed it. We finished our apéro and drove back home to watch Star Trek on TV.

Driving to Gisèle's, by the way, we rode out through the vineyards behind our house and startled a couple of deer out there. And over closer to Gisèle's, on the other side of the village, we saw at least half a dozen more deer in the fields. I was surprised to see them out so early in the evening. They are very pretty when you catch a glimpse of them in the car headlights, and it reminds you that you really do live in the country.

Yesterday, Gisèle stopped by at lunchtime to give us the news about the meat. Our friends Adrienne and Jean, who live near Amboise, were here for lunch. They've met Gisèle before, so it worked out nicely. I asked Gisèle to stay for lunch, but she hesitated. "Qu'est-ce que vous allez manger?" she said -- "What are you having?" -- and everybody laughed. She was a little embarrassed, but just a little. I told her I had made a North Carolina lunch -- vinegary Eastern N.C.-style barbecued pork, a pan of cornbread dressing, and some collard greens. She said no, she wouldn't stay for lunch, but she would be glad to take home a piece of the cornbread dressing if I didn't mind. I wrapped a big piece up in foil and gave it to her. "C'est tout chaud!" she said -- "It's hot!" I had just taken it out of the oven.

It turned out that the price of the lamb is 100 euros. The animal weighs 40 to 50 kilos -- that's 90 to 110 lbs. That's on the hoof, of course, so there will be less meat than that, but it's a good price for farm-raised, fresh mutton. I immediately called Brassia to see if 130 euros (about $150 at today's rates) sounded OK and she said of course. She has two children, a husband, two freezers, and a catering business, so she'll go through that much mutton in a hurry, I imagine.

A gigot d'agneau ready for the oven,
with the classic flageolets on the side
Gisèle said that she needed us to bring her cash before Monday, and that she would also need some big freezer bags to put everything in. In addition, she said that she would need us to put some of the lamb skin and other débris into big garbage bags Monday evening and get rid of it for her. We said Tuesday is garbage day for us, so that will not be a problem.

Oh, the other thing Gisèle had news about was some wine she had "scored". The same man who keeps and slaughters and butchers livestock, it turns out, makes wine. She had just gotten some and had brought over a five-liter jug of it so that we could taste it. She said it was rosé wine made from Sauvignon Blanc grapes. Now normally you need red grapes to make rosé wine, so rosé made from white grapes seemed like a novelty. She said we ought to taste it, it is really good. Walt wondered if she could tell us where she got it, and she said it was a secret. If we wanted some, she could buy it for us.

We poured some of the wine out of the jug and into a pitcher, and then served five little glasses so everybody could taste. It wasn't rosé at all, but white of course -- Sauvignon Blanc is a white grape (comme son nom l'indique, as they say in French). But Gisèle persisted in saying it was a rosé wine. Whatever the color, it was pretty good. It had a very slight fizz, it was dry and clean-tasting, and it was sufficiently fruity. It cost less than two euros a liter -- that's about $2.00 a bottle. We said we would take 10 liters, and I went downstairs to the cellar and got her a 10-liter jug that she could have the guy put it in. Gisèle was clear that we couldn't keep the jug she had brought over -- that was hers. She gulped down her little glass of it, and then I asked if anybody wanted a second taste because there was still some in the pitcher. Gisèle said we were doing more than a tasting at that point, so I did really little pours and then poured the remainder of the "rosé"out of the pitcher back into her plastic jug. We carried her jug, ours, and some other things out to her car and she drove off -- hopefully not too tipsy, but with her square of cornbread dressing in one hand and her sac à main, this time, in the other.
Posted by Ken Broadhurst at 06:05