The Market on New Year's Eve

It's New Year's Eve in Saint-Aignan. The weather has gone from downright cold to almost warm. Yesterday we had snow, then sleet, then freezing rain, and then just rain. All that in the space of eight hours.

When I got up, the temperature was about 25ºF. When I went to bed last night, it was about 45. Overnight, it hit 50. All the snow is gone. The grass is green. Our collard greens and parsley survived the freeze, even though temperatures went down to about 21. That's -6ºC.

This morning we went to the outdoor market on the main square in Saint-Aignan to buy oysters and other holiday foods. The big parking lot down on the river was far from full -- it is often completely parked up on big market days -- and the market was busy but not jammed with people. The only stands that had long lines and big crowds were the cheese and seafood sellers'. Here are the people gathered in front of the seafood stand.

We headed for the oyster section. The loose oysters, where you can buy as many as you want of each kind, and pay by the kilo, were here. 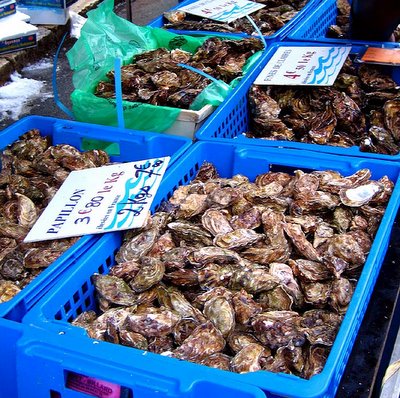 I ended up buying 18 Papillons, which are smaller oysters that come from Brittany, for €3.70, and 12 Fines de Claires for €3.80. When it comes to oysters, smaller is better, in my opinion -- though many people love the really gigantic ones that are called Pieds de Cheval (horses' hooves). Fines de Claires are oysters that are brought into small salt ponds along the Atlantic coast to be fattened up for a few weeks or months before they are taken to market. "Fines" means they are fine oysters, and the "claires" are the basins of clear water where they are raised. They're not as salty as oysters that are taken straight out of the sea.

The seafood vendor was also selling oysters by the basket-full. You could get various sizes of Fines de Claires in quantities of 50 or 100. Oysters, along with lobsters and other seafood delicacies, are a favorite food for New Year's Eve in France. 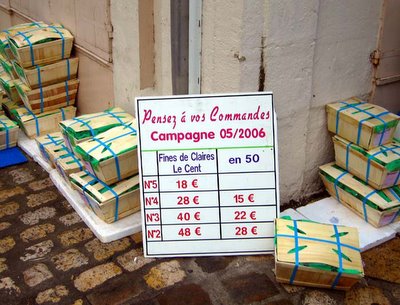 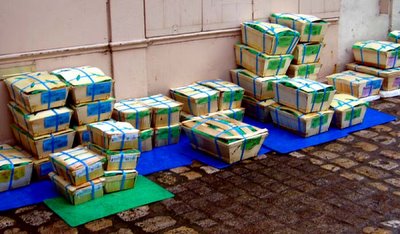 The market was not as big today as it sometimes is; some of the merchants must have taken the holidays off. But there a lot of vendors, including several pork butchers (charcutiers) selling meats, pâtés, sausages, and other specialties. 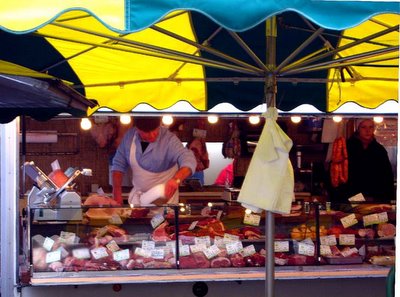 I took other pictures at my favorite charcuterie stand, Chez Doudouille, but I'm saving them for another topic. I'll post it in a day or two.

Here's the mushroom lady. She grows them herself, I've been told. They are fresh, appetizing, and inexpensive. 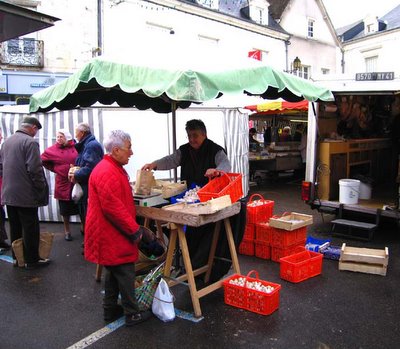 I've made coq au vin many times in my life, but I've always made it using regular chicken. One day soon I plan to buy one of these from the poultry vendor at the Saint-Aignan market and make the real thing. 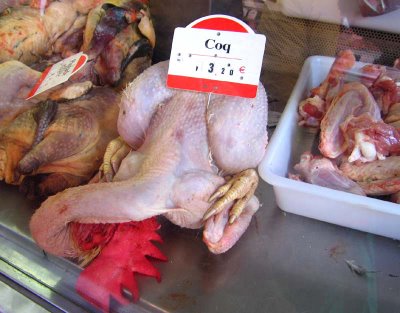 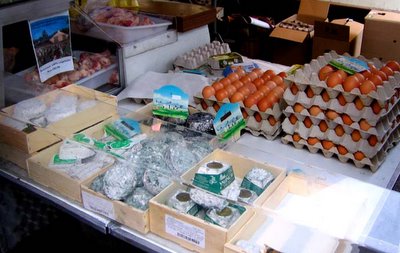 And the cheese ladies are right next door. It was hard to take a picture because so many people were crowded around their stand. This is the selection of hard cheeses -- Gruyère, Comté, Beaufort, and Emmenthal. We bought cheese here on Christmas Eve to make a fondue. 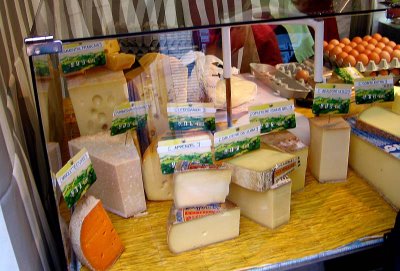 On the way back to the car after doing our shopping, we passed by this butcher shop, which is nicely decorated for the season. 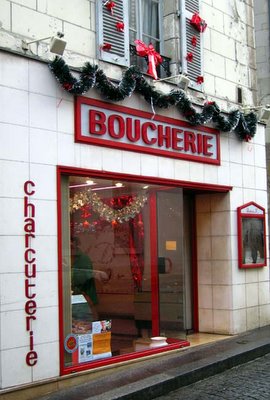 And there was a little Santa Claus trying to climb into a window of an apartment along the street. 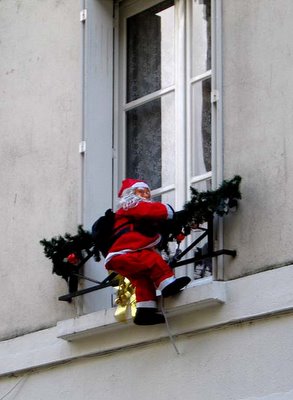 The oysters we bought are for this evening's meal. When we got home, Walt arranged them all on a tray with a towel under them so that they are right-side up and the oysters are bathing in their own liquid inside the shells (on an oyster, the flatter shell is the top shell). That makes them happy, we think, and they will be better to eat if they are happy oysters. 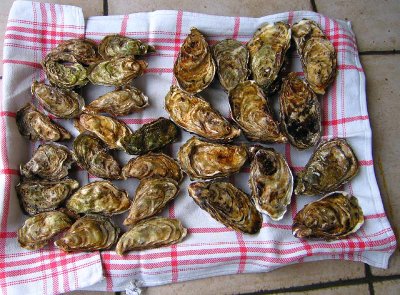 We'll eat them raw, on the half shell. We'll make a mignonette sauce -- that's vinegar, chopped shallot, and black pepper -- to eat with them. We'll also have fresh lemon so we can squeeze lemon juice on some of them instead of the mignonette, just for variety's sake. The other accompaniments are rye bread (pain de seigle) and sweet Normandy butter, along with a bottle of good champagne that a friend gave us as a gift (merci, Marie) last September.

We bought 30 oysters. That's a lot for two people. We won't open or eat them all tonight. Next week we plan to make fish and chips, because that's something we haven't had in a long time. I'm going to save out at least 6 of the oysters so that I can make fried oysters (with cornmeal breading) to dress up the fish and chips. Along with home-made tartar sauce. It will be an Anglo-American feast. Do you think they eat fried oysters in England, the way we do in North Carolina? I know they don't cook such things in France. Or didn't before I got here...