On one of my last trips to the U.S., in 2015, I decided to go to the theater in Paris along the way. The trips pretty much required me to spend a night in Paris or at the airport before taking a morning flight to the States. While I was preparing for the 2015 trip, I happened to see a TV interview with the French singer Sylvie Vartan. She was promoting a play she was starring in. I'd never seen her perform as a singer or actor, so I thought it was a good opportunity to do so. 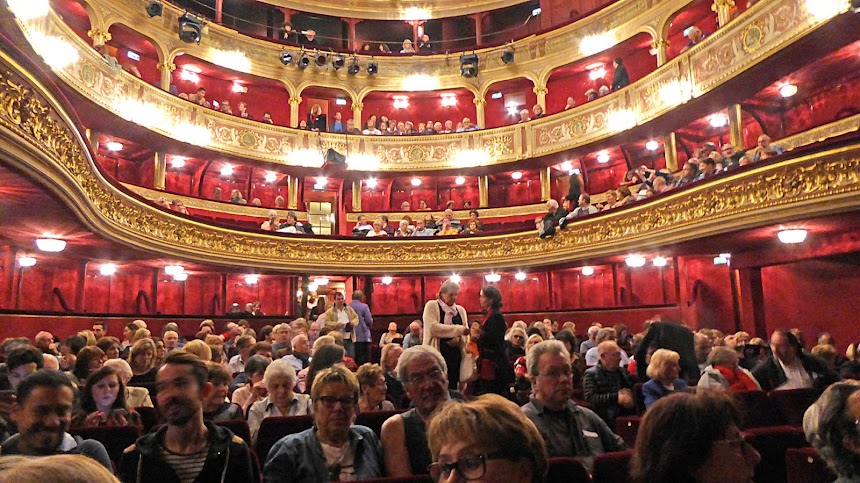 I booked a hotel room in the city, bought a theater ticket on line, and on the evening before my departure I spent about an hour walking across the center of Paris to the theater taking photos, including some of the nighttime images I've been posting for a couple of weeks now. When I got to the theater I was seated in the very first row. Before the performance began, without standing up, I held my camera up over my head and took this photo of the audience behind me. When the play was over, I walked back to my hotel in the Latin Quarter, taking more photos. Sylvie Vartan was born in Bulgaria in 1944. She has recorded 50 albums and 1,500 songs in all, in 8 or 10 languages. She has sold 40 million records over the course of her career. Her father was born in France and her mother was born in Hungary. She acted in her first movie when she was seven years old. Bulgaria was occupied by the Soviet Union after World War II, and her family decided to move to Paris in the early 1950s. Sylvie didn't speak French but learned it in school in Paris. She married the French superstar Johnny Hallyday in 1965. They were divorced in 1980, and Vartan moved to California in 1984. She has continued her career internationally and of course in France. The younger woman with her in the photo above wrote the play I saw and also acted in it. Her name is Isabelle Mergault and the play's title is Ne me regardez pas comme ça ! Here's a YouTube video of Vartan singing a Jacques Brel song.
Posted by Ken Broadhurst at 06:45