I'll get back to the Burgundy trip report soon. Right now, I want to post some photos I took in Paris, while the experience is fresh in my memory. I went there yesterday because I needed to get a document notarized (U.S. term; légalisé in French) at the U.S. Embassy on the Place de la Concorde. 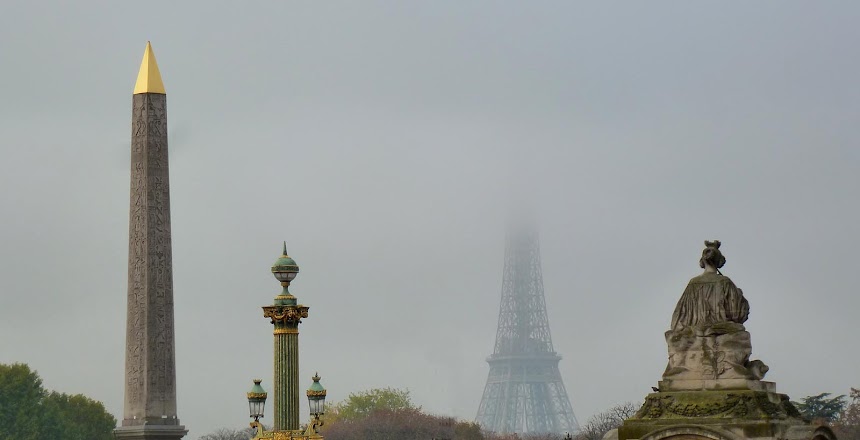 When I got to the Place de la Concorde at 10 a.m., the top of the Eiffel Tower, in the distance, was shrouded in low clouds.


Why the légalisation? Walt is going to start taking a retirement pension from California in December, and because California is a community property state, he is required to have a notification form signed by his spouse (me) and notarized. The spouse, by law, must be made aware of the pension being collected, and California wants proof. France doesn't have notary publics, so I had to go to the U.S. Embassy — the consulate, actually — to see a notary — a consul, actually — for the official stamp and seal.


To get an appointment at the U.S. Consulate — these days, you can't just walk in — you have to make an appointment weeks in advance for a specific day and time.There are two security checkpoints to go through before you can enter the building. You're not allowed to take any electronic devices in, so they have to be left at the second security desk. That includes cameras, computers, tablets, and mobile phones. The consulate says it can't be held responsible if any device is lost. I also was not allowed to take in a Chapstick that I had with me.

The traffic on the Place de la Concorde can look kind of chaotic, but it flows well.
That's the Eglise de la Madeleine in the background.


I arrived early for my 10:30 a.m. appointment and I had to wait around outside for 30 minutes before I could be admitted. When I did get in, there were at least 100 people seated in a big waiting room where there are a couple of dozen teller-style windows with big screens that display the ticket number of the current or next "customer" to be taken care of. People are there to get visas for travel to the U.S., new U.S. passports, or, like me, to get a document notarized or make a sworn statement in front of a consul. 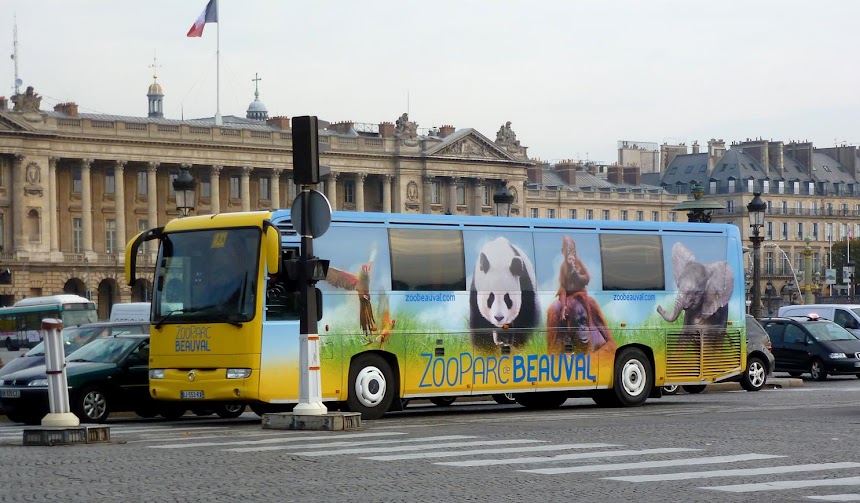 About the first thing I saw when I left the consulate was this bus. Maybe I could have hitched a ride home on it. The ZooParc de Beauval is just two miles from our house outside Saint-Aignan.


At 10:30 sharp, I was called to a window. The whole process took only 20 minutes — I was amazed, because in July 2013 I had to go make a sworn statement at the same place, and because I had an afternoon appointment, I had to cool my heals for a couple of hours. Morning appointments (a new feature) are the way to go, and getting there early to be the first in line really helps. I walked out with my notarized document, carrying the raised seal of the U.S. federal government. It cost me $50 U.S. 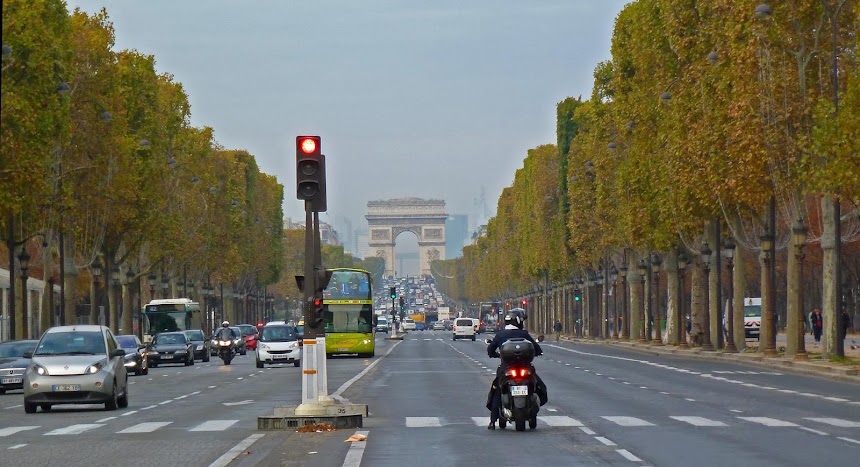 Looking up the Champs-Elysées to the Arc de Triomphe


Okay, I didn't plan to write all that. It just flowed out. The U.S. Embassy/Consulate complex is on the Place de la Concorde in Paris, just at the eastern end of the Avenue des Champs-Elysées and not far from the Louvre and the Seine. You can see the Eiffel Tower from there. The Place de la Concorde is an expansive space that is often filled with speeding cars and lumbering buses. I took some photos, above. Click or tap on the images to see them at a larger size.
Posted by Ken Broadhurst at 07:30