Leaving home in a hurricane

I know, that sounds more dramatic than it really was — but it's the truth. As we left home last Tuesday morning for the drive to Burgundy, what remained of that hurricane that hit Bermuda the week before was sweeping across northern France and the British Isles. It was blustery and rainy, which didn't augur well for our mini-vacation. 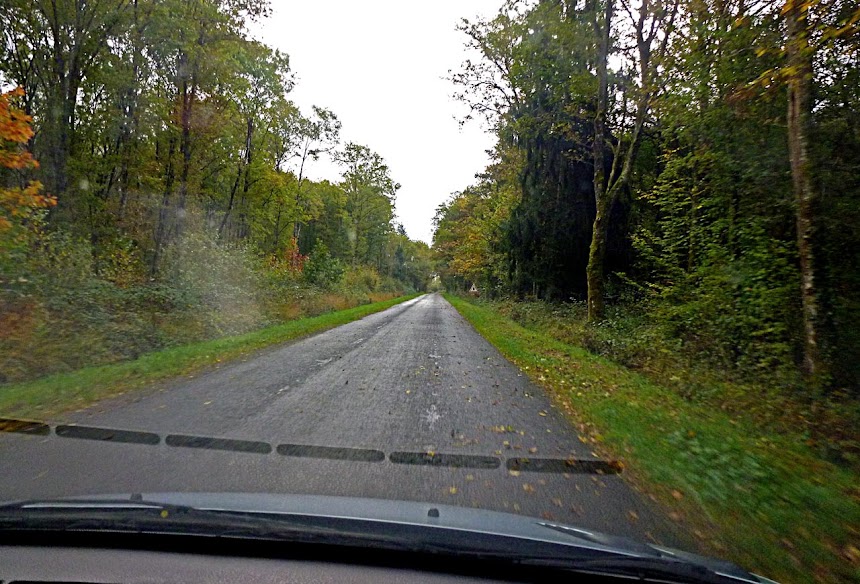 The drive is a straight shot through the forests of the Sologne region.


The drive takes about four hours. The northern part of Burgundy, centered on the small city of Auxerre in the département called l'Yonne is basically due east of our part of the Loire Valley. We headed out across the flat, forested Sologne toward the midway point of the trip, which took us past the wine village of Sancerre and on to the other famous wine village of Pouilly-sur-Loire. 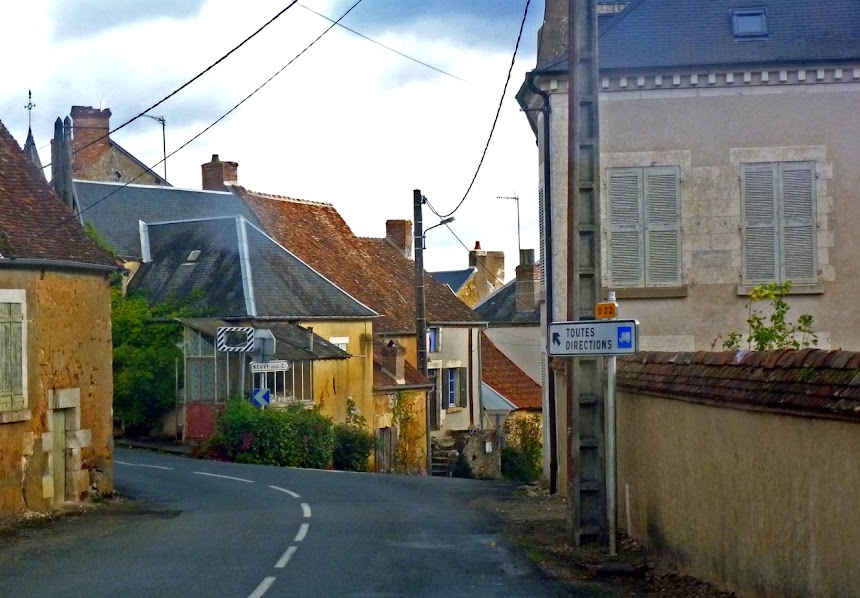 There are curved roads through the villages and towns along the way — which one was this?
Notice the sign that says Toutes Directions — a driver can't go wrong.


There's little or no car traffic in the Sologne woods, but you do have to be careful not to collide with animals like deer and wild boars. Such collisions usually occur at night, however, and we were traveling in broad daylight. We did see a deer or two during our trip, and I saw a fox standing next to the road at some point — I'm not sure, though, that it was on this particular day. 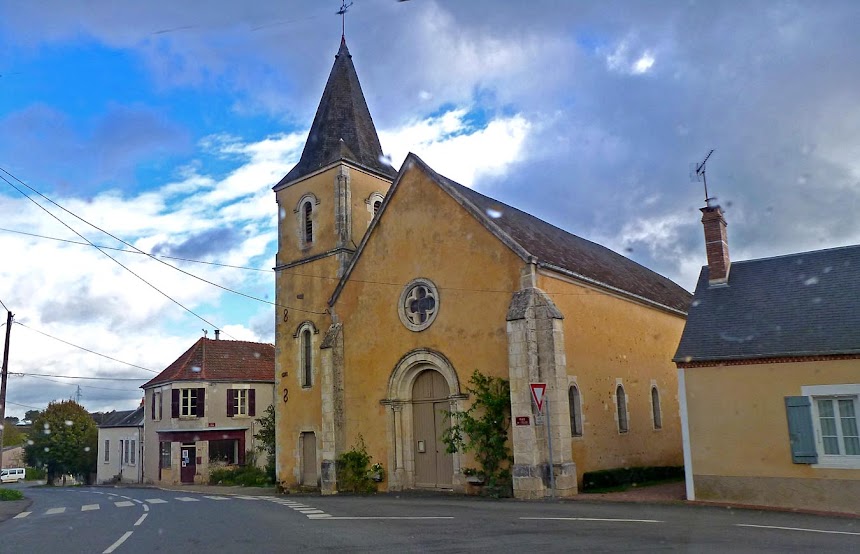 Every town and village has its church and a few businesses.


Other than the woods, the Sologne road takes you through a series of small towns and villages, including Theillay, Neuvy-sur-Barangeon, and Méry-ès-Bois, and then into the old Berry province through Henrichemont (a planned town dating back to the early 1600s), La Borne, and Neuilly-en-Sancerre. Each town or village as its own old church and its business selling farm equipment, along with a few shops like bakeries, groceries, and cafés. 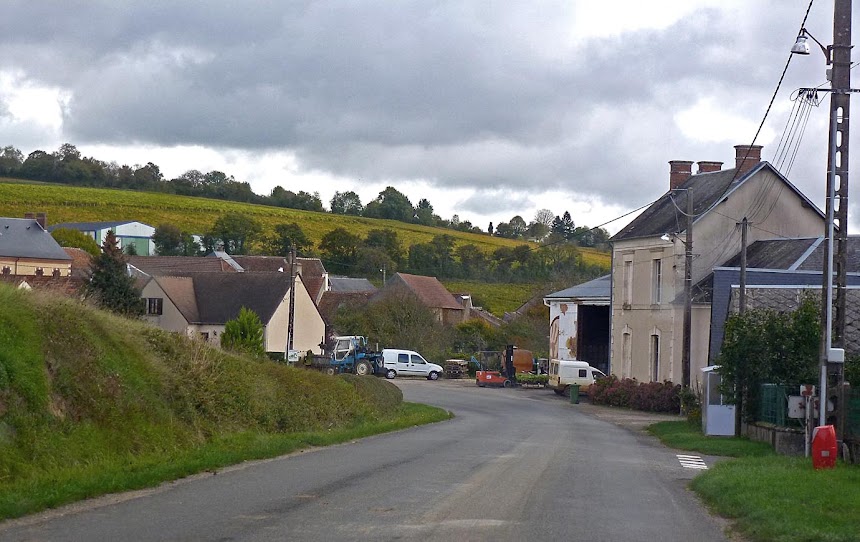 As you reach the eastern edge of the Sologne and approach the Loire River, you leave the flat country behind.


We planned to have lunch in Pouilly-sur-Loire, where I also wanted to pick up a bottle of a wine that I had never tasted before. It carries the name of the village and is made with a different grape, Chasselas, compared to the nationally and internationally known wine called Pouilly Fumé, which is made from Sauvignon Blanc grapes in the same area. 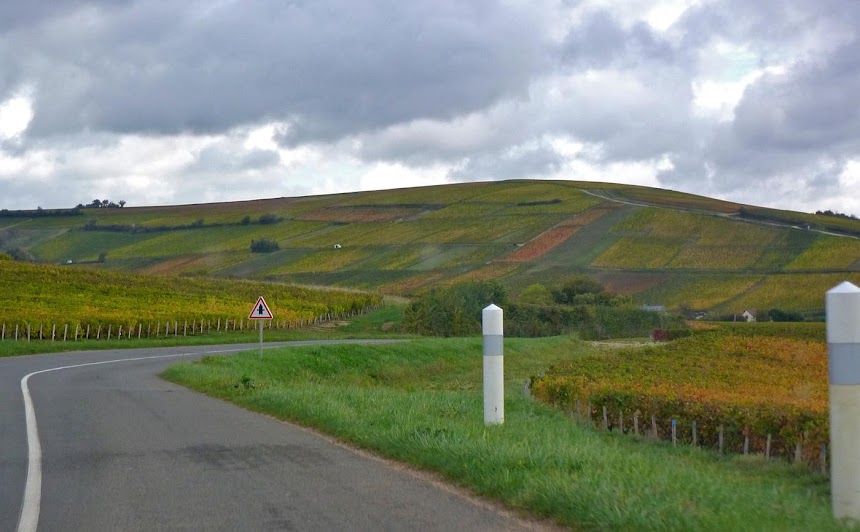 The Sancerre area on the west bank of the Loire is famous for its vineyards and especially for its Sauvignon Blanc wines.


By the way, I've been taking my finger splint off for several hours at a time for the past few days and carefully exercising the damaged digit. When it starts to ache, or when I plan to engage in some activity (including sleeping) that might put the finger at risk, I put the splint back on. This morning, for the first time since the accident happened back in August, I am typing on the keyboard using all ten fingers!