With the shortage of dentists in our region, sometimes it feels like the good practitioners have more patients than they can handle, as I said yesterday. That it is the less talented dentists who are still taking new patients would follow. I'm not sure that is true, however.


After the woman on the phone at the dental office in Meusnes said she wouldn't give us appointments, I went to the yellow pages. Well, pagesjaunes.fr, actually. (I recently noticed that the most recent telephone directory we have dates back to 2012. They must have stopped printing them now.) I figured I'd start with the Montrichard area, which is only a 15 minute drive down the river from us. There's a nice open-air market there, and there are two good supermarkets.


I found four dentists over there. I just picked one pretty much at random and called his office. His name is Klotz. Now if you pronounce it in French, it sounds more like "klutz" than like "clots." I couldn't resist a name like that, after buying my car from the Garage Danger in Saint-Aignan and getting my hair cuts from Madame Barbier for years. Walt's dentist in San Francisco was Dr. Hack, and he was a good one.


When we drove over the Montrichard last Friday, this is what we found. It's the building Dr. Klotz has his dental office in: 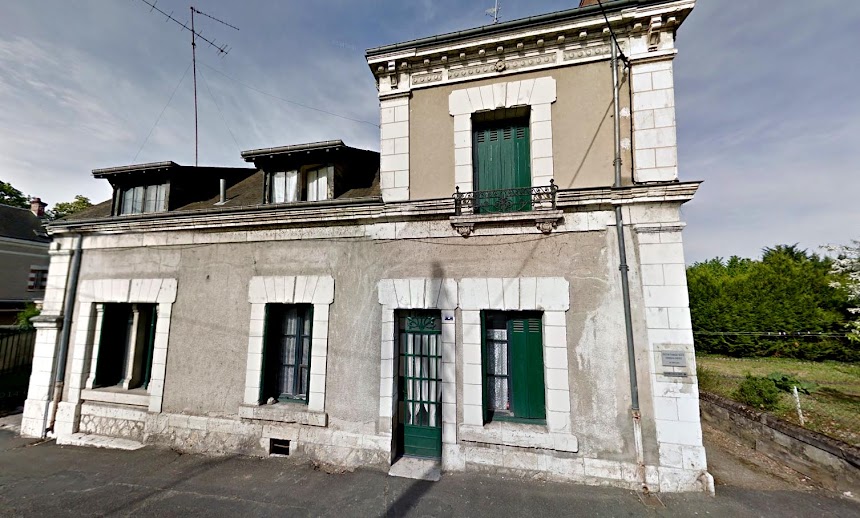 My first thought was: it's the Addams Family's house. I hope Dr. Klotz is not the dentist who treats Gomez, Morticia, Uncle Fester, and Lurch! That fear was reinforced when we saw the dentist's plaque, on the corner of the house, directing us down the gravel pathway on the right in the photo toward the back of the building. We didn't even get to enter through the front door.


My fears were allayed when we rang the bell and pushed the door open. There was a hallway and reception desk, all painted in a very clean white, and a white tile floor — all kind of sterile. The receptionist/dental assistant was charming, as she had been on the telephone when I called for the appointments. She gave us a form to fill out so that Dr. Klotz would have a record of our visit and know the name of our médecin traitant, what medications we take, and our contact information.

We sat down in the waiting room — just the two of us, since it was 8:30 a.m. — and not 10 minutes went by before I was called in to see the dentist. He was dressed all in white, as was his assistant, who came into the room with me. We chatted for a minute and I told Dr. Klotz, a 50-year-old man with a pleasant demeanor, that I was American, that I spoke French after a fashion (à ma façon), and that I'd spent a lot of my life living in France.


He first took a full set of x-rays and he announced to me that he didn't see any problems. My teeth are healthy and everything is in good condition. He then did the cleaning that I asked for, and he was thorough and careful. He gave me a tiny brush — sort of like a bottle brush — and said it would be better than dental floss when it came to cleaning between my teeth. I was so happy, and so relieved to have found a good dentist, finally, to replace the one in Saint-Aignan who retired two or three years ago.


The whole visit took less than half an hour. I thanked Dr. Klotz and went back to the waiting room to give Walt the thumbs up. He's great, I told Walt. And while he was getting his teeth x-rayed and cleaned, I went to the Netto supermarket down the street and bought a fresh supply of groceries. We were back at home by 10:30, just in time to get our daily bread from the bread lady.