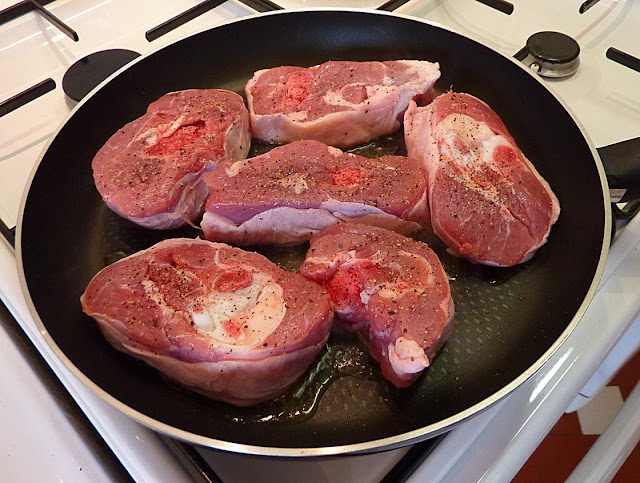 
When I went shopping at Intermarché last week, I saw a product in the butcher counter that I had never noticed before. It's not something totally new, because I've now found a lot of French-language recipes on the internet for cooking with it. Looking at the picture above, is osso buco de dinde something you would recognize? 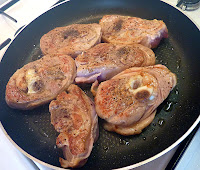 The meat looks like pork, doesn't it? It's not — it really is dinde. That's turkey. The little steaks with a bone in the middle are the equivalent of what we call jarret, or shank, when it's a cut of beef, veal, or lamb. The butcher has taken a big turkey thigh and sliced it, through the bone, into rouelles or "rounds." They're like thick slices of ham.


The Italian name « osso buco » means "bone with a hole (in it)". Buco is the same word as bouche, or mouth, in French. The bone has been sawed through, exposing the marrow inside. The dish called osso buco comes from Milan, from what I've read, and it's usually made with veal shanks and is often cooked and served nowadays with a tomato sauce and polenta.

Turkey stands in for veal in a lot of recipes in France. I remember being invited to dinner more than 30 years ago by a French professeur d'anglais who served us what appeared to be escalopes de veau (veal scalloppini). She was very pleased with herself as she announced to her American guests that they were eating not veal but turkey (it was delicious). At the supermarket nowadays, you can also buy turkey wings labeled as blanquette de dinde, replacing the traditional blanquette de veau or "white" stew.

I didn't know how good osso buco made with turkey would be, but for the price of the meat it was worth a try. And it turned out to be excellent. As you can see from the pictures here, you first sear or at least brown the slices of turkey in olive oil in a frying pan and then you cook them for a while in or on top of a tomato sauce containing a lot of mixed vegetables until the meat is tender and almost starting to fall apart.

The vegetables I used to make the sauce were diced onion, turnip, rutabega, and carrot. The first day, we ate the turkey and sauce with some brown rice. A couple of days later, we had some more of it with polenta (yellow "grits"). Since there were six slices of turkey in the package, and each one makes a good portion for one person, we still have two left, making for a third lunch. (The tomato sauce, from the freezer, was a product of last summer's vegetable garden).

Luckily, this kind of dish is something that is good eaten as leftovers.
The flavor actually improves with time — within reason, of course. It would be easy to freeze and probably wouldn't suffer from freezing and thawing. 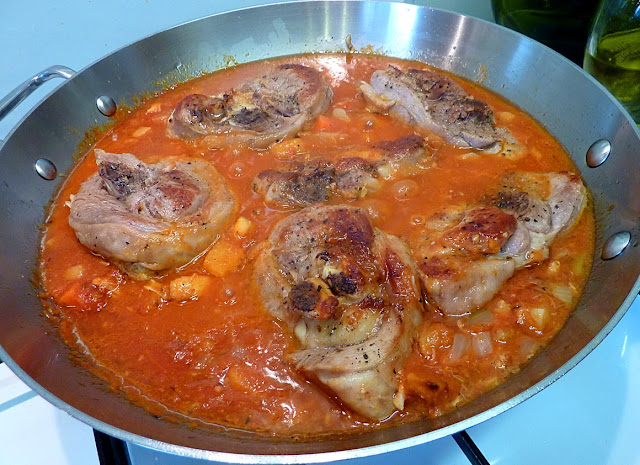 I wonder if you could get an American butcher to slice up a turkey thigh this way. 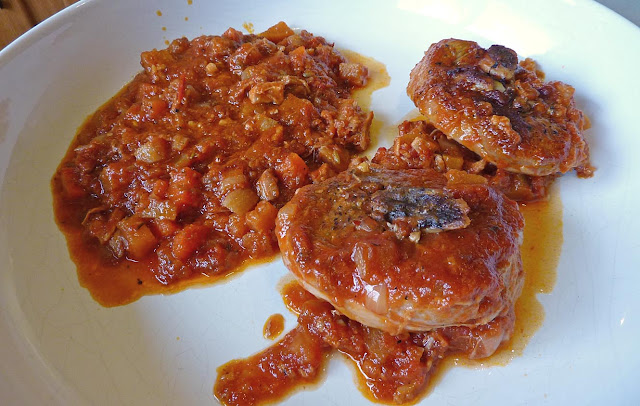 Don't forget the grated parmesan cheese, the bread, the red wine, and the green salad.
Posted by Ken Broadhurst at 07:45